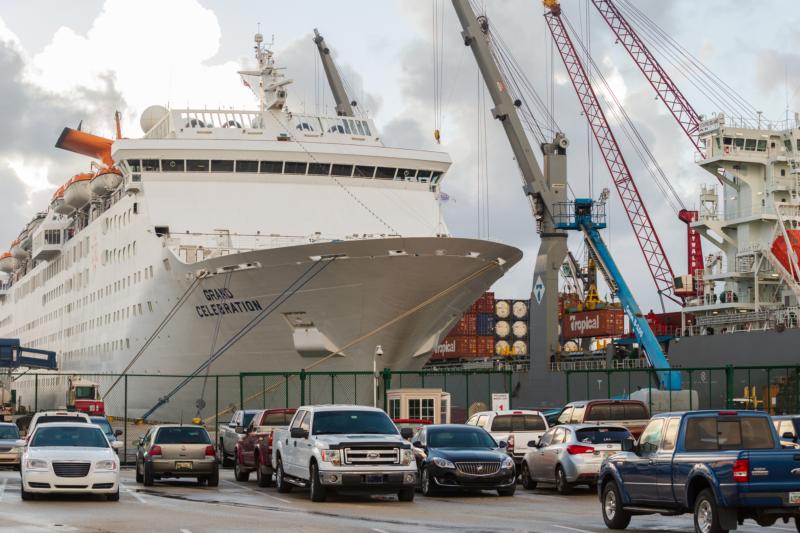 The Grand Bahama cruise ship stands ready Sept. 12, 2019, at the port in Palm Beach, Fla., awaiting its second Bahamas humanitarian cruise. It was set to sail Sept. 14 to deliver supplies and first responders to the Bahamas, before returning to Florida with more Hurricane Dorian evacuees. (CNS photo/Tom Tracy)

The previous week, the Grand Bahama cruise ship arrived at its home port in West Palm Beach with some 1,100 Bahamian storm evacuees. That ship was met by workers from Catholic Charities USA, along with members of the United Way, American Red Cross and Discover the Palm Beaches, which acts as a convention and visitors bureau.

The ship’s parent company, Bahamas Paradise Cruise Line, said it is canceling four upcoming tourism trips to accommodate one or more additional humanitarian cruises this month, according to a spokeswoman.

If the humanitarian mission isn’t postponed because of a pending tropical depression, it is expected to take up to 350 skilled volunteers, large scale generators for several areas in the Bahamas, supplies and 30 to 50 licensed electricians.

Bahamas Paradise Cruise Line has raised $542,280 of its $1 million goal to offset the humanitarian transport costs and loss of regular tourism business.

“As we all know, tourism is the most important industry in the Bahamas and we understand the lifeline it brings to residents across the islands,” said Oneil Khosa, CEO of Bahamas Paradise Cruise Line, in a statement.

The cruise line’s website points out that all evacuees going to Florida must have a valid unexpired government issued passport and visa. Exactly who could leave the Bahamas and enter the United States has been a matter of confusion and frustration since the hurricane.

On Sept. 9, the U.S. Department of Homeland Security issued guidance saying Bahamians arriving to the United States by sea needed a visa. Later it was reported that the U.S. would not grant Temporary Protected Status, or TPS, to people from the Bahamas displaced by Hurricane Dorian.

That TPS status would allow Bahamians to work and live in the U.S. until it is deemed safe to return home — as was the case with many victims of Haiti’s 2010 earthquake. Some 300,000 people from around 10 countries are reportedly living in the United States now under this program.

Meanwhile in the Bahamas, the government announced the missing persons figure count, as of Sept. 12, was at 1,300, down from a preliminary figure of 2,500, and the official death toll from Dorian at least 50.

After hovering over the Bahamas Sept. 1-3, Dorian rendered a high percentage of homes in the northern Bahamas region uninhabitable and left an estimated 10,000 people need of immediate assistance. Storm evacuees to the nation’s capital of Nassau have reportedly begun to strain resources there as the government struggles to house and care for thousands of new arrivals. One of the largest shelters is reportedly holding 1,500 evacuees and has reached capacity.

Meanwhile, the Bahamas is issuing statements that most of the rest of the nation remains open for tourism, which accounts for more than half of the country’s economy.