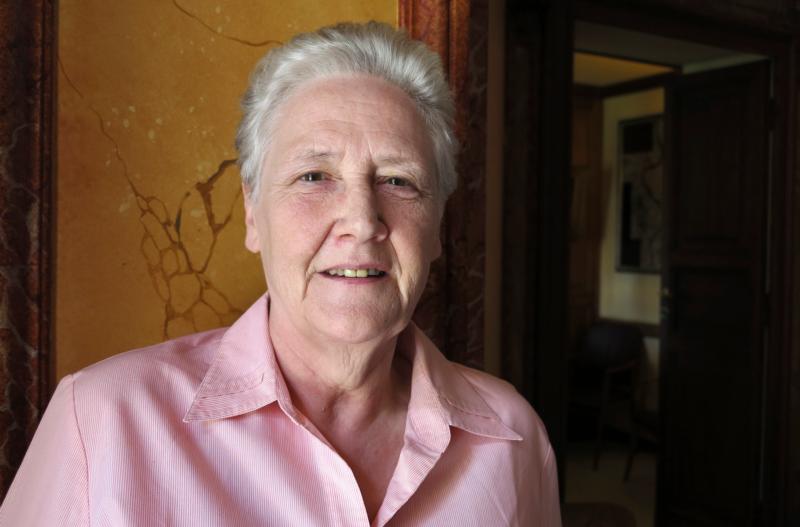 Marie Collins, a clerical sexual abuse survivor from Ireland and a member of the new Pontifical Commission for the Protection of Minors, poses for a photo during a conference on child protection at the Pontifical Irish College in Rome July 9, 2019. Collins kicked off a five-city U.S. speaking tour in Baltimore Sept. 10. (CNS photo/Carol Glatz) 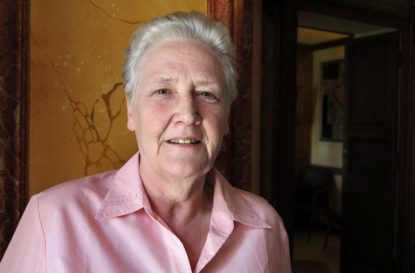 Marie Collins, a clerical sexual abuse survivor from Ireland and a member of the new Pontifical Commission for the Protection of Minors, poses for a photo during a conference on child protection at the Pontifical Irish College in Rome July 9, 2019. Collins kicked off a five-city U.S. speaking tour in Baltimore Sept. 10. (CNS photo/Carol Glatz)

BALTIMORE (CNS) — Clergy sexual abuse survivor Marie Collins kicked off a five-city U.S. speaking tour on “The Catholic Tipping Point” in Baltimore Sept. 10, noting that she is disappointed with the results of the Vatican summit on child protection and efforts toward accountability and transparency.

Collins, who was one of the original members of the Pontifical Commission for the Protection of Minors, resigned from that group in 2017 because she was concerned that promised reforms were not being implemented and Vatican leaders were impeding the commission’s work.

Speaking to a crowd of about 100 people at the First Unitarian Church of Baltimore, she said the abuse crisis has brought the church to a tipping point. “The church has come to a crossroads,” she said. “It’s got to decide where it’s going to go next because if it doesn’t change, it’s going to lose everything.”

And this change, she said, needs to come from the laity.

Collins told the group she had been molested by a hospital chaplain in Ireland when she was 12.

She said when she finally reported the abuse to a local priest many years later, she was told that she must have tempted the priest who abused her. The priest later lied about that meeting, she added.

Ten years later, she reported the incident to the Dublin Archdiocese and the hospital where the abuse occurred. The hospital offered counseling and reported the allegation to the police; the archdiocese said at the time that the priest had never had any such allegations against him, which was later was found to be false.

“I was lied to in the worst way,” she said. When the archdiocese made a statement that it had followed church guidelines in reporting and dealing with the abuse, Collins said she later met with the archbishop, who told her that the archdiocese was allowed to ignore the guidelines because they had no bearing in canon or civil law.

She said that Archbishop Diarmuid Martin, the next archbishop of Dublin, set up a strong child protection office — a “gold standard” that other bishops should follow. At the archdiocese’s invitation, she joined a committee drafting child protection guidelines. “You can’t criticize if you’re not willing to help if asked,” she said. The committee later voted to disband when the committee was encouraged to weaken the document.

In 2014, she was invited to be part of a new Pontifical Commission for the Protection of Minors, and she agreed to participate in the group, which was half laypeople and half clergy. Collins was the only member who was a survivor of clergy sexual abuse.

“Sadly, the promises were not kept,” she said. The commission could not get adequate staffing and resources or access to other Vatican departments. She resigned in 2017 when she said it was clear the commission wouldn’t be able to do what it had intended.

She praised Boston Cardinal Sean P. O’Malley, who chaired the commission, for doing what he could. “I don’t believe he’s a liar,” but she thinks Pope Francis has people “whispering in his ear” who don’t have the best interests of children as a priority.

“I believe the pope is doing his best,” she added, “but I believe he’s not being told the truth.”

She said she met with Pope Francis when he visited Dublin in August 2018 for the World Meeting of Families and on his flight back to Rome, she said the pope said: “Marie Collins is fixated about accountability.”

She also told the Baltimore audience that the church “cannot continue to be an institution where clerical secrecy and total dysfunction can continue.”

The church needs to remove anyone who would abuse children, she said. “They should all be cleaned out and any colleagues who protected them.”

The laity have power in the church, she said. “It’s our church. It’s our children. We must act.”

NEXT: Clericalism at heart of crisis, says survivor, but its ‘day coming to end’