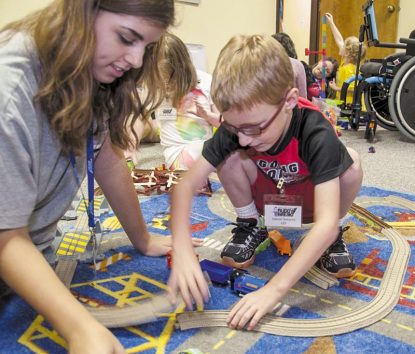 A volunteer helps Samuel Roberts put together a train track Aug. 19, 2016, at a free child care center at St. Stephen Church in Old Hickory, Tenn. In February, Sen. Elizabeth Warren, D-Mass., a leading Democratic presidential candidate, unveiled her plan for universal child care, which she said would be paid in part by an “ultra-millionaire tax.” (CNS photo/Theresa Laurence, Tennessee Register)

WASHINGTON (CNS) — In February, Sen. Elizabeth Warren, D-Massachusetts, a leading Democratic presidential aspirant, made a splash when she unveiled one of her many plans, this one on universal child care.

It may have gotten lost in the pileup of plans laid out subsequently by Warren and a raft of other presidential hopefuls. But the question is whether Warren’s child care proposal has the secondary effect of being a pro-life plan.

Not that Warren herself would call it pro-life; in May, she revealed another plan, about three-fourths as long as the child care plan, titled “Congressional Action to Protect Choice.”

Still, the child care plan deserves scrutiny under a pro-life lens, especially given the reasons why women say they get abortions.

In a Guttmacher Institute survey conducted in 2004 — the last time such a poll on this topic was conducted — economic reasons are cited most often and are in the highest percentage of responses. Women were asked to name up to four reasons.

It’s not as if Congress has been paralyzed by inaction on child care like it has on so many other issues. Last year, it passed a $2.4 billion funding increase for the Child Care and Development Fund, which was signed into law by President Donald Trump, The total kitty got raised to $8.1 billion distributed to states to fund child care for low-income families. Even a decade of funding at that level represents a slender fraction of the estimated $687.5 billion federal outlay Warren envisions for her plan over 10 years.

What the federal government cannot or will not do, at least for now, states are interested in picking up some of the slack. Fifteen governors were elected last November on platforms that included improvements in early childhood development. Many of the successful governors pledged funding for universal or optional public pre-kindergarten programs for 4-year-olds as part of their campaign platforms.

The issue resonates among voters. A 2018 poll conducted by GBA Strategies, a public opinion and strategic consulting firm, found 54 percent of parents called finding quality, affordable child care in their area either a “somewhat serious” or “very serious” problem, with the numbers spiking for parents of minor children of any age — including 83 percent of parents of kids under age 5.

Moreover, 64 percent agreed with the statement that “we need to raise the bar on quality, safety and reliability at all child care centers” and “government has a critical role to play” on the issue, while 68 percent agreed that “our public policies should be designed to help families afford the costs of child care and early learning.”

Which brings us back to the Warren plan, under which “the federal government will pick up a huge chunk of the cost of operating these new high-quality options,” she says. “That allows local providers to provide access for free to any family that makes less than 200% of the federal poverty line. That means free coverage for millions of children.”

For those with more income than that, child care costs would be “capped at no more than 7% of that family’s income,” Warren said. “That’s a heck of a lot less than what most families are paying for high-quality child care now.” She cited percentages of 9% to 36% of a family’s total income as typical child care costs today for just one child, with the numbers going up for multiple children — and the costs exacting a huge toll on single mothers.

“Nobody would be required to enroll in this new program,” Warren said. “But right now, millions of families can’t take advantage of child care because of its cost — and millions more are draining their paychecks to cover high costs.”

She touts it as “a win-win-win.” “Parents get the security of knowing there are affordable and instructional child care options for their children. That gives them the freedom to choose the best work and child care situation for themselves,” Warren said. “Kids get high-quality early learning opportunities that put them on track to fulfill their potential.”

Meanwhile, “the economy gets a huge boost. More than a million child care workers will get higher wages and more money to spend. More parents can work more hours if they choose to, producing stronger economic growth,” she added. “And a generation of kids will get the early instruction they need to be healthier and more productive members of society after high school and beyond.”

The plan would be paid for what Warren calls an “ultra-millionaire tax” on those with a net worth of at least $50 million that would generate an estimated $2.75 trillion over 10 years.

Michael New, a visiting assistant professor of political science and social research in the Busch School of Business at The Catholic University of America in Washington, disputes the notion that Warren’s plan would have a secondary pro-life effect.

New said he has not seen evidence that “any kind of provision of government benefits — welfare, child care — has any impact on the abortion rate,” he told Catholic News Service Sept. 26, adding there’s “no substantive body of research providing universal child care of any kind” makes a difference.

He said a study soon to be published indicates that stronger enforcement of child support laws brings down the abortion rate, but “it’s only one study. It’s not wise to invest a lot of credence in one study.”

While “I don’t deny there’s an economic component” to Warren’s plan, New added, “we just don’t see the body of evidence.”

“Sen. Elizabeth Warren is correct that there are too many barriers facing mothers and fathers pursuing work-life balance and the possibility of both a fulfilling career and a happy family life. Access to child care is a critical way to strengthen American communities, especially to give mothers’ options when it comes to making life-affirming choices,” said a Sept. 26 statement from Tom Shakely, chief engagement officer of Americans United for Life.

He added, “If Sen. Warren wants stronger American families, she might consider an end to taxpayer funding of Planned Parenthood, America’s deadliest nonprofit. Every taxpayer dollar that can be repurposed from Planned Parenthood to instead support the life and flourishing of young Americans would be an important step toward making the dreams of Americans for a better life a reality.”

Kristan Hawkins, president of Students for Life of America, did not mention Warren by name, although her own statement, issued Sept. 25, addressed Warren’s plan.

“We need a national conversation on how to help young families prosper, after children are born and before. As an advocate for pregnant and parenting students, I invite politicians from every party to talk about how to help families prosper, and that includes families whose children are in the womb. Some ideas are going to be better than others, but it’s striking how so many who argue for government programs for young children don’t offer the same support to preborn children,” Hawkins said.

“There’s a cognitive dissonance among politicians who can’t see the humanity of a child before birth. I would ask politicians who call themselves pro-child and pro-choice at what point do you offer an infant your support and protection?” she added. “Our policy needs to support and embrace children, born and preborn, and their parents at every stage of life.”

Despite repeated attempts by CNS, Democrats for Life of America could not be reached for comment.