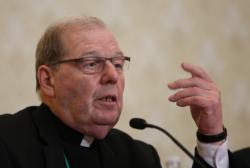 PORTLAND, Maine (CNS) — Bishop Robert P. Deeley of Portland said he was “saddened to learn” that physician-assisted suicide and taxpayer-funded abortions will not face a statewide vote “despite the great opposition” to both laws.

Maine is one of 23 states that provides citizens with a process for veto referendums on state laws.

Opponents of the law allowing assisted suicide and another requiring Medicaid and private insurers to cover abortions did not collect the required 63,067 valid signatures for each petition by a Sept. 18 deadline.

“Physician-assisted suicide, which failed in a statewide vote in 2000, desensitizes our young people and society at large to the inherent value of human life at a time when suicide rates are the highest that they have been since World War II,” Bishop Deeley said.

“Suicide should never be presented as an option, but only recognized for what it truly is, a tragedy,” he said in a statement issued Sept. 18.

“In addition, every Maine taxpayer will now be forced to fund abortions, coercing people to act against their moral beliefs and ethical principles,” he said.

“Understandably, outrage has grown since citizens have learned the true nature of this law. Abortion is not health care, and this law deprives families and individuals of the simple right to respect the dignity of human life,” Bishop Deeley said.

Had the required number of signatures been reached, the referendums on the two laws would have been on the Nov. 9 ballot or next year’s June 9 ballot, depending on when signatures were submitted and verified.

Maine became the eighth state legalizing physician-assisted suicide June 12 after Democratic Gov. Janet Mills signed legislation passed by the state House 73-72 and by the state Senate 19-16. The next day, Mills signed into law a measure forcing all public and private insurance companies in the state to cover abortions as part of prenatal care. This bill passed the House 82-59 and the Senate 19-16.

“These laws hold tragic consequences for individual citizens as well as contribute to a further deterioration of the common good,” Bishop Deeley said Sept. 18. “That the voice of Maine voters, whether they live in the very heart of the state or near any of its borders, will not be heard in a statewide referendum on both issues makes this a sad day for people of goodwill.”

“The principles at the heart of the church’s moral teaching on end-of-life decisions are important expressions of Christian reverence for the gift of the human person and are part of our well-founded hope for eternal life,” Bishop Deeley said.