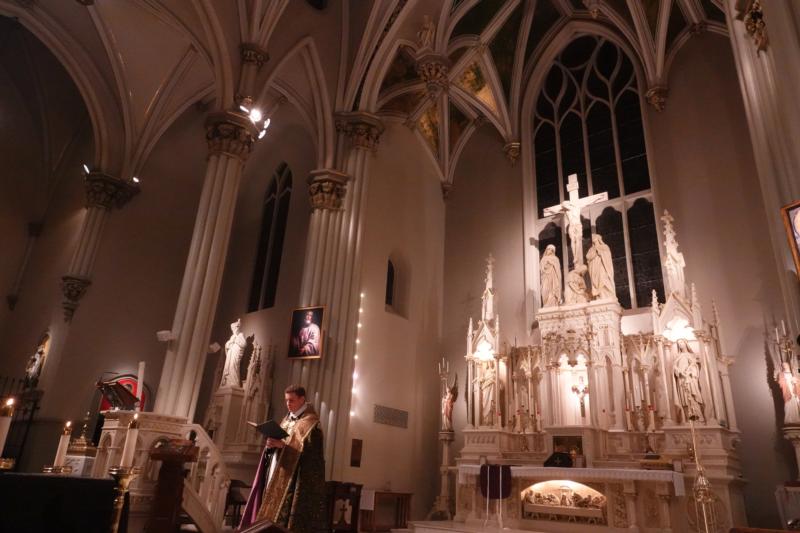 MEMPHIS, Tenn. (CNS) — On the night of a full moon Sept. 13, a high Mass in Latin was celebrated in remembrance of prominent Memphis historical figure Mother Mary Agnes Magevney (1841-1891) at St. Peter Church, sponsored by the Magevney Society.

She was the first child of Eugene and Mary Magevney, who arrived in Memphis when its population was only about 1,000. It is believed that the first Mass in Memphis was celebrated in their home.

St. Peter Church is in downtown Memphis, next door to the original Magevney family home, one of the oldest homes standing in Memphis. It has long been called “The Cradle of Catholicism” in Memphis.

Mary Agnes was baptized in the parlor of the home. It is the first Catholic baptism recorded in West Tennessee. She was educated at St. Agnes Academy in Memphis and later became a sister. In 1882, she traveled by train to Galveston, Texas, which was in dire need of teachers, to start the Dominican Congregation of the Sacred Heart.

The Mass celebrated was the extraordinary form, known as the Tridentine rite, and many of the women in attendance wore veils. Father Yoelvis Gonzalez, the celebrant, faced the altar.

Incense rose into the rafters as powerful sacred harmonies, sung by the Memphis Renaissance Schola, flowed down from the choir loft. The music for the liturgy was “Requiem Mass” composed by Tomas Luis de Victoria (c.1548-1611) and is considered to be his masterpiece.

“This is in fulfillment of one of her dying requests,” said Michael A. Beauregard, who founded the Magevney Society, a small group of Memphians who are trying to draw attention to the virtuous life of Mother Mary Agnes.

She suffered terribly toward the end of her life, offered up her suffering, and made a specific request on her deathbed for the faithful to offer Masses for her soul.

“I started researching her life more in-depth about three years ago and was captivated by her life of redemptive suffering and her piety,” he told Faith West Tennessee, Memphis’ diocesan magazine. “I desired to learn as much as I could about this person from our own city who clearly lived for the glory of God and worked for the salvation of souls.”

Remaining in the collection of her belongings is a handkerchief that was used to wipe away her last tears.

Some of the personal effects of Mother Mary Agnes were displayed at St. Peter after the Mass — some for the very first time — and will stay on display until mid-October.

“Mother Mary Magevney led an incredible life and she endured incredible sufferings for the good of others during her life,” said Beauregard. “We want to promote her life as a life of inspiration to others.”

The stories are well documented by firsthand accounts and it is through that information that so much is known about her life and especially her love of God.

Standing in the living room where Magevney was brought up, Benedictine Sister Deborah Coffey, of Holy Angels Convent, said many of the saints offered their suffering for the salvation of others. “Many of the great saints do that and this is another modern day example.”

This Sept. 13 Mass was celebrated “in fulfillment of her dying request to have Masses said for her soul,” noted Beauregard. “She is the first daughter of the Catholic Church in west Tennessee. Here we have a great individual in our own backyard and someone who is not well known.”

He called the Magevney House “truly a local treasure because of its age, history and its ties with early Catholicism in West Tennessee.

“One of the most interesting pieces in the house is the original bureau that was improvised as an altar in 1839 for the first Catholic Mass in Memphis (at least since the time the city was founded in 1819),” he explained. “I was captivated by her life of redemptive suffering and her piety.”

The Magevney Society members plan to wait and see how the Catholics of Memphis receive the story of her virtuous life. If people locally are interested in helping promote her life, at that point they may ask the church official open her cause for sainthood and grant her the title “servant of God.”

Editor’s Note: A video of the Mass can be viewed online here.

PREVIOUS: ‘They have lost absolutely everything,’ say volunteers back from Bahamas