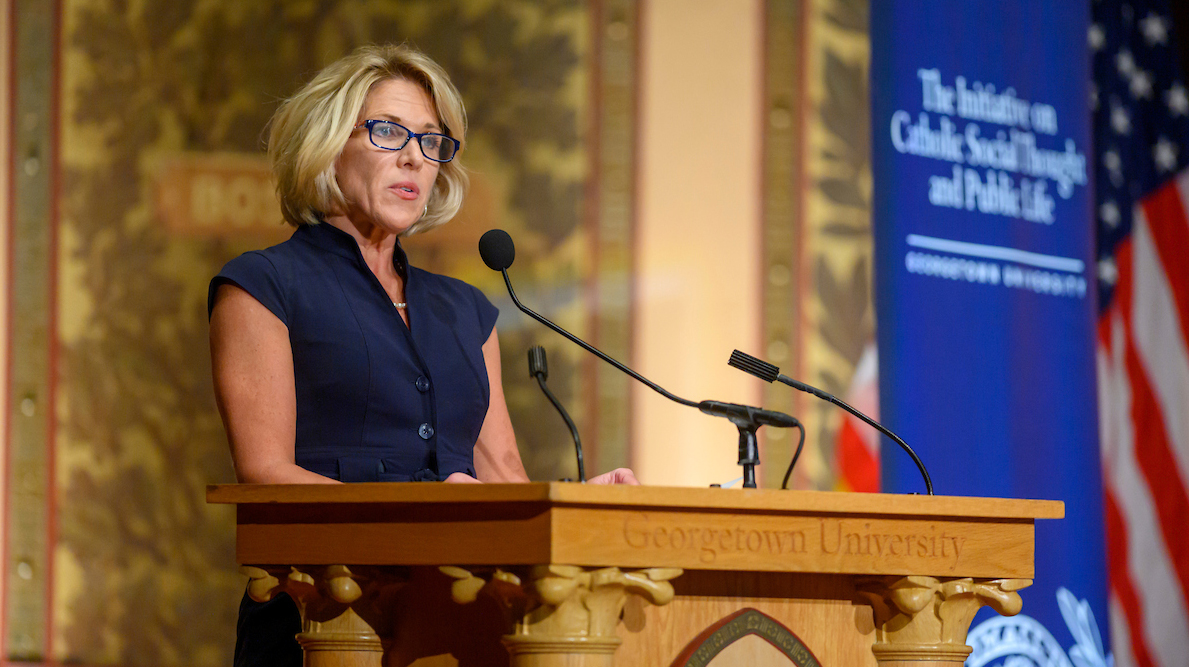 WASHINGTON (CNS) — Facing the challenge of the migration crisis will require voices and actions taken up in solidarity with migrants across the globe, said a speaker at a Sept. 11 dialogue on immigration at Georgetown University.

According to statistics reported by the U.N. High Commissioner for Refugees, by the end of 2018, “70.8 million individuals have been forcibly displaced worldwide as a result of persecution, conflict, violence or human rights violations.”

“These are unprecedented numbers, the largest in human history,” said Maura Policelli, executive director of the Washington office of the University of Notre Dame’s Keough School of Global Affairs.

She opened the dialogue on “The U.S. Response to the Global Migration Crisis: Human Costs, Moral Implications and Policy Choices.” It was hosted by Georgetown’s Initiative on Catholic Social Thought and Public Life and Notre Dame’s Keough School, marking their first partnership.

In convening the dialogue, held on the 18th anniversary of 9/11, John Carr, director of Georgetown’s Initiative on Catholic Social Thought and Public Life, remarked that to commemorate the anniversary, students had planted 3,000 small flags on campus to honor the lives lost in the terrorist attacks.

He recalled the horrific scene of the World Trade Center’s twin towers collapsing that day but also the recent, equally unforgettable scene highlighting the current immigration crisis — the image of a father and young daughter drowned together in the Rio Grande.

The Catholic response to this crisis, Carr said, is guided by the biblical principles of welcoming the stranger and upholding the dignity of immigrants and refugees as children of God.

The four panelists participating in the dialogue were Denis McDonough, who served as the White House chief of staff to President Barack Obama; Carlos Curbelo, a Republican from Florida and former member of the U.S. House; Aryah Somers Landsberger, a researcher on migration issues and advocate for immigrants and refugees; and Mizraim Belman Guerrero, a DACA recipient and a politics major at Georgetown University.

Guerrero, who is in the Deferred Action for Childhood Arrivals program and is a member of the class of 2020, told how his family left their small town in Mexico when he was a young boy, seeking work and educational opportunities in the United States.

He described the harrowing journey made by him, his mother and older brother across the desert and then the Rio Grande in 2003 to join their father who had been working in the U.S. to support his family.

Guerrero described pressures family members face being in the country without documents.

He recalled the time his father was detained after a traffic violation and put in deportation proceedings, but after a lengthy legal battle was able to gain a work permit. When his grandmother died in Mexico, Guerrero said, their family could not return for her funeral, out of fear that they would not be allowed back in the United States.

“We often don’t think about the real human cost of these situations,” said Guerrero, who added he is inspired by the example of hard work and resiliency of his parents and other immigrants. As a student, he has been involved in immigration advocacy groups.

In 2014 when Obama visited Austin, Texas, where the Guerrero family lived, he and his brother spoke out about the fears of deportation faced by their family and other immigrants. The president met with them afterward.

McDonough, now an executive fellow of the Keough School’s Global Policy Initiative at Notre Dame, has been an outspoken critic of the Trump administration’s policy of separating families at the border.

The policy also has been criticized by Catholic Church leaders and immigration advocates. They also oppose the current administration’s restrictions on immigrants seeking asylum and a proposal to further decrease the number of refugees accepted into the United States.

“For us, we know that the cruelty we’ve seen at the border does not deter people from traveling here. … people want something better for their kids,” McDonough said.

He also addressed criticisms of the Obama administration’s deportation numbers, saying “we wrestled with where to find the right position” in balancing U.S. sovereignty over its borders with the understanding of the U.S. as a nation of immigrants.

He said the Obama administration ultimately decided to prioritize deportation of felons and of recent arrivals not in asylum proceedings.

McDonough encouraged the students and community members packing the Georgetown auditorium to become involved in the immigration issue and work for a positive outcome benefiting immigrants and refugees and the United States.

“Immigration works in this country. We’re all here because we came from somewhere else,” said McDonough, whose grandparents were immigrants from Ireland.

Seeing the human face of those impacted by immigration policies is vital, said panelist Landsberger. A native of Mexico, she co-wrote the UNHCR’s “Children on the Run” report examining the root causes of migration of unaccompanied children from Central America and Mexico to the United States.

The biblical mandate in her own Jewish tradition and in the Christian tradition to “welcome the stranger” can be difficult, she said, noting how throughout its history, the United States has enacted restrictive measures out of fear of immigrants, a narrative that seems to be repeating itself.

Later in response to a question from the audience, she said that U.S. military involvement in Central America had increased instability in that region, but U.S. humanitarian aid could be targeted toward addressing the root causes spurring people to leave those countries.

Now vice president of the advocacy group Grantmakers Concerned With Immigrants and Refugees, she expressed concern that people on both sides of the immigration debate are in their own “echo chambers,” and to move forward, she encouraged people in their communities “to reach out to people who disagree with you.”

“It will take time to rebuild our bipartisan civility and ability to listen to one another,” she said.

That point was echoed by Curbelo, who said: “The first thing we have to do is try to understand one another, especially in context of the immigration debate,” he said.

As a congressman, he had dinner with a family in the country illegally at their home, slept there overnight, then accompanied the family’s mother as she headed out early in the morning to the farm field where she worked. “The reason I did this (was) I wanted to understand what their life was like,” he said.

But Curbelo added that Americans who are fearful of immigrants or insecure about them need to be heard, too. “Their concerns need to be addressed,” he said.

Curbelo, whose family fled Cuba after the 1959 Communist revolution there, was born in the United States. His family fled, he said, because they felt they had no choice. Immigration, he said, “is a story about us. We all have a role to play.”

“As a Catholic, I feel particularly motivated” by faith to take action, he said.

“The United States has a right and responsibility to enforce its border and to honor the rule of law,” he said, while being “a compassionate nation that welcomes those in need.”

Passing comprehensive immigration reform, he said, “is fundamental to healing our democracy” and to foster healing in a divided country.

PREVIOUS: Clericalism at heart of crisis, says survivor, but its ‘day coming to end’