Clericalism at heart of crisis, says survivor, but its ‘day coming to end’ 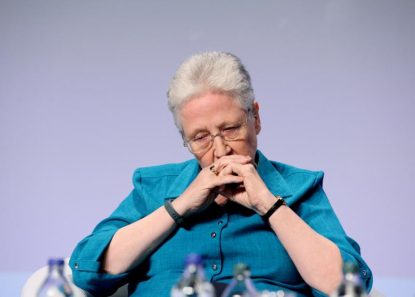 Marie Collins, a clerical sexual abuse survivor from Ireland and a member of the new Pontifical Commission for the Protection of Minors, is seen at the World Meeting of Families in Dublin Aug. 24, 2018. She is a survivor of clerical sex abuse and a former member of the Pontifical Commission for Protection of Minors. (CNS photo/John McElroy, courtesy World Meeting of Families)

BALTIMORE (CNS) — Vatican officials needed “a safeguarding policy” in place ages ago to prevent abuse and address it when it occurred, said Marie Collins, a clergy sexual abuse survivor from Ireland.

The promise for such a policy came out of the Vatican summit on child protection in February, but it never materialized, said Collins, who was one of the original members of the Pontifical Commission for the Protection of Minors.

For this reason and several others, she said was disappointed with the outcome of the summit.

“We had been told it would be about responsibility, accountability and transparency,” she told the Catholic Review, Baltimore’s archdiocesan media outlet, just prior to the kick off of a five-city U.S. speaking tour on “The Catholic Tipping Point” in Baltimore Sept. 10.

Collins, who resigned from the Vatican commission in 2017 because she was concerned that promised reforms were not being implemented and Vatican leaders were impeding the commission’s work, also found fault with the pope’s recent “moto proprio” — “Vos Estis Lux Mundi” (“You are the light of the world”). The document includes a number of protocols for addressing abuse claims, with the intent of holding church leaders accountable for actions or omissions related to the handling of such reports.

“It’s still bishops investigating bishops,” she said of the new norms. “Many would see that as just inappropriate and not the answer.”

She said a policy is “not worth the paper it’s printed on unless there’s some sort of consequence” for bishops who ignore the policy or are negligent in handling allegations of abuse.

“We’ve seen too much in the church now — far too many revelations of corruption on this level. The power is corrupted. We have moral corruption, financial corruption.”

Collins blamed clericalism, particularly those who feel “they can basically do anything and their colleagues will protect them,” but she said that “day is coming to an end.”

Prior to her talk at First Unitarian Church of Baltimore, she also met with Baltimore Archbishop William E. Lori and members of the Child and Youth Protection staff of the archdiocese and a few key members of the Independent Review Board that advises about child protection policies and procedures.

The 90-minute meeting allowed them to hear her perspective as a victim-survivor and to share with her information about the archdiocese’s child protection efforts.

“Ms. Collins underscored the importance of listening to victim-survivors and of meeting each of them where they are in their individual journeys of healing and of faith,” he added. “I am most grateful to her for her counsel and pray she will continue to be a courageous witness as together we seek to heal the wounds of abuse.”

Collins told the Catholic Review that she was impressed with the work the archdiocesan review board is doing, noting: “I wish it the same would be in every diocese, not only in America but everywhere there’s a Catholic Church.”

Msgr. Robert Jaskot, pastor of Holy Family in Middletown and St. Francis-St. Mary and the only clergy member of the archdiocesan review board, said it’s always tragic to hear the story of abuse and the lifetime impact on the victim-survivor and his or her family.

“Marie spoke beautifully and eloquently about the devastation in her life and her worth as a human being, and to begin healing — a process which will never be truly complete,” he said.

He said he was very grateful to Collins for sharing her story, pointing out: “There’s a healing in telling it and a healing in being able to share it.”