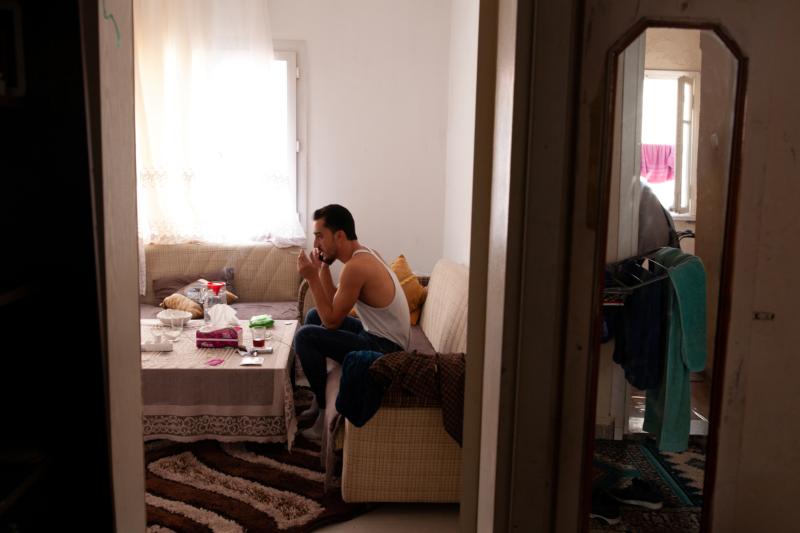 A Palestinian-Syrian refugee talks to a friend on the phone Sept. 28, 2018, in Izmir, Turkey. Refugee advocates are opposed to the decision announced by the Trump administration Sept. 26, 2019, that it plans to admit no more than 18,000 refugees in the next fiscal year, the lowest number since the resettlement program was created in 1980. (CNS photo/Ekaterina Anchevskaya, Reuters)

WASHINGTON (CNS) — Refugee advocates are opposed to the decision announced by the Trump administration Sept. 26 that it plans to admit no more than 18,000 refugees in the next fiscal year, the lowest number since the resettlement program was created in 1980.

“The U.S. must remain the beacon of hope to people who feel forgotten and abandoned by the world and maintain its status as a leader of refugee policy for all nations to follow,” said Dominican Sister Donna Markham, president and CEO of Catholic Charities USA.

A Sept. 27 statement by the organization said it “strongly opposes” the administration’s plans to “historically reduce the number of refugees welcomed into the United States” and urged it to “consider the refugee resettlement program’s mission to provide protection to those in need for humanitarian reasons.”

“The program should return to consistent refugee numbers rather than focus primarily on its use for partisan-based purposes,” the statement added.

The State Department released the refugee cap proposal and the White House issued a separate order saying states and localities must approve refugee resettlement in their regions before refugees can be sent to them.

A final decision on the number of refugees the U.S. will admit will be made after consultation with Congress.

“For our nation, which leads by example, to lower the number of refugee admissions for those who are in need is unacceptable,” he said in a statement Sept. 27. “Refugees are among the most vulnerable people, fleeing war, religious persecution, and extreme targeted violence. Turning a blind eye to those in need with such callous disregard for human life would go against the values of our nation and fail to meet the standards that make our society great.

“We also have deep concerns about the forthcoming executive order permitting state and city officials to turn away refugees from their communities. We fear the collateral negative consequences, especially for refugees and their families, of creating a confusing patchwork across America of some jurisdictions where refugees are welcomed and others where they are not.

He said the bishops urged the administration and Congress to work together to restore U.S. refugee resettlement to normal levels.

A breakdown of the proposed figure of 18,000 will allow 5,000 people fleeing religious persecution, 4,000 Iraqis, and 1,500 Guatemalans, Hondurans and Salvadorans into the United States in the next fiscal year, which starts in October. It also will allow 7,500 refugees from other countries to resettle in the United States, a senior Trump administration official told reporters Sept. 27.

The limit to the number of refugees accepted in the U.S. comes at a time when there are nearly 71 million displaced people around the world, according to the U.N. High Commissioner for Refugees.

A news release issued by the State Department Sept. 27 said the United States will likely receive more than 368,000 new refugees and asylum claims in the next fiscal year and it anticipates processing more than 350,000 individuals in new asylum cases.

The Trump administration has argued that the refugee limit does not impact asylum decisions since asylum claims are made when a person arrives in the U.S. and claims persecution, while refugees apply for admission to the U.S. from another country, but it has stressed that refugees and asylum-seekers draw on a pool of limited federal resources.

In the weeks leading up to the anouncement of the cap, there was speculation the administration would “zero out” the program and no longer take in refugees.

“Catholic Charities recognizes the need to establish humane policies for accepting people into the country,” said Sister Markham. “Any policy, however, should include generous provisions for accepting refugees who cannot return to their homelands.”

The Catholic Charities statement said it “stands ready to continue our long-standing partnership with the U.S. government’s humanitarian refugee resettlement efforts” noting that it has “nearly 110 years of experience serving refugees and showing that our nation can be secure and compassionate in responding to vulnerable people.”

On Twitter, after the refugee limit was announced, the Sisters of Mercy said: “This is unconscionable.”

And Joan Rosenhauer, executive director of Jesuit Refugee Service/USA, an advocacy agency for refugees and displaced people around the world, said: “The refugees I’ve met are hopeful, resilient people determined to build a bright future for their families. The U.S. should increase the number we welcome, not cut it as the administration announced today.”

A Sept. 27 statement from the Rev. Jennifer Butler, CEO of Faith in Public Life, an advocacy group of faith leaders based in Washington, said: “Our refugee neighbors and friends bless our faith communities immensely. Welcoming them is our nation’s moral responsibility.”

NEXT: Caring for the poor, the hungry ‘is who we are’ as church, cardinal says