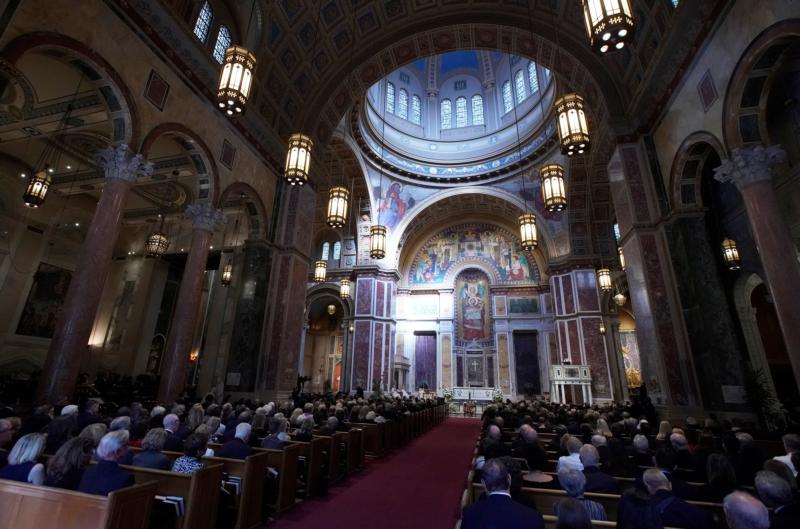 Family and friends attend the funeral Mass for journalist Cokie Roberts at the Cathedral of St. Matthew the Apostle in Washington Sept. 21, 2019. Roberts, who was the daughter of politicians and grew up to cover the family “business” in Washington for ABC News and NPR over several decades, died at age 75 Sept. 17, 2019, in Washington of complications from breast cancer. (CNS photo/Heidi Gutman, courtesy ABC)

WASHINGTON (CNS) — Noted broadcast journalist and author Cokie Roberts was remembered as a Washington icon, a national treasure and a woman devoted to her family and her faith as luminaries from the worlds of media and politics joined friends and admirers at her funeral Mass Sept. 21.

The Mass was celebrated at the Cathedral of St. Matthew the Apostle in the nation’s capital. Washington Archbishop Wilton D. Gregory was the principal celebrant.

Roberts, who had breast cancer, died Sept. 17 in Washington. She was 75.

“We give thanks for the time that Cokie Roberts graced this world of ours,” Archbishop Gregory said in his homily. “We rejoice in her humor, her conviction of faith, and her womanly ability to bring out the best in us — and to insist on nothing less. Thanks be to God for the time that he gave her to us.”

Mourners included Sam Donaldson, with whom she anchored ABC News “This Week” from 1996 to 2002; former NBC News anchor Tom Brokaw; and Bob Schieffer, the retired longtime anchor of CBS News’ “Face the Nation,” which, like Roberts’ program, aired on Sunday mornings.

Just as her family was central to Cokie Roberts’ life, they played a central role at the funeral Mass, with her husband, Steven, offering a heartfelt remembrance after Communion. Their daughter, Rebecca Boggs Roberts, read the first reading from Ecclesiastes, and their son, Lee Harriss Roberts, read the second reading from St. Paul’s Letter to the Thessalonians. And Cokie and Steven Roberts’ six grandchildren offered prayer intentions.

Another remembrance was offered by House Speaker Nancy Pelosi, D-California. “Cokie Roberts is a national treasure whose passing is a great loss for America,” she said, adding later: “Cokie was an American icon. She will forever be in the pantheon of the greatest professionals in her field.”

In his homily, Archbishop Gregory noted the impact of the Sacred Heart sisters on Roberts’ life, saying they helped form her as a woman who believed in and fashioned her life around God’s word, “and she also used her own words so exquisitely.”

Praising her faith, the archbishop said, “We grieve this day and will grieve for a great many days to come because a woman of faith who has touched us, loved us and taught us has been taken from us. … She was for so many — a wise woman of faith. She called us to be our better selves and she was quick to point out when we behaved as our lesser selves.”

Archbishop Gregory noted how Roberts challenged people of different ideologies to resolve conflicts by listening to each other and recognizing their dignity as human beings.

“She challenged us all to work together for the building up of this nation and our church and for the increase of everyone. She was unafraid of bishop or political figure and she delighted in letting both know that fact!” the archbishop said. “Her faith and determination to improve the church she loved and the nation that she cherished accomplished great good for us as individuals and as institutions.”

In her eulogy, Pelosi noted that she and Roberts had been friends since the days when their fathers served in the House of Representatives together. Roberts’ father, Rep. Thomas Hale Boggs Sr. represented Louisiana in Congress, as did her mother, Rep. Lindy Boggs, who later served as the U.S. ambassador to the Vatican.

“Cokie was raised in a family that believed public service was a noble calling,” said Pelosi, who praised the journalist for illuminating “the workings of Congress in the fairest way for all the people of America.”

Pelosi praised Roberts’ for her pursuit of truth as a journalist, and for writing books about the unsung heroines of American history whose stories were too long untold. She also praised her friend for inspiring “countless girls and young women to follow in her groundbreaking footsteps.”

Like Pelosi, many people have praised Roberts for being a role model to young women over her lengthy career, but the late journalist also came in for her share of criticism from pro-life women’s groups for her vocal support of legal abortion, especially as a Catholic.

In his remembrance about his wife, Steven Roberts noted how their family received many messages of condolence and gratitude since her death, including from a woman journalist whom she had mentored who said Cokie Roberts “used her power to empower others.”

Tracing her career as a radio correspondent for CBS to reporting on Capitol Hill and providing political commentary for NPR to serving as a panelist and anchor for ABC and then as a best-selling author, Steven Roberts said: “Even as she climbed the ladder of success, she always reached behind her to help others.”

Cokie Roberts, he said, was a true Christian, who treated people, especially those who were not wealthy or famous, with respect. He noted how her face lit up with “the incandescent smile we’ve all loved so long,” when before her death, she saw a photo of the young children of the nurse who was caring for her. That, he said, typified how Cokie Roberts opened her heart to others, to “make the world a better place.”

NEXT: Indiana launches investigation after discovery of aborted fetal remains