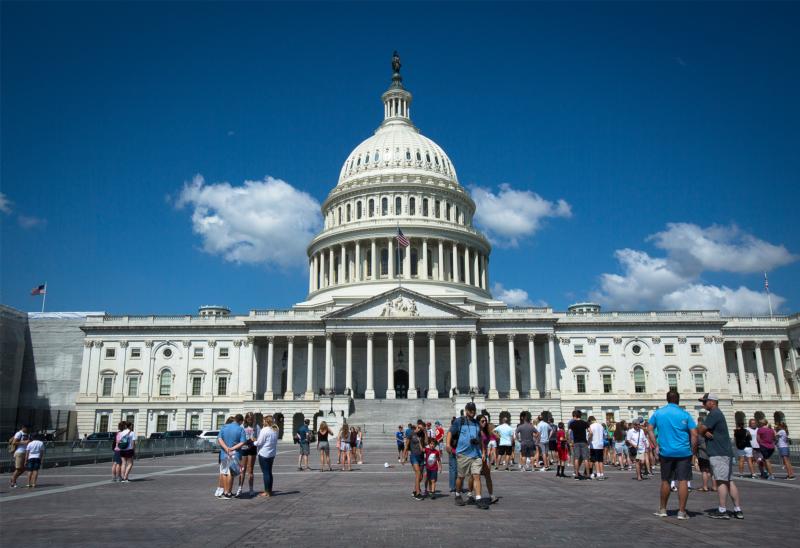 The U.S. Capitol is seen in Washington July 24, 2019. At a Sept. 10 hearing on the Born Alive Abortion Survivors Protection Act, pro-life members of Congress called on the House “to vote now and approve this humane, pro-child, human rights legislation.” (CNS photo/Tyler Orsburn)

The bill, which would protect babies born alive in failed abortions, “makes clear that no mother of a child born alive can ever be prosecuted,” noted Smith, who is chair of the Pro-Life Caucus. “And it empowers the woman upon whom the abortion is performed to obtain appropriate relief in a civil action.”

In his remarks, Smith described the case of Sycloria Williams, who went to an abortion clinic in Florida. During the abortion, her baby girl was delivered live at 23 weeks, he said. “The clinic owner took the baby who was gasping for air, cut her umbilical cord, threw her into a biohazard bag and put the bag in the trash.”

“Heartbroken, Sycloria later had a funeral for her baby girl,” whom she named Shanice, he said, adding that in Florida in just one year — 2017 — 11 babies were born alive during abortions.”

“Shockingly only six states — Florida, Arizona, Michigan, Minnesota, Oklahoma and Texas — currently require the reporting of children born alive who survive abortion,” Smith said in his remarks at the hearing. “Why the cover-up?”

He quoted Dr. Willard Cates, former head of the Centers for Disease Control and Prevention’s Abortion Surveillance Unit, as saying that such live births “are little known because organized medicine, from fear of public clamor and legal action, treats them more as an embarrassment to be hushed up than a problem to be solved.”

“The tendency is not to report because there are only negative incentives,” said Cates.

Smith also pointed to “an outrageous paper” published in 2012 in the Journal of Medical Ethics by bioethicists Dr. Alberto Giubilini and Francesca Minerva in which they said: “When circumstances occur after birth that would have justified abortion, what we call after-birth abortion should be permissible.”

The congressman said advocates of abortion “are now aggressively legislating to extend the violence after birth” and pointed to New York state and Illinois as examples. Early this year, New York Gov. Andrew Cuomo signed into law a bill to allow abortion until birth. The law also removes penalties “for infanticide of any child who survives,” said Smith.

Illinois also repealed its born-alive protections, he added, and 14 other states have no protections for abortion survivors in place.

The Born Alive Abortion Survivors Protection Act “seeks to end or at least mitigate this egregious child abuse,” Smith said, “by requiring that a health care provider must ‘exercise the same degree of professional skill, care and diligence to preserve the life and health of the child as a reasonably diligent and conscientious health care practitioner would render to any other child born alive at the same gestational age or be fined and/or face up to five years in prison.'”

According to the Susan B. Anthony List, a national pro-life organization, Democratic leaders in the House have refused more than 80 requests by pro-life Republicans for “unanimous consent” for the House to consider the measure.

A discharge petition filed by Scalise to hold a vote on the bill has garnered 201 signatures. If a majority of the 435 representatives sign the petition, it will force a vote by the full House.