A day of visiting the unwelcome, and a call to give them hope 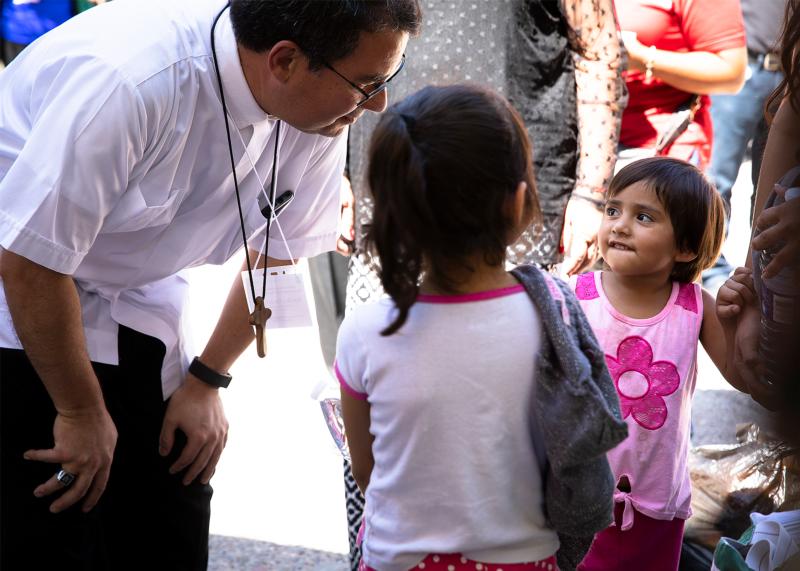 Bishop Oscar Cantu of San Jose, Calif., greets a child waiting for a bus at the Casa del Migrante shelter in Ciudad Juarez, Mexico, Sept. 24, 2019. Several dozen migrants from Central America were returning to their home countries on a bus that day, after giving up on entering the United States. (CNS photo/Tyler Orsburn)

CIUDAD JUAREZ, Mexico (CNS) — Up until July, 30-year-old Ingrid had a successful career as a pharmacist in her native Nicaragua. She owned a home, where she raised her two boys, ages 12 and 8, and expected to always remain in the country she so loved.

However, political strife led her to join in nonviolent marches criticizing the government, seeking, as many Nicaraguans have done, to have a say in the country where she thought her children would grow up.

But in August, that dream came crashing down as threats against her, for participating in anti-government demonstrations, began to worry her more and more until one day she decided it was time to grab the boys and leave — for good.

“I came only with the clothes I had on,” the mother of two told Catholic News Service Sept. 24, after speaking with a delegation of bishops, staff members from the U.S. Conference of Catholic Bishops, lay ministers and others visiting the border region Sept. 23-27. “I left my entire life in Nicaragua.”

She thought she’d find some understanding and safety heading with her children toward the U.S., she explained, but she quickly found out she was wrong as she and her children felt the weight of the “Remain in Mexico” policy that tells asylum-seekers to wait in the neighboring country for their immigration court dates.

“It’s sad to arrive, to knock on the door and to have that door close without being heard,” she explained to the group visiting a Catholic church in Ciudad Juarez, which offered her help. The group included Bishop Mark J. Seitz of the neighboring Diocese of El Paso, Texas, Bishop Oscar Cantu of San Jose, California, Bishop Brendan J. Cahill of Victoria, Texas, as well as Father Robert Stark, regional coordinator of the Vatican’s Section on Migrant and Refugees.

She was one of many migrants the group met during the second day of a week of encounters with farmworkers, their families, asylum-seekers, refugees and other migrants in the border region near El Paso and neighboring Ciudad Juarez.

They spoke with Ingrid, whose last name is being withheld for her protection, met her children, and shared a meal with them and others as they heard the migrants’ plight.

But it wasn’t the only story of unwelcome they heard that day.

The group also visited Casa del Migrante, or House of the Migrant, a shelter in Ciudad Juarez, where bishops spoke with and blessed a group of immigrants returning to their home countries after the U.S. denied them entry or they had no hope of being allowed to enter.

Nelson Lopez, admittedly a bit dejected, waited in line at the shelter with others to board a bus provided by the United Nations’ International Organization for Migration outside the shelter Sept. 24 — a free service the agency provides to migrants.

He had tried to enter the U.S. for a month before giving up. His intent was to find a job that would help him provide an education for his daughter and better living conditions for his parents in Honduras, whom he financially supports, he told CNS.

He didn’t want to return to Honduras but after a while, he lost hope of entering the U.S. and started missing his family, he said.

All of the U.S. bishops, along with Ciudad Juarez Bishop Jose Guadalupe Torres Campos, blessed the group and spoke with some of them briefly before they boarded the bus.

“I’m sorry,” El Paso’s Bishop Seitz said to the migrants in Spanish. “As Christians, as good citizens, we should be ready to welcome those who need (help), but sadly, this is not the sentiment of the U.S. government at the moment.”

Maria Luna, who volunteers with migrant ministry in the Diocese of Yakima, Washington, said some of the stories of the day had been “very sad” and she understood the reasons that had made the migrants leave home.

Earlier in the day, Bishop Cantu had, in a homily, told the group of his family’s beginnings in the U.S., in a story that sounded similar to the situation faced by some of the migrants who had not been allowed to enter.

His father left his native Mexico with a sixth-grade education and headed north to the U.S., stressing the importance of faith and education among his eight children, he said. Having little opportunity in his native country, he told them to stay close to the church and to take advantage in the U.S. of the education and opportunities he didn’t have.

“I can imagine so many migrants saying that, wishing that for their children,” Bishop Cantu said.

He told the group to “keep the hope alive” for those trying to do the same for their children today.

“We see gross injustices, we see violence, we see a trampling of human dignity,” Bishop Cantu said. “And so the challenge for us today is to help brothers and sisters to live in hope. For some, that hope is the American Dream … giving to their children a better life than they have.”