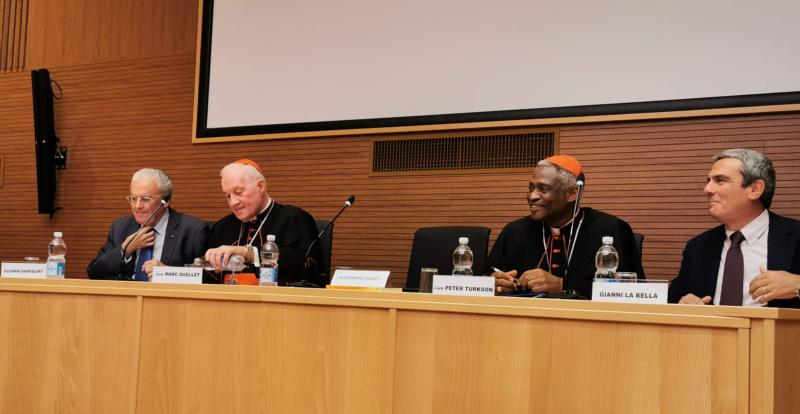 The Pontifical Commission for Latin America held the presentation of a new book, “The Emergence of Popular Movements: Rerum Novarum of Our Time” in Rome Sept. 24, 2019. Pictured are: Guzman Carriquiry, former secretary of the Pontifical Commission for Latin America; Canadian Cardinal Marc Ouellet, prefect of the Congregation for Bishops; Cardinal Peter Turkson, prefect of the Dicastery for Promoting Integral Human Development, and Gianni La Bella, professor of contemporary history at the University of Modena and Reggio Emilia. (CNS photo/Junno Arocho Esteves)

VATICAN CITY (CNS) — When engaging with popular movements, the Catholic Church must keep its focus on their work with the poor and not be dragged into ideological debates, a former Vatican official said.

While there are many grassroot organizations that work to ensure the dignity of poor men and women, there are some “who organize themselves to satisfy their own needs” or “carry strong ideological remnants into their radicalism,” said Guzman Carriquiry, former secretary of the Pontifical Commission for Latin America.

“It would be good, I would say, if in the next meeting there was a more careful discernment of the list of guests,” Carriquiry said. “Of course, we must keep in mind that we are not engaging only with Catholic movements; some are close to the church, some are far from the church and others are very far.”

Carriquiry was among several speakers at the presentation Sept. 24 of a new book titled, “The Emergence of Popular Movements: Rerum Novarum of Our Time.”

The book was prepared by the Pontifical Commission for Latin America and published in Spanish. “Rerum Novarum” was Pope Leo XIII’s 1891 encyclical on worker’s rights and is considered the foundational document for the church’s social teaching.

Canadian Cardinal Marc Ouellet, prefect of the Congregation for Bishops and president of the Pontifical Commission for Latin America, as well as Cardinal Peter Turkson, prefect of the Dicastery for Promoting Integral Human Development, also were present at the launch of the book exploring a series of World Meetings of Popular Movements held since 2014 and supported by Pope Francis.

In the preface to the book, which was published by the Vatican publishing house, Pope Francis praised the work of popular movements representing the poor, the underemployed, indigenous communities and farmworkers.

Such movements could bring about a “new humanism” that overcomes a lack of compassion and “the progressive eclipse of culture and of the notion of the common good,” the pope wrote.

“The antidote to populism and political showmanship lies in the efforts of organized citizens, particularly those who create in their daily lives — as is the case with so many experiences present in the movements — fragments of other possible worlds that fight to survive the darkness of exclusion,” the pope said.

Carriquiry said that Pope Francis’ meetings with popular movements are a continuation of the “great patrimony” handed down to the church beginning with Pope Leo’s encyclical.

Pope Francis’ teachings, he added, adhere to “the great principles of the social doctrine of the church: the dignity of the person, subsidiarity in the free participation in and organization of society, and solidarity, particularly with the most forgotten and vulnerable.”

These principles, Carriquiry said, “should not be limited to being proclaimed over again and repeated but should remain present in the tragic situations that popular movements reflect upon and fight against.”

PREVIOUS: A day of visiting the unwelcome, and a call to give them hope