Amazon synod could ‘have something to say’ to Canada, says CCCB official 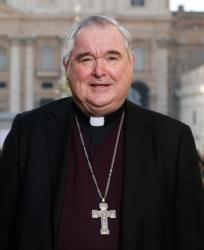 Archbishop Richard Gagnon of Winnipeg, Manitoba, vice president of the Canadian Conference of Catholic Bishops, poses for a photo near the Vatican Dec. 7, 2018. (CNS photo/Paul Haring)

CORNWALL, Ontario (CNS) — Canada’s bishops will monitor discussion about ordaining married men at next month’s Synod of Bishops for the Amazon, but the issue is not a priority in Canada, said Archbishop Richard Gagnon of Winnipeg, Manitoba.

“This hasn’t really been a focused topic in Canada in that way,” said the archbishop, vice president of the Canadian Conference of Catholic Bishops.

Archbishop Gagnon told a news briefing Sept. 23 at the annual CCCB plenary that the Amazon region is similar to Canada’s North in that both are sensitive ecological areas with vast resources and several distinct indigenous peoples. Like the Amazon, northern dioceses are made up of many remote communities in which people face threats to their way of life while coping with an acute shortages of priests.

The 45-page working document for the Oct. 6-27 synod proposes an examination of the possibility of priestly ordination for elders who are respected in the community, even if they are married. Pope Francis has said he opposes “optional celibacy” for priests, but wants to study ordination for married men in remote locations.

This suggestion has already stirred debate among some Catholics, who fear ordaining married men in any circumstance will lead to the eventual end of a celibate clergy.

Bishop Lionel Gendron of Saint-Jean-Longueuil, Quebec, president of the CCCB, was named Sept. 23 as a synod delegate by Pope Francis; he was unavailable to discuss the synod.

Archbishop Gagnon said Pope Francis, “being a good Jesuit, he raises certain topics and throws them out there, and then there’s a lot of discussion about that on various levels.”

The archbishop said the pope mentioned the issue of ordaining married men when Canada’s Western bishops made their last ad limina visit to Rome in 2017. He also raised the issue of “the role of women in the church at every level.”

“These are things we’ll hear something about in the Synod on the Amazon for sure,” he said. “I think the Amazon synod will have something to say to the church of Canada.”

Several Catholic bishops from northern dioceses have raised the issue of ordaining married men over the years, most recently in June interviews with The Catholic Register, because of an acute shortage of priests in far-flung communities.

None of the five bishops from northern dioceses raised the issue on the floor of the CCCB plenary. Instead, Archbishop Murray Chatlain of Keewatin-Le Pas requested the bishops in the rest of Canada loan northern dioceses more priests.

“It’s a big ask,” he said. “There are not extra priests lying around.”

Many dioceses have been relying on missionary priests.

“It is a challenge,” Archbishop Chatlain said, describing the difficulty of explaining to an African or an Asian priest what to expect when they land in a place like the Yukon.

All five northern bishops spoke of dioceses encompassing huge territories, serving small Catholics populations that house many indigenous communities. Transportation is mainly by plane and the cost is high. Other transport modes such as snowmobile or driving on winter roads can be dangerous, with no gas stations or motels amid changeable weather conditions.

“It is a feeling of tremendous gratitude for the generosity I have witnessed to this point,” Bishop Hansen said.

Living in the North is a constant struggle, said Bishop Robert Bourgon of the Hearst-Moosonee Diocese in northern Ontario. Medical services are virtually nonexistent, and food and other essentials are extra costly. He said the diocese has nine native peoples reservations that are not served.

NEXT: Mexican state lawmakers: Abortion no longer a crime in Oaxaca