Canadian: Becoming a cardinal intensifies ministry to people on margins 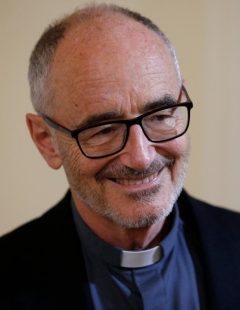 ROME (CNS) — Cardinal-designate Michael Czerny, a Canadian Jesuit who is one of Pope Francis’ point men for the pastoral care of and political advocacy for migrants and refugees, said becoming a cardinal is “an intensification” of his ministry.

Pope Francis will ordain him a bishop Oct. 4 and induct him into the College of Cardinals Oct. 5.

“This is not a new job, this is not a new assignment; it’s rather an intensification, a deepening, a broadening of the already ongoing mission” of assisting Pope Francis, especially by serving as one of two undersecretaries at the Migrants and Refugees Section of the Dicastery for Promoting Integral Human Development.

Being a cardinal makes that work more public, he told Catholic News Service Sept. 27. “You could even say in some ways it’s like a sacramental: It’s a sign that people can see and recognize and touch and talk to.”

People look at a cardinal as a concrete representation of the church, he said, and especially with migrants and refugees and other people on the margins of society, “if I can do that, I’ll be happy.”

Cardinal-designate Czerny said he does not know why Pope Francis decided to make him a cardinal, but he does know that as a 73-year-old who would be eligible to vote in a conclave to elect a new pope, church law requires that he be ordained a bishop before he receives his red hat.

So, the evening before the consistory to create new cardinals, Pope Francis will ordain him, assigning him as bishop of the “titular” diocese of Beneventum, a defunct diocese in what is now Tunisia. Cardinal-designate Czerny will hold the title for 24 hours; once he becomes a cardinal, he will have a “titular” church in Rome.

The soon-to-be cardinal noted that Pope Francis said he chose the 13 new cardinals to represent the variety in and universality of the Catholic Church. The pope, he said, also wanted “to give a new and powerful sign of hope to the men and women all over the world who feel enslaved, discouraged, trapped by their circumstances in life.”

The Canadian Jesuit came to his Vatican post after decades of ministry promoting the social teaching of the church, documenting human rights abuses in El Salvador and founding and directing the African Jesuit AIDS Network.

He said his 46 years of priestly ministry have been dedicated to trying to offer the church’s vision and truth of what it means to be human “to people who feel that life is passing them by or is going against them, to people who have little reason to hope or have had hope driven out of them.”

Pope Francis, he said, chose cardinals who have “experience and sensitivity” in the areas of ministry that are important to him.

Asked about priestly ministry and engagement in social concerns, Cardinal-designate Czerny said it flows from everything Christ meant when he said, “Do this in memory of me.”

“This refers to the breaking of the bread and the sharing of the cup, which is to say, his full giving of his full self to us so that we might have life and have life to the full,” he said.

“What is priestly about my life is the longing and the effort to bring life to different difficult social areas,” the cardinal-designate said. The struggles and injustices people face individually and as communities also “are part of what Christ wanted to save.”

NEXT: Accurate reading of presynod text shows nothing to fear, theologian says