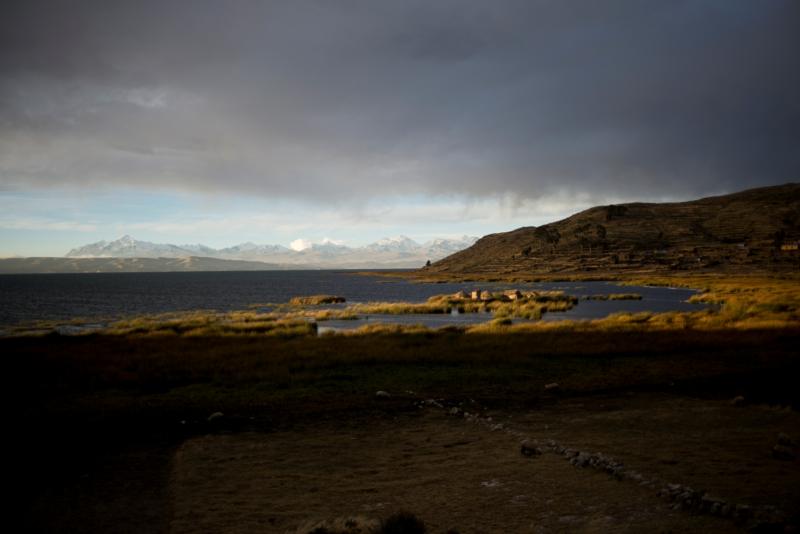 With the the Andes mountains in the background, houses built from totora plants are seen on a man-made floating island on Lake Titicaca in Bolivia July 3, 2018. Governments have an unprecedented “moral duty” to take urgent action to combat climate change, Catholic development agencies said before the U.N. Climate Change Summit. (CNS photo/Manuel Seoane, Reuters)

In a statement released ahead of the U.N. Climate Action Summit, which starts in New York Sept. 23, they described the rate of climate change as an emergency, a social crisis and an environmental catastrophe.

They said targets to reduce global warming were too low and said governments must seek to reduce carbon emissions by 65% if climate change was to be limited to a rise of less than 1.5 degrees Celsius by 2030.

A 2018 report by the Intergovernmental Panel on Climate Change predicted that a slightly higher increase would produce a rise in sea levels, flooding, heatwaves, famine caused by poor crop yields and the loss of habitats such as coral reefs.

The 20 organizations that signed the statement are members of CIDSE, an umbrella group mostly of Catholic aid agencies from Europe and North America.

In the Sept. 19 statement, the agencies accused governments of procrastinating “while the vulnerable suffer and our planet literally burns before our eyes.”

CIDSE claimed the targets of most countries were supposed to limit global warming to 1.5 C but, in reality, allowed “for over 3.5 C of warming.”

“Leaders must heed the title of the summit, Climate Action, and fulfil their moral duty,” the statement said.

“There is no lack of ideas — just, sustainable and well-researched — for governments to implement an ecological transition,” it continued.

“Communities, social movements and civil society organizations have a wealth of expertise in innovative models of food and energy production proven to work at scale, such as agroecology and democratic renewable energy systems.”

The statement expressed skepticism about a range of other proposed solutions to climate change, such as geo-engineering, climate-smart agriculture, hydrofuel, agrofuels, the use of coal and nuclear energy and large-scale bioenergy.

“It’s not enough to organize and participate in a summit, make some calls and recognize the emergency while doing little to address it,” it said.

“Bringing to scale the models and solutions proposed by civil society in policy at the national level would challenge the status quo of business as usual, but this is what has to be done. The scientific warnings will not cease,” the statement said. “The moral duty to act is unprecedented.”

It noted that Pope Francis declared a climate emergency June 14, and “hundreds of thousands of youths and adults will unite to strike” Sept. 20 in New York and around the world. “They deserve an answer and response to their calls.”

The groups that signed the statement included CAFOD of England and Wales, Trocaire of Ireland, Sciaf of Scotland, Maryknoll Office for Global Concerns of the USA and Development and Peace of Canada.

The summit will bring together about 60 nations that wish to build upon commitments made to tackle global warming under the 2015 Paris Agreement.

“We are losing the fight against climate change,” he said. “I expect that there will be the announcement and unveiling of a number of meaningful plans on reducing emissions in the next decade and achieving carbon neutrality by 2050.”

NEXT: Integral ecology: Challenging people to broaden their focus of concern