Integral ecology: Challenging people to broaden their focus of concern 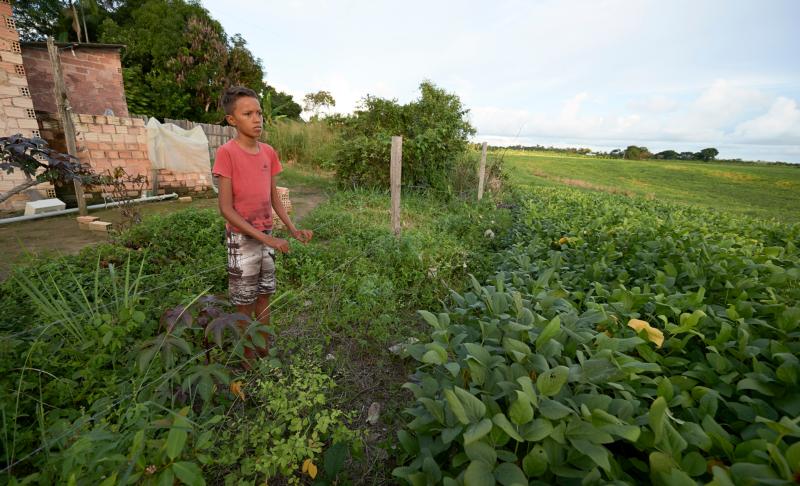 Rostan Gustavo Oliveira do Santos, 14, stands at the fence separating his family’s house from huge fields of soybeans in Santarem, Brazil, March 10, 2019. Pope Francis says the indifference and harm being done to the environment is not only about polluted land, water and air, but includes dangerous attitudes toward other human beings as well as economic practices that hurt people and the land and resources they depend on. (CNS photo/Paul Jeffrey)

VATICAN CITY (CNS) — Integral ecology — a phrase often used when discussing the Synod of Bishops for the Amazon — highlights not just the interconnectedness that exists among God, humanity and creation, but also recognizes how political, economic, cultural, social and religious values and decisions are interrelated and affect the way people live with one another on the planet and use its resources.

Pope Francis says humanity faces not just a number of different crises isolated from one another, but one complex crisis that manifests itself in so many different ways: the indifference and harm being done to the environment is not only about polluted land, water and air, but includes dangerous attitudes toward other human beings as well as economic practices that hurt people and the land and resources they depend on.

That one complex crisis stems from a defective anthropology that does not recognize and respect the full dignity of others, who are all part of one human family. Such a vision, blinded by greed or self-centeredness, leads to many forms of exclusion, exploitation and serious offenses against human rights and the environment.

The solution, Pope Francis said, is an integral ecology that challenges all people to broaden their focus of concern and their daily behavior to include sustainable environmental ecology; protection of all human life; concrete acts of solidarity with the poor; ethical conduct in economic affairs; greater attention to urban planning to facilitate social relationships and give all people some contact with nature; and protection of people’s cultural heritage in an era when media saturation tends to erase distinctions.

In essence, it requires denouncing and converting from a “culture of waste,” in which people and the planet are not treated according to God’s plan.

Integral ecology requires a cultural and spiritual conversion built on a “culture of encounter.” It underlines how relationships should be based on an attitude of caring for one’s common home; one’s brothers and sisters; and one’s relationship with God, the creator.

“A sense of deep communion with the rest of nature cannot be real if our hearts lack tenderness, compassion and concern for our fellow human beings,” Pope Francis wrote in his encyclical, “Laudato Si’, on Care for Our Common Home.”

Integral ecology also requires more than words and promises. It demands practical and concrete steps each and every day by people who recognize they are co-creators and stewards of God’s creation, who preserve and improve both the natural world, human relationships and economic or global policies and practices.

“Everything is connected,” the pope wrote. “Concern for the environment thus needs to be joined to a sincere love for our fellow human beings and an unwavering commitment to resolving the problems of society.”