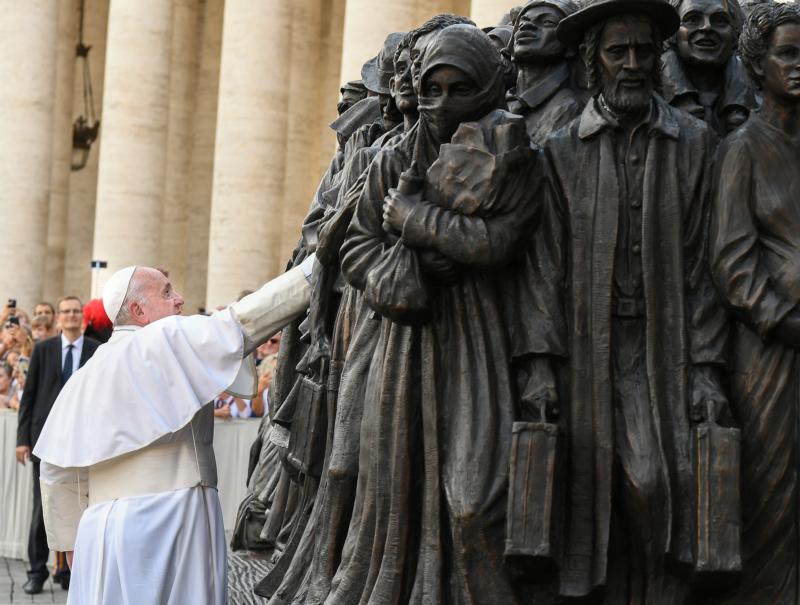 Pope Francis attends the unveiling of a sculpture depicting a group of migrants of various cultures and from different historic times, following a Mass for World Day of Migrants and Refugees, in St. Peter’s Square at the Vatican Sept. 29, 2019. (CNS photo/Vincenzo Pinto, Reuters pool)

VATICAN CITY (CNS) — Christians have a moral obligation to show God’s care for all those who are marginalized, especially migrants and refugees, Pope Francis said.

“This loving care for the less privileged is presented as a characteristic trait of the God of Israel and is likewise required, as a moral duty, of all those who would belong to his people,” the pope said in his homily Sept. 29 during an outdoor Mass for the 105th World Day of Migrants and Refugees.

Some 40,000 men, women and children packed St. Peter’s Square as the sounds of upbeat hymns filled the air. According to the Vatican, the members of the choir singing at the Mass hailed from Romania, Congo, Mexico, Sri Lanka, Indonesia, India, Peru and Italy.

The choir wasn’t the only aspect of the liturgy that celebrated migrants and refugees. According to the Vatican Section for Migrants and Refugees, the incense used at the Mass came from the Bokolmanyo refugee camp in southern Ethiopia, where refugees are restarting the 600-year old tradition of collecting high-quality incense.

Designed and sculpted by Canadian artist Timothy Schmalz, the sculpture depicts a group of migrants and refugees on a boat. Within the group, a pair of angel wings can be seen, which suggests “that within the migrant and refugee is the sacred,” the artist’s website said.

Cardinal-designate Michael Czerny, a fellow Canadian and co-head of the Migrants and Refugees Section, had a very personal connection to the sculpture. His parents, who immigrated to Canada from Czechoslovakia, are depicted among the people on the boat.

“It’s really amazing,” the cardinal told Catholic News Service, adding that when his brother and sister-in-law arrive in Rome to see him become a cardinal Oct. 5, he expects they will pose for many photos in front of the artwork.

Before praying the Angelus prayer at the end of Mass, the pope said he wanted the statue in St. Peter’s Square “to remind everyone of the evangelical challenge to welcome.”

The 20-foot tall sculpture is inspired by Hebrews 13:2, which in the King James translation says, “Be not forgetful to entertain strangers: for thereby some have entertained angels unawares.” The sculpture will be displayed in St. Peter’s Square for an undetermined time while a smaller replica will be permanently displayed in the Rome Basilica of St. Paul Outside the Walls.

In his homily, the pope began by reflecting on the world day’s theme — “It’s not just about migrants” — and emphasized that God calls on Christians to care for all “victims of the throwaway culture.”

“The Lord calls us to practice charity toward them. He calls us to restore their humanity, as well as our own, and to leave no one behind,” he said.

However, he continued, caring for migrants and refugees is also an invitation to reflect on the injustices that occur in the world where those “who pay the price are always the little ones, the poor, the most vulnerable.”

“Wars only affect some regions of the world, yet weapons of war are produced and sold in other regions which are then unwilling to take in the refugees generated by these conflicts,” he said.

Recalling the Sunday Gospel reading in which Jesus tells the parable of the rich man and Lazarus, the pope said that men and women today also can be tempted to turn a blind eye “to our brothers and sisters in difficulty.”

As Christians, he said, “we cannot be indifferent to the tragedy of old and new forms of poverty, to the bleak isolation, contempt and discrimination experienced by those who do not belong to ‘our’ group.”

Pope Francis said the commandment to love God and neighbor is part of “building a more just world” where all people have access to the “goods of the earth” and where “fundamental rights and dignity are guaranteed to all.”

“Loving our neighbor means feeling compassion for the sufferings of our brothers and sisters, drawing close to them, touching their sores and sharing their stories, and thus manifesting concretely God’s tender love for them,” the pope said.

NEXT: Pope declares special Sunday each year dedicated to word of God