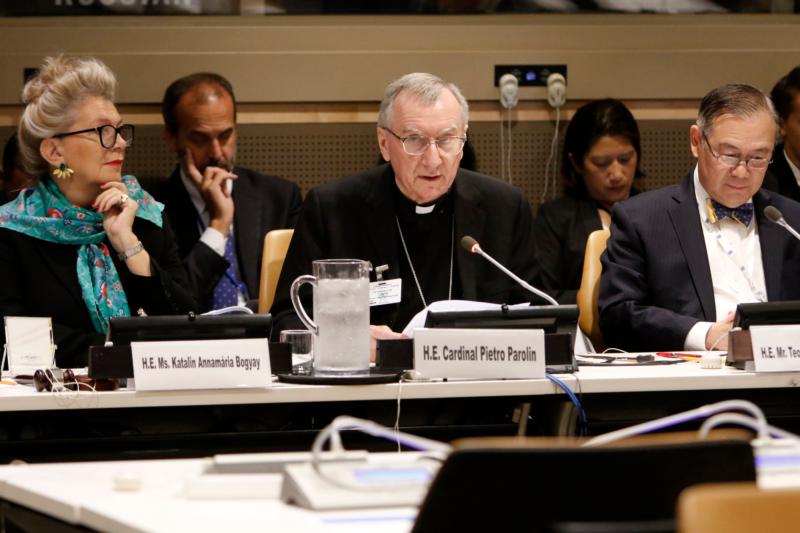 UNITED NATIONS (CNS) — Christians are the most persecuted religious group worldwide, but hypocrisy, political correctness and ignorance prevent the international community from implementing a comprehensive response to pervasive violence against them, said speakers at a U.N. event Sept. 27.

The participants in a high-level panel discussion said 80% of people killed because of their religious beliefs are Christian and the number of Christians hurt or displaced is on the rise.

Teodoro Lopez Locsin Jr., Philippines secretary of foreign affairs, said 4,100 Christians were killed for their beliefs in 50 countries in 2018 and an average of 250 Christians have been killed each month of 2019. He said the deaths are “a votive offering of the West to the oil-rich East.”

“The next Holocaust will be of Christians,” Locsin said, even though many of the world’s greatest powers profess to be Christian or have a Christian heritage.

“In global politics, the fact that Christians are being persecuted is being ignored,” said Peter Szijjarto, Hungary’s minister of foreign affairs and trade. He told CNS that his government is “fighting against the perception that Christianophobia would be the last acceptable form of discrimination.”

Szijjarto said it is regrettable that while Muslim leaders speak enthusiastically about the plight of their mistreated people, Christians seem to be shy about calling attention to the violence against Christians. He attributed this to religion being seen as a local issue and not a global one.

“The international community is absolutely not sensitive” to Christian persecution, and prefers to address issues of “religious minorities,” he said.

“There is no generic religion and we can’t talk about religious freedom in a generic way,” said Ernesto Araujo, Brazil’s minister of foreign affairs.

“Some defend religious freedom as long as there is no religion involved. … The world accepts Christianity as long as it is a set of social values,” he said.

Speakers said the response to violence against Christians must include both political resolve and concrete actions.

Szijjarto said Hungary has been a Christian country for more than 1,000 years and feels a responsibility for the Christian community around the world. Since 2017, it has provided $40 million to help persecuted Christians in the Middle East. He said direct aid has been given to Catholic bishops eager to help Christians stay in their homes and encourage others to return from exile elsewhere.

“The bishops ask us not to invite people to settle in Europe because that contributes to fulfilling the goal of terrorist organizations to eliminate the Christian community,” he said.

Hungarian funds have been used to rebuild 1,000 homes on the Ninevah Plain in Iraq and reconstruct 33 Christian churches in Lebanon, he said. Four schools are now being built in Iraq and Syria, and Hungary is covering the medical expenses of the three largest Christian hospitals in Syria.

Szijjarto said more than 50,000 Christians have either returned home or been able to stay in Iraq, Syria, Jordan, Lebanon and Ethiopia because of the Hungarian aid.

Cardinal Pietro Parolin, Vatican secretary of state, said the return of displaced Christians to the Ninevah Plain “is a sign that evil does not have the last word. It is also a powerful witness of the importance of the Christian presence in the Middle East, where Christianity has its deepest historical roots and has been a fundamental source of peace, stability and pluralism for centuries.”

Ambassador Ghady El Khoury of Lebanon said Christians now comprise 5% of the population of the Middle East, down from almost 20% in the last century.

Cardinal Parolin said more must be done to ensure the return of Christians and ensure the long-term prospects for peace in their homes. “While security is a first and essential priority, for them to recover a dignified way of life requires more,” he said.

He called on the international community to prevent persecution, provide a coherent continuum of development assistance and keep the freedoms of religion and belief at the heart of its efforts.

“Standing up for freedom of religion or belief requires collaborative action. It is not an option, it’s fundamental,” said Lord Tariq Ahmad of Wimbledon, who is minister of state of the United Kingdom.

Ahmad, a Muslim whose children attend Catholic schools, said: “Faith is not something to be hidden away, but celebrated. I passionately believe that the strongest test of my own faith is when I stand up for the beliefs of others.”

The panel discussion, “Rebuilding Lives, Rebuilding Communities: Ensuring a Future for Persecuted Christians” was held in conjunction with the high-level week of the 74th session of the U.N. General Assembly.

PREVIOUS: Australian diocese to pay millions in settlement in one abuse case