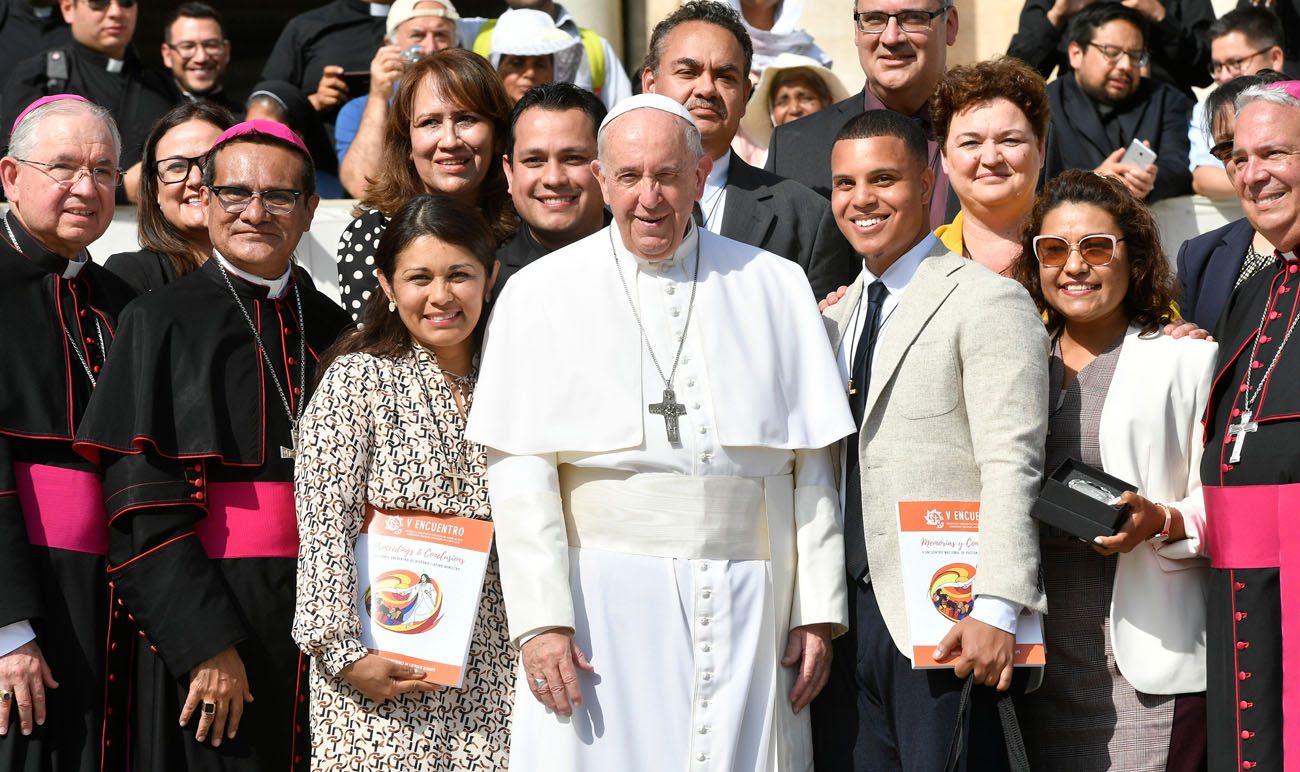 Pope Francis poses for a photo Sept. 18, 2019, with members of a U.S. delegation that traveled to Rome to present the results of the Fifth National Encuentro to the pope and top Vatican officials. Archbishop Jose H. Gomez of Los Angeles, leader of the delegation, is seen at the far left. Next to him is Auxiliary Bishop Arturo Cepeda of Detroit and Paola Martinez of the Diocese of San Bernardino, Calif. To the right of the pope is Luis Pena of the Archdiocese of New York, Junuee Castro of the Diocese of Salt Lake City and Bishop Nelson J. Perez of Cleveland. (CNS photo/Vatican Media)

VATICAN CITY (CNS) — Pope Francis’ call for church of missionary disciples who go to the peripheries to listen and accompany those most in need may have seemed radical and new at the start of his pontificate.

But for U.S. Catholics who have been part of local, regional or national “encuentros” — Spanish for “encounters” — the pope’s desire for a culture of encounter has been right up their alley for decades.

“It’s a process we have been doing for over 40 years in the church” with the first national meeting in 1972, said Patricia Jimenez, communications coordinator for the Fifth National Encuentro.

She said, “It’s nothing new to Hispanic ministry, it’s just a new context and it also takes the work of Pope Francis in Aparecida,” where he played a prominent role in 2007 in drafting a new pastoral vision for the church in Latin American and the Caribbean.

Bishops, delegates and members of the V Encuentro team were in Rome in mid-September to meet the pope and Vatican officials and share with them the results, recommendations and resources that emerged from their national gathering in Texas last year. Several of them spoke with Catholic News Service in Rome Sept. 16.

The visit to the Vatican, they said, has been a way to show how the encuentro process has long been practicing what the pope and the recent synods on the family and on young people have called for, such as more lay and youth leadership, better formation and greater synodality.

Ken Johnson-Mondragon, research coordinator for V Encuentro, said people involved in encuentro “really lived that (synodality) in the whole process, even before the rest of the church in the United States was getting introduced to it conceptually. So that’s a model for others to follow to see what it means to be a listening church and what it means to bring forth the wisdom of the entire community for the good of all.”

Mario and Paola Martinez explained how they and others were unexpectedly prepared for the encuentro process of listening because of their work helping married couples and families build better relationships and communication skills.

“Because they were practicing listening in their own homes, with their families, so many of these couples and families were ready, and encuentro served as a platform for where they could voice concerns and put them on the table, express their hopes, wishes, fears and that desire to be the first evangelizers for their kids,” she said.

The Fifth National Encuentro also inspired their Diocese of San Bernardino to step up its ministry to all families by creating an office of Marriage and Family Life Ministry and making a married couple — the Martinez’s — its co-directors.

Mario said their bishop took a big leap of faith by asking a young married couple to start this new office. “Some older people were not taking us seriously, questioning ‘Who are they? Why do they get to do this?'” he said.

The encuentro process has been a new way for bishops and laypeople to listen and work together, finding ways to be united in their common missionary mandate, they said.

While some bishops may have been hesitant or a little worried about increased lay input, others they said showed “relief, saying, ‘Finally someone to help!'” Mario said.

Many laypeople also found relief and joy in experiencing real dialogue with church leaders at the Fifth National Encuentro, where about 3,500 people, including 124 bishops, participated.

Jimenez, the communications coordinator, said, “I heard it over and over again from delegates who attended, how much it meant to them to feel this accompaniment, to walk with their bishops, to ride the bus together” and see them listening to what people had to say.

Johnson-Mondragon said the growing participation of bishops at local, regional and national encuentros shows “the moral authority of Hispanic and Latino bishops” and how deeply respected they are by their brother bishops.

Bishop Nelson J. Perez of Cleveland, chair of the U.S. bishops’ Committee on Cultural Diversity in the Church, said that after the V Encuentro proceedings are published in October, “our hope then is that the bishops of the country will respond with either a pastoral plan or a pastoral vision that will continue to give direction to the work of the Holy Spirit in the United States.”

Jimenez said the next step is marketing and getting all the resources online and in a variety of formats including video, interviews, graphics and “digestible bits” for formation for everyone.

Luis Pena, a young member of the Archdiocese of New York’s Hispanic Ministry, said leaders have been listening by opening new offices and roles for lay leadership in parishes and dioceses.

And, he said, they have been offering more leadership opportunities for Hispanic and Latinos born in the U.S. or for “the 1.5 generation,” those who lived most of their lives in the United States but were born elsewhere “because we are bridge builders. We know both cultures.”

Bishops “are seeing us as an asset” with the right qualifications and training and the desire “to serve the whole church community not just our people,” he said.

Young people know how to connect and engage with people from many cultures, especially if they’ve grown up in urban areas, he said. If the current culture in the U.S. becomes more fractured and divisive, the church is a positive alternative for young people.

“The church provides an identity that goes beyond national boundaries or culture. Jesus Christ calls everybody,” he said.

“I feel the youth and young adults are naturally drawn to the church, but we’ve just been looking for a way in,” he said. “Just offer us that space, listen to us.”

NEXT: Amman parish helps educate refugees, including in Aramaic, English