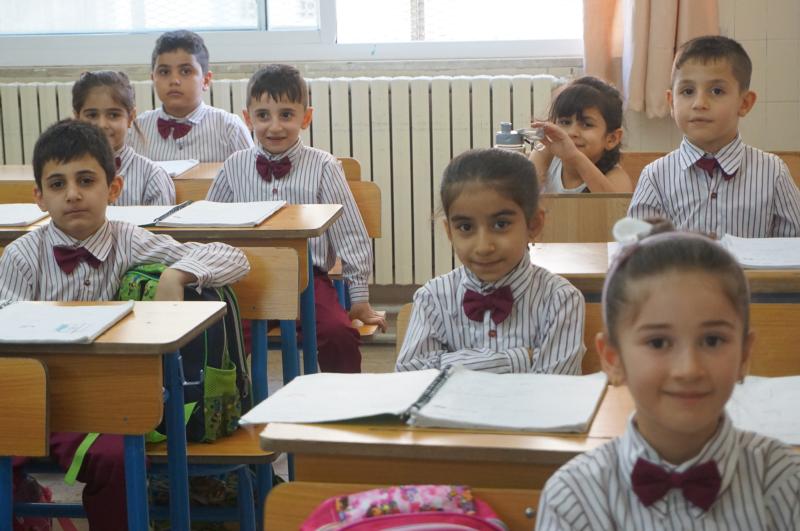 Some of the 200 Iraqi Christian schoolchildren who study English, science, math, Arabic and Aramaic are seen Sept. 9, 2019, at an afternoon school program set up by Father Khalil Jaar at Our Lady Mother of the Church in Amman, Jordan. (CNS photo/Dale Gavlak)

AMMAN, Jordan (CNS) — A shy 12-year-old Iraqi refugee boy waited with his parents and younger brother to register for the new school year. Someone measured him for the distinctive school uniform of maroon trousers and white striped shirt.

“The children ask themselves why they are here, why did they change their school and leave their school friends,” said Father Khalil Jaar, who set up a school at his parish, Our Lady Mother of the Church.

“The first thing I like to do is to support these families and make them feel welcome. I know they are in shock,” the priest told Catholic News Service.

When Father Jaar spoke to the family, he discovered the boys had gone without schooling for the past two years.

“We will do our best to bring (them) up to speed. It’s important that they have Iraqi teachers like we do here, because they will immediately feel comfortable that they are in an Iraqi atmosphere,” the priest said.

As a new school year begins in the Middle East, Jordan — which hosts the world’s second-largest refugee population per capita — is facing the challenges of providing these youngsters with an education.

The U.N. refugee agency reported in August that of the 233,000 refugee children of school age in Jordan, 83,920 — more than one-third — are out of school and are not enrolled in any formal or informal education system, despite improvements made in recent years.

“Access to quality education continues to be a challenge for many, especially the most vulnerable, who are often forced to drop out of school to support their families,” UNHCR spokeswoman Lilly Carlisle said.

The U.N. High Commissioner for Refugees has asked people to help close “the refugee education gap.”

Father Jaar has been at the forefront of doing just that at his parish school, established in September 2014 when some 800 Iraqi Christian families sought refuge in Jordan following their escape from Islamic State militants. The families arrived after the school year had started and were unable to attend Jordanian schools that year.

Father Jaar, who grew up as a Palestinian refugee from Bethlehem, West Bank, has devoted his ministry to aiding Iraqi and Syrian refugees flooding into Jordan from neighboring conflicts for more than a decade.

His church compound hosts a formal school for more than 600 students from Jordan, Syria and Iraq. The school operates under the auspices of Jordan’s Ministry of Education in the mornings.

“The Iraqis in this formal school are only some 80 pupils. But we must pay for them to attend because they are foreigners. We do our best to collect charity from friends to pay for them,” the priest said. He spends about $565 per year per Iraqi student to attend this government-approved school.

The compound hosts an afternoon informal school for 200 Iraqi Christian children four times a week. They are taught math, science, English, Arabic and Aramaic, the language of Christ that they use to pray.

They start their school by praying the Our Father in Aramaic.

“I insist that it is very important to maintain this valuable language for them,” he said.

But equally important is for the children to master English, he said, in the event they are eventually resettled in the West and/or they pursue higher educational studies. So Father Jaar emphasizes the study of English at the afternoon school.

But the priest has experienced his own challenges with running the afternoon school, in which education is provided free of charge. He must raise about $5,650 every month to pay Iraqi teachers, the transportation for the students, snacks, books, stationery and some extra activities.

“We know that our Lord will keep taking care of us. I do my best to keep in contact with my friends and the friends of the school. They are very generous. For the time being, we always had exactly what we need. This makes us depend on God,” Father Jaar said. “In spite all the difficulties of the school, I keep going with this project because I feel responsible to protect the children’s right to education. This is very important.”

Father Jaar has also made free computer science classes available to about 140 Iraqi students, ages 16-18; upon completion, they receive an international computer license.

“Many are unable to enroll in colleges here, so I invite them to be involved. Already many have started to work professionally from home on their computers,” he said.

“I am always available to help people without any discrimination. I don’t care about their nationality or religion,” Father Jaar said. “I am serving human beings here by trying to give them a better life.”