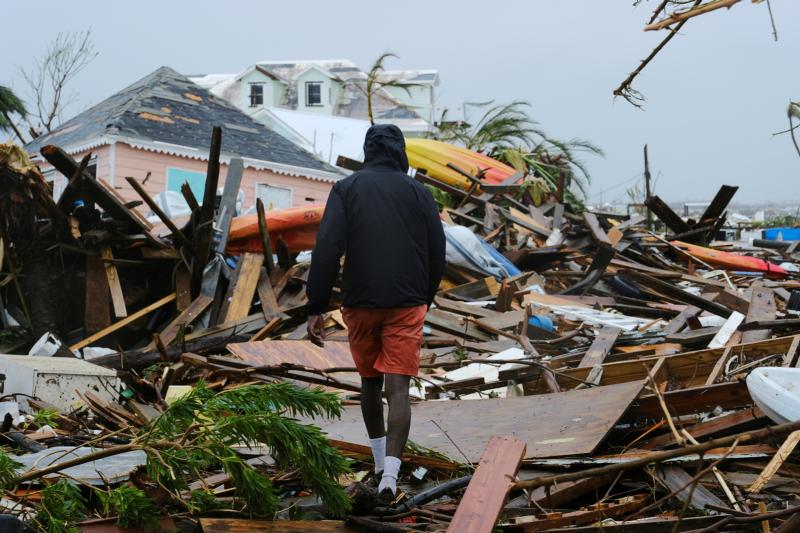 A man walks through rubble Sept. 2, 2019, in the aftermath of Hurricane Dorian in Marsh Harbour, Bahamas. (CNS photo/Dante Carrer, Reuters)

MIAMI (CNS) — The Bahamanian government’s estimated death toll from Hurricane Dorian is likely to rise if and when members of the Haitian immigrant community are accounted for and when search and rescue operations begin in earnest, said an attorney in the Bahamas.

Geoffrey Farquharson, who lives in Nassau where he practices private law, said two settlements of Haitians in Great Abaco Islands’ Marsh Harbor area, locally called “Pigeon Peas” and “The Mud,” were reportedly washed away by Hurricane Dorian. The death count from the storm as of Sept. 5 is 23.

“Those settlements were built illegally on waste ground because nobody had good use for that land and when the hurricane came it was obliterated — many there were completed off-the-grid persons living in the shadows with no passport or papers,” Farquharson said in a Sept. 5 phone interview.

“The authorities are restrained by some protocols, one of which is notification of next of kin, and when these people die it is much more difficult to identify them. They don’t want people to find out from television that family members who lived in those two Haitian immigration settlements may have died,” said Farquharson, a member of St. Francis Xavier Parish in Nassau.

He said church and charitable agencies could play a vital role during the recovery by looking after undocumented Haitians and other persons living in the Bahamas who are now likely homeless and fearful of their situation.

“What I am particularly worried about is that the attitude here toward them has been hardening in recent years and we will have to do something in our church to meet the persons in that community and invite them to come get aid anonymously and with security,” he said.

Farquharson, who rode out the storm at his home in Nassau, has spotty cellphone and electrical power — two conditions that existed throughout the Bahamas even before Hurricane Dorian. He has also been in touch with clients and colleagues throughout the area and believes that the government’s estimate of 75,000 persons needing immediate support of food, water and shelter is a highly conservative figure.

“These are destitute hurricane refugees with no stoves, no homes, groceries and no means of providing for themselves,” Farquharson said. “The most critical need at the moment is water purification pellets and purification machinery. After that, the most urgent need is for food on an ongoing basis and temporary shelter for about a year.

The National Hurricane Center describes Dorian as one of the strongest storms in the Atlantic’s history and estimates that a high percentage of framed homes will be destroyed, with total roof failure and wall collapse. Fallen trees and power poles will isolate residential areas, and power outages will last for weeks to possibly months, making most of the area uninhabitable for that time period.

The storm’s sustained wind speeds maxed out at 185 mph on Sept. 1 when the storm first made landfall.

Meanwhile, Dorian has been pushing its way up the Southeastern U.S. coast, menacing Georgia, North Carolina and South Carolina.

“The brightest thing that can happen for us would be for the governor of Florida to redirect the hurricane resources from Florida to the Bahamas,” Farquharson said.

On the spiritual side, he said that since observing Hurricane Katrina’s impact on the city of New Orleans, he has been dedicated to praying to Our Lady of Prompt Succor for his own storm protection and he especially did this throughout Hurricane Dorian.

“I really believe in prayer, and I pray to her in times of devastation for urgent help,” Farquharson said. “It is a prayer that I have been praying since this hurricane came and I ask people to pray that prayer for us.”

NEXT: Pope leaves Mozambique urging reconciliation, care for one another