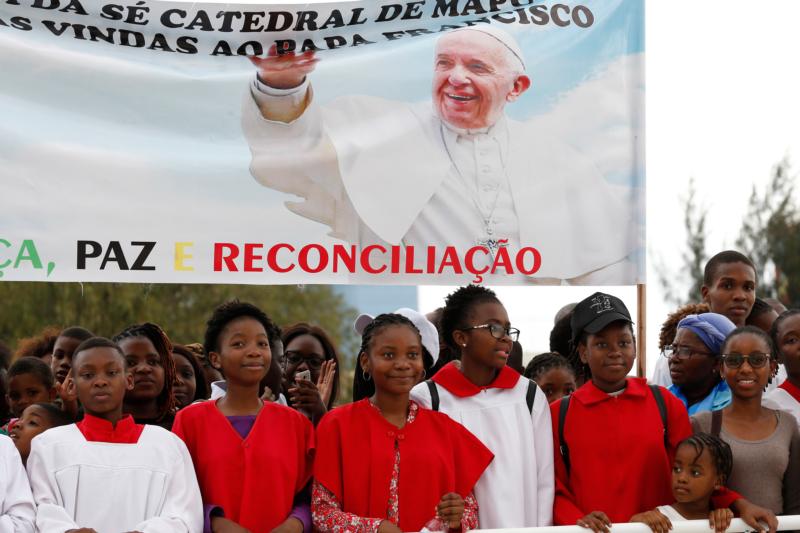 Young people wait for Pope Francis’ arrival for a meeting with bishops, priests, religious, seminarians and catechists at the Cathedral of Our Lady of the Immaculate Conception in Maputo, Mozambique, Sept. 5, 2019. (CNS photo/Paul Haring)

MAPUTO, Mozambique (CNS) — The Catholic Church’s ministers — including catechists and bishops — are called to be realistic, to treasure the Christian identity and to never be afraid to move forward and try new ways to bring the Gospel to life, Pope Francis said.

At Maputo’s art deco Cathedral of the Immaculate Conception Sept. 5, the pope told Mozambique’s church workers to follow the example of Mary, who welcomed the news of God’s plan for her without too many questions, then set off to visit her cousin, Elizabeth.

Bells pealed as the pope arrived at the cathedral. Once inside, and after he had greeted elderly missionaries and prayed before the Blessed Sacrament, Pope Francis was welcomed with a lively dance by more than a dozen sisters, all wearing veils.

A bishop, a priest, a sister and a lay catechist each addressed the pope, highlighting the challenges in their work, but also all insisting that none of them have lost their hope, their faith in the greatness of God and their call to share the Gospel more fully.

Bishop Hilario da Cruz Massinga of Quelimane told the pope that the country is blessed with many vocations to the priesthood and religious life, but sometimes “there is a tendency toward worldliness or a certain disorder.”

A sister, not identified by the Vatican, asked how religious could live their vows more radically to counter “an increasingly materialistic and alienating society.”

And a catechist, a young man, told Pope Francis that a big challenge is dealing with mixed marriages, especially between a Catholic and a Muslim because, he said, anyone who marries a Muslim is expected to convert.

Pope Francis acknowledged the questions, but did not answer them directly. Instead, he emphasized the need for church workers to be faithful to their vocations and to return again and again to remembering that moment when they first experienced God’s loving call.

Firm in faith and in the knowledge that God continually calls Christians to move forward, to journey further and draw closer to Christ and to their neighbors in need, Pope Francis urged courage and self-giving.

Christians face a “constant struggle” in their relationship with God to avoid the temptation to weigh whether God, or the church, has adequately rewarded all their hard work and sacrifices, he said. Instead, they must be like Mary, surrendering themselves and trusting the Lord.

In a nation still dealing with deep divisions 27 years after a long civil war ended, Pope Francis put the question about mixed marriages in the more general context of learning to accept differences and to dialogue with all people.

Remembering Mary’s visit to Elizabeth, Pope Francis said the Catholic Church in Mozambique “is invited to be the Church of the Visitation: It cannot be part of the problem of rivalry, disrespect and division that pits some against others,” but instead is a place of encounter, where respect and dialogue occur.

Echoing the “avanti” or “keep going” that has been a constant in his pontificate, the pope told the Mozambican church workers that, after praying for the guidance of the Holy Spirit, the church must “find the road to take in the face of new problems, taking care not to remain paralyzed by the mindset of opposition, division and condemnation.”