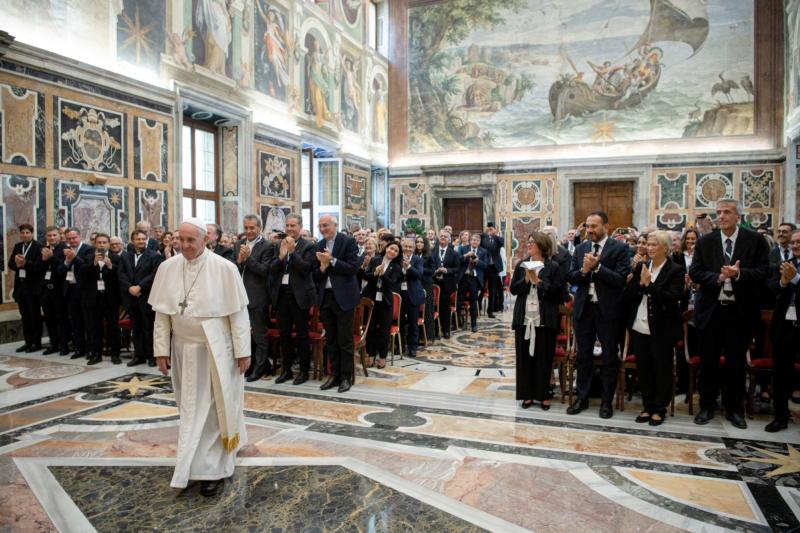 Pope Francis arrives for a meeting with members of the Italian Catholic Union of the Press at the Vatican’s apostolic palace Sept. 23, 2019. Journalists need to be able to distinguish good from evil and see how their reporting can actually shape the world, not just describe what has happened, Pope Francis said. Reporters can also help “unmask words that are false and destructive,” and make sure their sources are credible, he added. (CNS photo/Vatican Media)

VATICAN CITY (CNS) — Catholic journalists need to be able to distinguish good from evil and recognize how their words can shape the world, not just describe what has happened, Pope Francis said.

Reporters also can help “unmask words that are false and destructive,” but they must make sure their sources are credible while offering the correct context, interpretation and importance of events, he said during an audience with members of the Italian Catholic press Sept. 23.

The pope made similar appeals earlier in the day when speaking with members of the Vatican’s own media department, the Dicastery for Communication, which was holding its plenary assembly.

The Vatican department’s work in communication, he told them, must never be promotional or driven by the desire to have a bigger audience, nor must employees be tempted into feeling defeated and defensive against the wider culture.

During his audience with members of the Italian Catholic Union of the Press, which was celebrating its 60th anniversary, the pope urged the journalists to be “the voice of the conscience of a journalism capable of distinguishing good from evil, humane choices from inhumane ones,” because the two sides are hard to differentiate today as they are all mixed up in “a hodgepodge.”

Journalists are called to reconstruct the facts, “work toward social cohesion (and) to tell the truth at all costs” in a way that is respectful and never arrogant, he said.

“Communication needs real words in the midst of so many empty words,” the pope said.

It is a great responsibility, he said, because “your words talk about the world and shape it, your stories can create the space for freedom or for slavery, for responsibility or addiction to power.”

He said he knows reporters often would like to be able to do this, “but they have an editor behind them who says, ‘No, this can’t be published, this yes, that no.'”

What happens is truth gets run through a “distillery” of the publisher’s financial interests or advantages and what comes out is no longer true, he said.

Just as they can work to build a world that is more just and caring, he said journalists also can help strip away what is false and toxic.

In the internet age, “the task of a journalist is to identify credible sources, put them in context, interpret them” and give things their due importance. For example, he asked, why is it when a homeless person freezes to death on the street there is no media attention, but every news outlet will cover the stock exchange going down two points. “Something is not right here,” he said.

“Don’t be afraid to turn the news lineup upside down, to give voice to the voiceless, to tell ‘good news’ stories” that foster a friendlier society. “Don’t tell fairytales. No. Just real good news stories,” he said.

When the pope had met earlier with members of the Dicastery for Communication, dicastery consultants and the employees who work in the Vatican’s various media outlets — television, internet, radio and newspaper — he set aside his prepared remarks, saying it would defeat the purpose of communication if reading a long speech put them to sleep.

Asking instead that they read and reflect on the written remarks later, the pope said he wanted to encourage them to be true communicators motivated by love.

Communications must be about witness, he said, and witnessing one’s faith has an element of martyrdom in that the Christian vocation is being a minority in the world — that tiny bit of salt or leaven that can transform everything.

Do not give in to the temptation of giving up or closing oneself off from the world, choosing to believe the few are somehow an elite or an “elect” group of authentic Christians, he added.

“Resigning oneself to cultural defeat comes from the evil spirit, it does not come from God,” he said. “The griping of resignation is not the Christian spirit.”

Martyrs and those who sacrifice everything to live their faith and be true to God “give life to the church, not our artists, our great preachers, our custodians of the ‘true and complete doctrine.’ No. martyrs, a church of martyrs,” he said.

NEXT: At age 80, Angola’s cardinal-designate still works among the poor