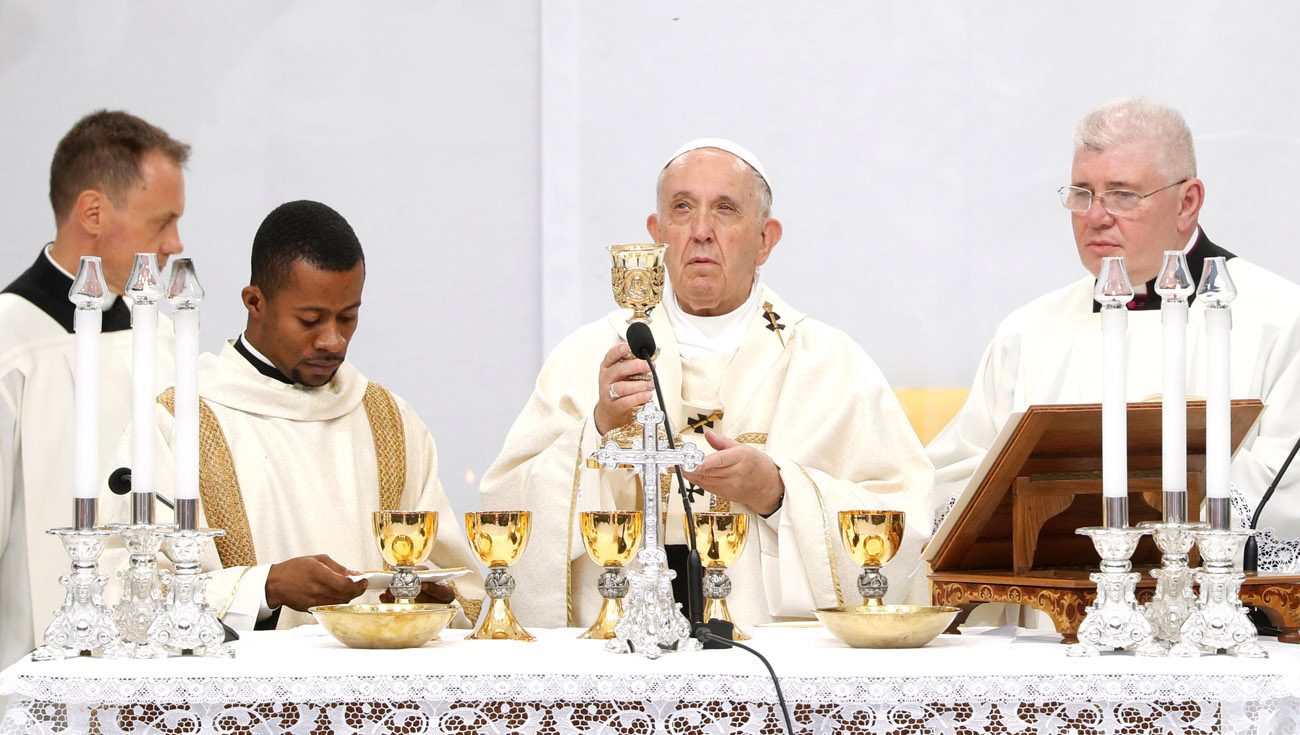 Pope Francis celebrates an outdoor evening Mass in Albano's central Piazza Pia, near the Italian town's cathedral, Sept. 21, 2019. The pope used the anniversary of the dedication of the cathedral to talk about what Catholic churches should be and how parishioners should act toward their neighbors who never attend church. (CNS photo/Yara Nardi, Reuters)

ALBANO, Italy (CNS) — Christians are not licensed “inspectors of other people’s lives,” but rather disciples who reach out to others, assuring them of God’s love and welcoming them into the community, Pope Francis said.

Celebrating an outdoor evening Mass Sept. 21 in Albano, about 20 miles south of Rome, Pope Francis used the anniversary of the dedication of the city’s cathedral to talk about what Catholic churches should be and how parishioners should act toward their neighbors who never come to church.

“The Lord remembers us,” the pope said. “He does not forget us, he does not lose sight of us despite the obstacles that can keep us far from him,” as the Gospel story of Zacchaeus demonstrates. Although the tax collector had a “small stature, physically and morally,” Jesus noticed him and decided to go to his house even though everyone in Jericho knew he was a sinner.

Reading the Zacchaeus story on the anniversary of the cathedral dedication, Pope Francis said, is a reminder that “every church — the church with a small ‘c’ — exists to keep alive in people’s hearts a reminder that God loves them.”

“It exists to say to each person, even those furthest away: ‘You are loved and called by name by Jesus. God does not forget you. You are in his heart.'”

The followers of Jesus, the pope said, must follow his example with Zacchaeus and “go to those who are most forgotten, those hiding behind the branches of shame, fear and solitude, and say to them, ‘God remembers you.'”

Knowing that at Mass in the square there probably were people who didn’t go to church regularly, Pope Francis spoke directly to them: “Dear brother, dear sister, if like Zacchaeus you are looking for meaning in your life but not finding it, if you are throwing it away with ‘surrogates for love’ like wealth, career, pleasure or some form of dependence, let yourself be seen by Jesus.

“Only with Jesus will you discover that you always have been loved,” the pope continued. “You will feel touched inside by the invincible tenderness of God who moves and inspires your heart.”

Although he did not speak directly about the day’s feast of St. Matthew and his own overwhelming experience of God’s mercy during confession on the Sept. 21 feast day in 1953, it obviously was on his mind. His episcopal motto, “Miserando atque eligendo” (“because he saw him through the eyes of mercy and chose him”) comes from a homily on the Gospel call of St. Matthew by eighth-century St. Bede the Venerable.

In his homily in Albano, Pope Francis told the people that every conversion begins with the outpouring of God’s love and mercy, and if that mercy and love are not the first inspiration for everything a parish does then “we risk making the faith mundane, complicating it, filling it with non-essentials.”

“You don’t need to be complicated Christians who elaborate a thousand theories and get lost searching for answers online,” he said. Those who have experienced God’s mercy and are active in parish life must do their best to make sure their churches are places where others can feel God’s mercy and love.

“Unfortunately, it can happen that our communities become extraneous and unattractive to many people,” he said. “Sometimes we give in to the temptation of creating closed groups, intimate spaces among the elect. We think we’re the elect, the elite.”

But Jesus wants everyone to know his saving love and that means trying to help those who feel unworthy or unwelcomed or who have stayed away “because a priest treated them badly,” the pope said. Jesus wants his church to be “a hospitable tent” where every person can encounter him.