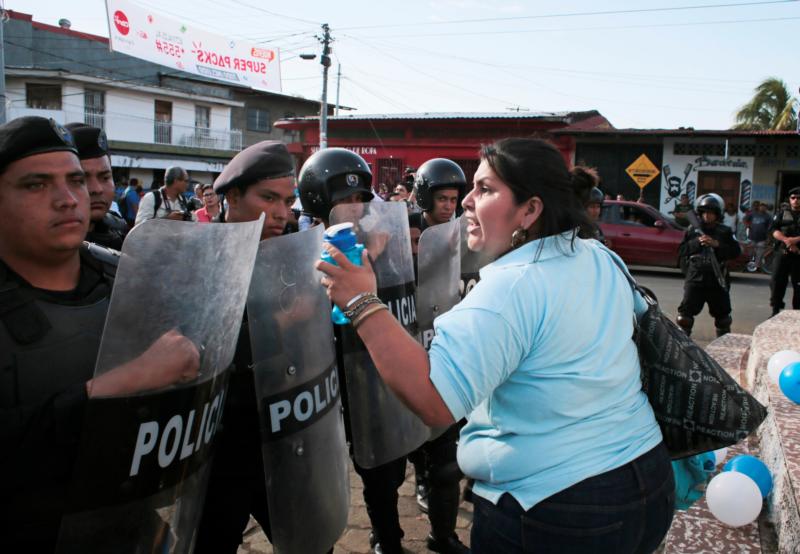 A woman shouts slogans in front of riot police officers during a prayer service for the release of political prisoners Aug. 28, 2019, in Masaya, Nicaragua. The Society of Jesus has urged Latin American countries, working “through international diplomacy,” to “take all the necessary measures to rescue democracy in Nicaragua and hold the current regime responsible for the crimes it has committed.” (CNS photo/Oswaldo Rivas, Reuters)

SANTIAGO, Chile (CNS) — The Society of Jesus has urged Latin American countries — working “through international diplomacy” — to “take all the necessary measures to rescue democracy in Nicaragua and hold the current regime responsible for the crimes it has committed.”

In a lengthy statement, “Crimes that demand justice: an urgent call to the international community,” released Sept. 19, the Conference of Jesuit Provincials of Latin America and the Caribbean called for justice and an end to the violence in Nicaragua where, for the past 18 months, the government has targeted opponents of President Daniel Ortega and his wife, Vice President Rosario Murillo.

“We will not tire in denouncing the arbitrary actions of the Ortega-Murillo regime,” said the statement signed by Father Roberto Jaramillo Bernal, conference president, and Father Rolando Alvarado, Jesuit provincial for Central America.

“We want to continue being attentive of the voices of those who are suffering the unmerciful tyranny of power that tries to subject the dreams of freedom and democracy through terror, repression, torture and killings.”

Nicaraguans took to the streets, starting in April 2018, against a proposed reform to the country’s social security institute. Their demands expanded to include the ouster of Ortega and his Sandinista party.

Ortega deployed police and paramilitaries to crush the protests and baselessly accused opponents of plotting a coup. The Inter-American Human Rights Commission put the death toll at 328, while the U.N. High Commissioner for Refugees reports 88,000 Nicaraguans have fled the country, mostly to neighboring Costa Rica.

At least 400 physicians have been fired for “speaking out against the regime,” the Jesuits’ report said, while at least 100 journalists have been forced to flee Nicaragua due to persecution of the press.

The area outside the Jesuit-run University of Central America has previously been the scene of demonstrations and police repression of protesting students, something not mentioned in the statement.

“Protests have been dramatically reduced thanks to the regime of terror and the fear installed by the disproportionate deployment of police at the announcement of any mobilization,” the statement said.

“On average, four people are captured daily for participating in small protests,” along with people in the proximity of protests, the statement continued. “The raiding of homes is a recurring practice on the part of police forces or by paramilitaries. Victims are habitually beaten, threatened and are robbed of their belongings. … Social control is strict, and espionage has institutionalized it.”

Earlier in 2019, political prisoners were released, providing hope of a solution for the country’s political crisis. The Jesuits, however, said the former political prisoners still have open case files and called their release “a convenient measure to pretend they (government officials) were open to dialogue and face-to-face negotiations that occurred with the opposition from February to July 2019.”

The Jesuits’ statement followed a Sept. 15 letter from the Nicaraguan bishops’ conference, which called for the country to seek unity and overcome a “crisis of trust.”

PREVIOUS: Culture of care is essential for the common good, pope tells doctors