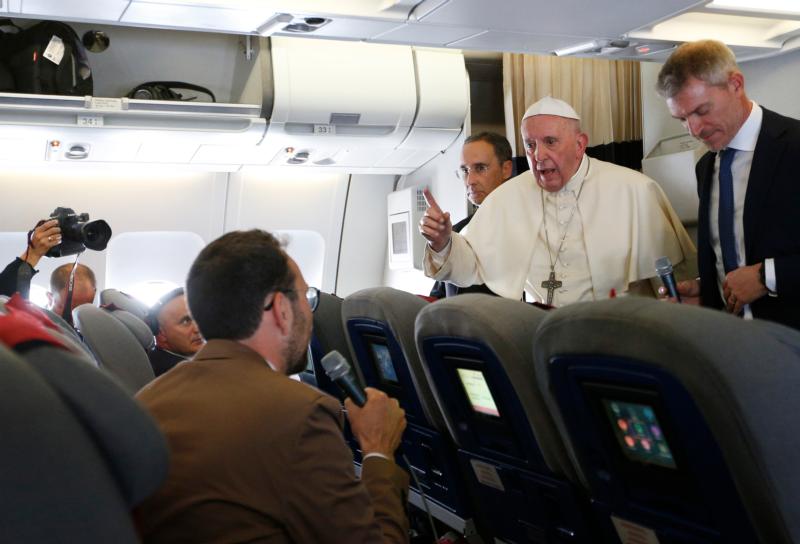 Pope Francis listens to a question from Jason Horowitz of The New York Times aboard his flight from Antananarivo, Madagascar, to Rome Sept. 10, 2019. (CNS photo/Paul Haring)

ABOARD THE PAPAL FLIGHT FROM MADAGASCAR (CNS) — No one really knows what the future of the news media will be, but it will have no future if reporters and the public cannot distinguish between facts and fiction, Pope Francis said.

Honoring a request from the Spanish news agency EFE to contribute to its collection of views about the future of the media, Pope Francis responded publicly during his flight Sept. 10 from Madagascar to Rome.

When he was a boy, he said, his family did not have a television; instead they listened to the radio and read newspapers. Sometimes, depending on the government in power, they were “clandestine newspapers,” distributed under cover of night.

“Compared to today’s news industry, it all seems very precarious,” he said. But today’s media may look just as precarious when people in the future look back.

“What remains, however,” he said, is the ability and responsibility of the news media “to inform the audience of an event and to distinguish these facts from narrative,” fiction or opinion.

“It is extremely easy to move from the facts to narrative,” he said, “and this damages the news industry. It’s important to stick to the facts.”

Pope Francis said the Catholic Church and its media are not exempt from that danger. “Within the church, when there is a fact, it goes around the corner, and then it gets adorned, it gets embellished. Everyone adds their own contribution, and not even in bad faith.”

But “the mission of the journalist is to always stick to the facts: ‘The facts are these. My interpretation is this. I was told this.’ It distinguishes you from the storyteller.”

And if a news report includes an account of something an individual or group believes is true, but the reporter has not witnessed, the reporter must inform readers or listeners, he said. “This is what being objective is all about, and this is one of the values that the news industry needs to retain.”

“The news industry cannot, for example, be used as an instrument of war, as this is inhumane, it destroys,” the pope said. “Think back to the propaganda of the dictatorships of the past century. There were dictatorships that communicated well, that tried to sell you the moon. … They were well structured, they communicated well. They encouraged war, destruction; they were not humane.”