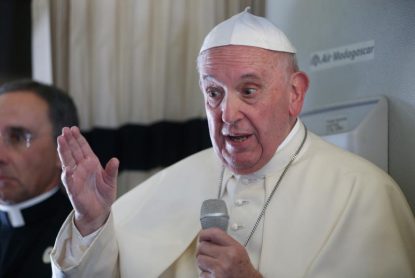 ABOARD THE PAPAL FLIGHT FROM MADAGASCAR (CNS) — Pope Francis told reporters he hoped and prayed the Catholic Church would not experience a new schism, but human freedom means people always have had and will have the “schism option.”

“I pray that there not be schism, but I am not afraid,” Pope Francis told reporters flying from Africa back to Rome with him Sept. 10.

Schisms have occurred throughout church history, he said, and one thing they all have in common is having such a focus on an ideology that they begin reading church doctrine through the lens of that fixation.

A schism is triggered when “an ideology, perhaps a correct one, infiltrates doctrine and it becomes ‘doctrine’ in quotation marks, at least for a time,” he said.

As an example of ideology, the pope cited those who say, “The pope is too communist” because of his criticism of unbridled capitalism and its negative impact on the poor. “The social things I say are the same things John Paul II said. The very same. I copy him.”

When ideology takes the place of doctrine, he said, there is the danger of a split in the Christian community.

Pope Francis said small groups of Catholics in the United States are not the only people who criticize him — there are even people in the Roman Curia who do — but he tries to learn from the criticism and to find a way to dialogue with critics who are open.

“Criticism always helps,” Pope Francis said. “When one is criticized, the first thing to do is to reflect, “Is this true, not true, to what extent” is it valid?

“Sometimes you get angry,” he said, but “there are always advantages” to be drawn from listening to critics.

During the inflight news conference, which was briefly interrupted because of turbulence, Pope Francis responded mainly to questions about issues that arose during his visit Sept. 4-10 to Mozambique, Madagascar and Mauritius. The topics included the contested U.S. military base, Diego Garcia, in the Chagos archipelago, and his teaching on ecology.

But the pope also was asked to respond more fully to an informal comment he made on the flight to Mozambique Sept. 4, when he said that it is “an honor when Americans attack me.”

French writer Nicolas Seneze had given the pope a copy of his book, “Comment l’Amerique veut changer de pape,” which can be translated as “how America wanted to change popes.” Seneze’s thesis is that a small group of wealthy U.S. Catholics is engaged in a concerted effort to cast doubt on this pontificate.

“The criticism is not coming just from America, but a bit from everywhere, including the Curia, but at least those who are doing it have the courage” to be public about it, the pope said on the flight back to Rome. What isn’t acceptable is when one “smiles so much he shows you his teeth,” and then lists criticisms “behind your back.”

Criticism is healthy when it is open and when the person doing the critique is willing to listen to the other’s reasoning and to dialogue. “This is real criticism,” he said.

“Throwing a rock and then hiding your hand” is something else, the pope said. “This isn’t useful. It only helps closed little groups who don’t want to hear the response to their criticism.”

On the other hand, he said, “loyal criticism” can include saying, “I don’t like this about the pope” as long at the critic gives an explanation and is willing to hear a response.

Not waiting for or wanting a response “is to not love the church,” he said. “It is to follow a set idea (like) changing the pope or changing his style or creating a schism.”

He spoke about another ideology he calls “rigorist,” which he told reporters is “the ideology of an antiseptic morality” that takes no account of the real lives of the faithful and the obligation of pastors to guide them away from sin and toward living the Gospel.

“There are many schools of rigidity within the Catholic Church today which are not in schism, but are pseudo-schismatic Christian paths, which will not end well,” he said.

On the question of the Diego Garcia military base, which is on territory in the Indian Ocean claimed by Mauritius and the United Kingdom, Pope Francis said the nations that belong to and support the United Nations and international courts have an obligation to accept their decisions. The U.N. General Assembly recently adopted a resolution calling on Britain, which leases the base to the U.S. military, to cede the territory to Mauritius.

“I don’t know if this is true in this case,” the pope said, but a common phenomenon has been that when a people wins its independence and colonizers are forced to leave, “there’s always the temptation of taking something in their pockets,” like recognizing a new government, but trying to maintain control over the extraction of natural resources.

“In the collective consciousness, there has been the idea that Africa is there to be exploited,” the pope said. “We, humanity, must revolt against this.”

Pollution, deforestation and desertification are all signs of that kind of attitude, he said.

Recognizing that the earth and its biodiversity are essential for life, Pope Francis said everyone must take action, beginning with small steps. For example, he added, the Vatican recently banned the sale of single-use plastic, such as water bottles, on its territory.