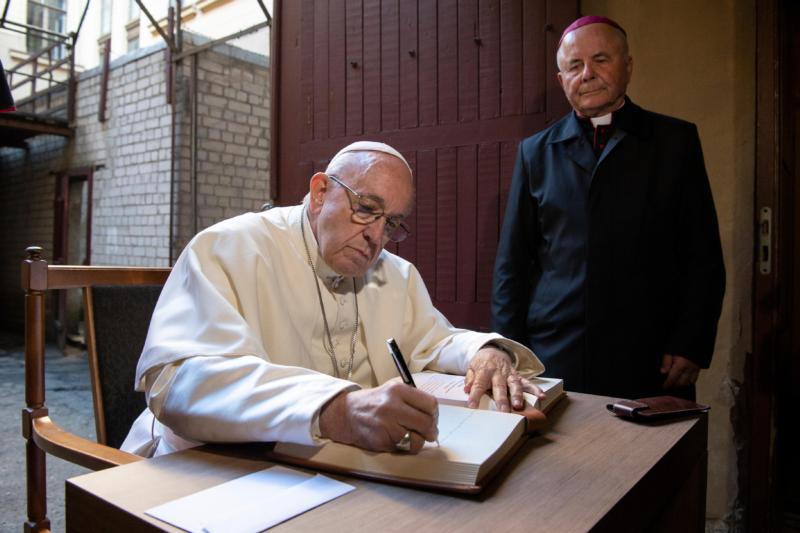 Lithuanian Cardinal-designate Sigitas Tamkevicius watches as Pope Francis leaves a message at the Museum of Occupations and Freedom Fights in Vilnius, Lithuania, Sept. 23, 2018. The museum is in the former KGB headquarters and features photographs of the cardinal-designate as a prisoner of the communist regime. (CNS photo/Vatican Media)

WARSAW, Poland (CNS) — Lithuania’s new cardinal, a veteran of Soviet prisons and labor camps, counts on not being assigned “specific duties” following his elevation so he can continue serving his local church.

Cardinal-designate Sigitas Tamkevicius told Lithuania’s Kauno Diena daily that Pope Francis could “expect me to be a committed witness to the faith, which is what’s most important to the present-day church. If you want to have real influence, you must set an example through your life.”

“A cardinal’s ministry consists of faithfulness to church and Gospel, but this is also the ministry of every normal Catholic,” he said.

The retired Kaunas archbishop will receive the red hat from Pope Francis Oct. 5 at the Vatican. He was one of 13 new cardinals announced Sept. 1. At age 80, he will be ineligible to vote in a conclave for a new pope.

Msgr. Adolfas Grusas, Kaunas archdiocese chancellor, told Catholic News Service Sept. 19 that the retired archbishop’s appointment was a “crowning moment for efforts made during the period of enforced atheism” and an “act of recognition” by Pope Francis, who visited former KGB police cells with Cardinal-designate Tamkevicius during a September 2018 visit to Lithuania.

“Despite his new status, I’m sure he’ll hope to continue as before, willingly participating in parish events around our country,” said Msgr. Grusas. “He stands today as a living witness to our people’s sufferings and how these were carried into the present. No one has ever questioned his service and dedication in this area.”

Msgr. Grusas told CNS the cardinal-designate was “a deeply understanding and reassuring person, who never rushes decisions and is always cheerfully confident things will work out.”

“But he’s also immensely strong internally, modestly avoiding the limelight while helping others achieve the confidence he feels.”

Msgr. Grusas also said the cardinal-designate was a committed cyclist who had covered 2,000 miles during the summer, adding that physical strength had been key to his survival in prisons and labor camps.

Born Nov. 7, 1938, into a farming family in Krikstonys, Lithuania, SigitasTamkevicius began priesthood training in 1955 and was ordained in 1962 after a compulsory period in the Soviet army.

In 1968, while working in parishes, he was secretly admitted to the outlawed Jesuit order but had his state priest’s license revoked a year later for signing a petition against Soviet restrictions on the Kaunas seminary.

In 1972, after working in a metal factory and digging land reclamation ditches, he began editing an underground Chronicle of the Catholic Church in Lithuania, which became the Soviet Union’s longest-running self-issued journal.

In November 1978, a month after the election of the Polish Pope John Paul II, he co-founded a Catholic Committee for the Defense of Believers’ Rights, which issued 20 documents and petitions within a year, gaining support from more than 500 clergy.

Arrested in 1983, Tamkevicius spent six months in the KGB prison in Vilnius, before being sentenced to six years’ hard labor. In 1988, he was exiled to Siberia to complete the sentence.

Despite repeated warnings by Lithuania’s state religious affairs commission, fellow clergy refused to testify against him, and Cardinal-designateTamkevicius was praised by the underground Chronicle as a national hero.

In a Catholic News Service interview after his release, he laughed off past raids and interrogations by the secret police, who codenamed him “Tomova,” but admitted there had been “agonizing moments,” such as when, leaving Moscow with two bags stuffed with illegal leaflets, he had been offered the only available seat on the bus home — next to the local KGB chief.

He added that he had recognized the need to speak out and avoid compromising the Catholic faith through collaboration, despite fears he might never be freed.

Where the resistance was strongest, the priest added, the most vivid religious revival occurred.

“We all understood the authorities wanted to kill us morally, to stop others following our example,” then-Father Tamkevicius told CNS.

“But they always faced the same problem: They could use every physical measure against us, but they couldn’t convince people we were wrong. If we’d allowed them to, we would have destroyed the church — and today, far from celebrating, we’d all be hiding in dark corners.”

Appointed spiritual director and rector of the Kaunas seminary as Soviet rule faltered in Lithuania, Cardinal-designate Tamkevicius was named auxiliary bishop in 1991, as the country’s independence was recognized. In 1996, he replaced Cardinal Vincentas Sladkevicius, another former exile, as archbishop of Kaunas.

He served several terms as bishops’ conference president, steering the Lithuanian church through the country’s accession to NATO and the European Union, as well as controversies with its governments over abortion, divorce, religious education and mass emigration. He retired as archbishop in 2015.

NEXT: Amazon inhabitants hope synod will address lack of priests