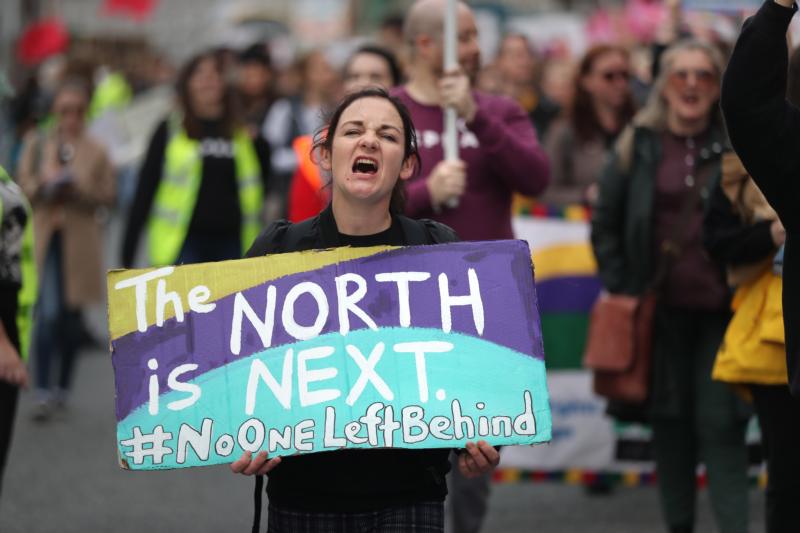 A woman displays a sign during a Sept. 28, 2019, rally in Dublin with other demonstrators who support abortion. Northern Ireland’s Catholic and Protestant leaders said the British Parliament decided to impose abortion in Northern Ireland without consulting the people. (CNS photo/Niall Carson, Reuters)

MANCHESTER, England (CNS) — Church leaders in Northern Ireland encouraged their political parties to quickly re-establish their self-governing institutions to stop the British government from imposing a liberal abortion law on the province.

Leaders of the Catholic, Anglican, Methodist, Presbyterian and other Protestant churches said in a Sept. 30 statement that they also were organizing an Oct. 12-13 weekend of prayer amid an effort to halt the threat of abortion.

The British Parliament in London voted in July to make abortion on demand legal in the province within 28 weeks of pregnancy unless legislative powers that were devolved — passed down from London to the Northern Ireland assembly in Stormont — were restored by Oct. 21. Power-sharing at Stormont, which originated from the Good Friday Agreement of 1998, collapsed in 2017, and there have been few signs that it will be restored.

Speaking of the abortion law, church leaders said: “There is no evidence that these changes reflect the will of the people affected by them, as they were not consulted. They go far beyond the ‘hard cases’ some have been talking about.”

They said they were encouraging all of their members, congregations and parishes to join the prayer weekend “with many others throughout Northern Ireland, and further afield, praying both for the protection of the unborn in our society and also for women facing difficult and challenging pregnancies, along with their families.”

“We recognize that time is short, but that if our devolved institutions are re–established before Oct. 21, this Westminster–based legislation will not be imposed on Northern Ireland,” they continued.

“Our Northern Ireland political parties have it in their own hands to do something about this. They all need to take risks and make the compromises necessary to find an accommodation that will restore the devolved institutions,” they said.

The leaders said they would ask Julian Smith, the British Secretary of State for Northern Ireland, to recall the assembly before Oct. 21 “to provide an opportunity for the parties to take the necessary steps both to prevent these laws coming onto effect and to find a better Northern Ireland solution for these challenging issues.”

They also said their hoped to meet with Smith to express their concerns.

The statement was signed by Catholic Archbishop Eamon Martin of Armagh, Northern Ireland, the primate of All Ireland; Church of Ireland (Anglican) Archbishop Richard Clarke of Armagh; William Henry, moderator of the General Assembly of the Presbyterian Church in Ireland; the Rev. Sam McGuffin, president of the Methodist Church in Ireland, and the Rev. Brian Anderson, president of the Irish Council of Churches.

Politicians in Westminster amended the Northern Ireland (Executive Formation) Bill to introduce abortion and same-sex marriage in the province unless self-government was restored within three months.

The Stormont assembly also rejected abortion when it had the opportunity to vote for its introduction in 2016.

Northern Ireland is the only part of the U.K. — and one of the few places within Europe — where doctors can be prosecuted for providing abortions.

This summer, Auxiliary Bishop John Sherrington of Westminster, the lead bishop on pro-life issues of the Bishops’ Conference of England and Wales, described the legislation as “an imposition enacted by a parliament which is overwhelmingly not from Northern Ireland.”

PREVIOUS: Court grants bail to sick Indian nun; still no charges against her