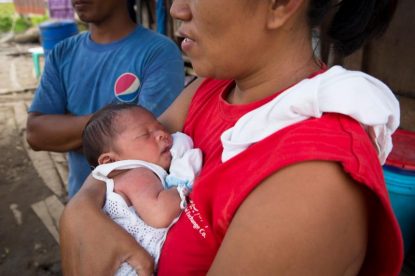 A family in Barangay Cabarasan Guti, near Tanauan, Philippines, is seen in this 2014 file photo. As the Philippines Senate hears proposals to legalize divorce, church leaders there say divorce is anti-marriage and anti-family. (CNS photo/Tyler Orsburn)

MANILA, Philippines (CNS) — The Philippine Senate has begun hearing proposals from various sectors to pass a law to legalize divorce in this predominantly Catholic country.

Two divorce bills pending in the Senate propose a six-month cooling-off period after couples file a petition for divorce as a final attempt at reconciliation between estranged spouses, reported ucanews.com. The agency reported some of the proposed grounds for divorce include physical violence, grossly abusive conduct, drug addiction, habitual alcoholism, chronic gambling, homosexuality, bigamy and infidelity.

Senate President Vicente Sotto said senators are unsure about divorce but may be willing to pass a bill allowing for the dissolution of a marriage. The Philippines is the only country besides Vatican City without a legal provision for divorce.

Several representatives of the Philippine bishops’ conference have reiterated their opposition to the legislation, saying divorce is anti-marriage and anti-family.

Father Jerome Secillano, executive secretary of the public affairs office of the bishops’ conference, called on legislators not to twist facts about divorce “just to suit a particular agenda.”

“Divorce can never be pro-marriage, pro-family and pro-children,” said the priest, responding to a senator who made that claim. He said divorce, if passed into law, would lead to the “disintegration” of families.

He admitted that marital relationships are not always perfect but added that there are legal processes already available to couples on the verge of separation.

Fenny Tatad of the Family and Life Office of the bishops’ conference said the proposal to pass a divorce law “is a misplaced concern.”

“The Philippines has a lot to teach, and the rest of the world has much to learn from the Philippines in defending the sanctity and indissolubility of marriage,” said Tatad.

She said marriage is “a human institution, rather than the creation of any legislature, and should, therefore, be protected from any undue state interference.”

The Catechism of the Catholic Church considers divorce a “grave offense” against natural law as “it claims to break the contract, to which the spouses freely consented, to live with each other ’till death.” It also considers divorce “immoral” as it “introduces disorder into the family and into society.”

The catechism also says: “If civil divorce remains the only possible way of ensuring certain legal rights, the care of the children, or the protection of inheritance, it can be tolerated and does not constitute a moral offense.”

In the practice of Catholic marriage courts, an annulment is a decision that the apparent marriage was null from the start. It declares that since there was no sacramental marriage, there is no marriage bond. Most nations require a separate civil action of divorce or annulment to release the couple from the civil marriage bond.

A 2017 survey showed that half of adult Filipinos believe divorce should be legalized.

NEXT: Priesthood is a gift, not a job, pope says