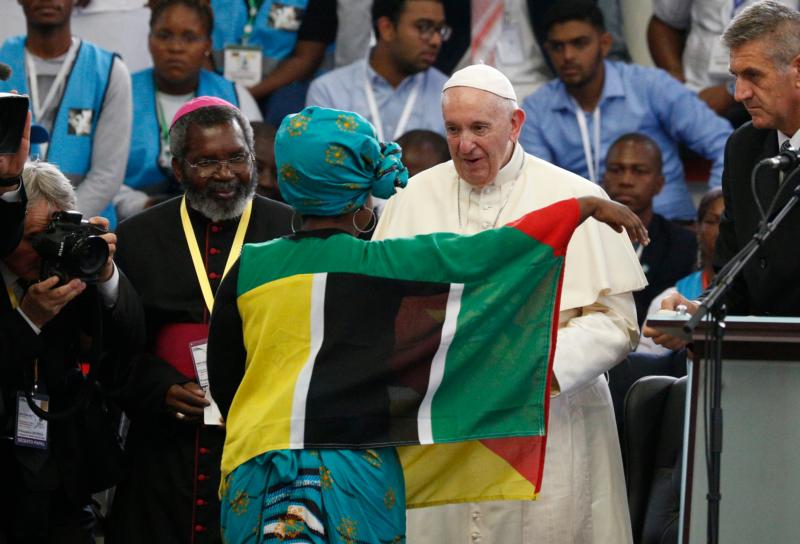 Pope Francis greets a young woman as he leads an interreligious meeting with young people at the Maxaquene Pavilion in Maputo, Mozambique, Sept. 5, 2019. (CNS photo/Paul Haring)

MAPUTO, Mozambique (CNS) — With a courtesy and solemnity seldom seen at a gathering of opposing political leaders, Mozambican politicians came together a month before their general election to welcome Pope Francis and pledge to work for peace and the common good.

The elections Oct. 15 will see the current president, Filipe Nyusi, leader of the Frelimo party, run against Ossufo Momade, leader of the opposition Renamo party, and against Daviz Simango, president of the Democratic Movement of Mozambique.

In the southern Africa country, party politics has not been simply a matter of policy arguments; Frelimo and Renamo were the main opponents in the Mozambican civil war, which raged from 1977 to 1992. Tensions rose again after contested elections in 2013 and grew so sharp that violence flared again. Nyusi and Momade signed a new peace accord Aug. 1.

Welcoming Pope Francis to Palacio da Ponta Vermelha, the presidential residence, Sept. 5, Nyusi had both his opponents stand for a round of applause as he pledged their intention to strive to be political leaders who work for the common good and not self-interest.

Pope Francis told the political leaders, as well as other civic leaders and ambassadors serving in Mozambique, that making peace takes more courage, strength and effort than waging war does, but that Mozambique’s own recent history shows how education, health care and the local economy all benefit from peace.

First, though, the pope publicly expressed his solidarity with all the Mozambicans still far from recovering from the cyclones Idai and Kenneth in March and April.

Both the pope and president said the nation still needs the promised international aid to help rebuild, but both also said Mozambicans’ reaction to the disasters showed how much solidarity, unity and sacrifice the nation’s people have.

The people of Mozambique have learned firsthand that peace requires “strenuous, constant and unremitting effort,” the pope said. “It demands that we continue — with determination but without fanaticism, with courage but without exaltation, with tenacity but in an intelligent way — to promote peace and reconciliation, not the violence that brings only destruction.”

Peace is a necessary requirement if the nation’s leaders are to fulfill their mission of serving the people, he said. “May you not desist as long as there are children and young people without schooling, families that are homeless, unemployed workers, farmers without land to cultivate.”

And, touching a theme expected to be repeated throughout his trip Sept. 4-10 to Mozambique, Madagascar and Mauritius, Pope Francis urged special care of the natural environment.

Apparently referring to the practices of multinational companies, the pope said governments and citizens must beware of “a tendency toward plundering and pillaging driven by a greed generally not cultivated by the inhabitants of these lands, nor motivated by the common good of your people.”

“A culture of peace implies a productive, sustainable and inclusive development, where all Mozambicans can feel that this land is theirs,” he said.

Myrta Kaulard, the U.N. resident coordinator in Mozambique told reporters, “It’s definitely a good day for peace and reconciliation,” and that, even without strong words, the country would benefit from Pope Francis’ presence.

She also said she was counting on the pope to bring a strong message on climate change, but it was even more important that the pope’s visit showed the world that Mozambique matters. “This, after all, is a quite remote country.”

The themes of peace, reconciliation and care for creation took center stage again at the pope’s next event: an interreligious meeting with about 4,000 young people from Mozambique.

The young people — Christians, Muslims and Hindus — started things off. They welcomed the pope to Maputo’s Maxaquene Pavilion with hands clasped, chanting over and over: “Reconciliation.”

Pope Francis, joining the spirit of the gathering, mostly followed his prepared text, but had the young people repeat several phrases as a chant, including “don’t give up” and “always together.”

At a gathering that began with songs and dances, the pope told the young people that “a shared and celebrated joy that reconciles is the best antidote to all those who want to create dissension, division and conflict.” Then he added, “Be attentive! They want to divide you!”

The pope grabbed the young people’s attention — and generated a roar of approval — by using as an example soccer great Eusebio da Silva, a Mozambican who played in Portugal in the 1960s and ’70s. He came from a poor family, but had big dreams and pursued them, the pope said. And, he fulfilled his dream by always being part of a team.

Extending the sports metaphor to the social and economic life of many nations, Pope Francis said, “Much suffering has been and still is caused because some people feel entitled to determine who can ‘play’ and who should sit ‘on the bench.’ Such people spend their lives dividing and separating.”

The pope told them that to build the nation they want and deserve they must act “by staying together despite everything that can divide you, by always looking for a chance to realize your dreams for a better country. But always together.”

Pope Francis also reminded the young people that, despite their religious differences, all of their faiths teach that God loves the people he created and that, in his eyes, each one has enormous worth.

The young people’s clapping, shouting and ululating stopped when the pope asked each of them to consider in silence how much God loves them. They bowed their heads.

“This love of God is simple, silent and discreet,” the pope said after he, the young people and the country’s bishops lifted their heads again. “It does not overpower us or force itself on us; it is not strident or flashy.”