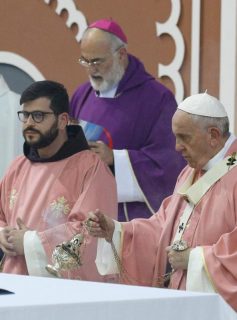 Pope Francis uses incense as he celebrates Mass at Prince Moulay Abdellah Stadium in Rabat, Morocco, March 31, 2019. In purple is Cardinal-designate Cristobal Lopez Romero of Rabat, who was one of 13 new cardinals named by Pope Francis Sept. 1. (CNS photo/Paul Haring)

VATICAN CITY (CNS) — Though Cardinal-designate Cristobal Lopez Romero was born in Spain, his dual citizenship with Paraguay has meant his friends in that South American country have been celebrating the fact that he will be their nation’s first cardinal.

“The church is everything in Paraguay,” where 89% of the population is Catholic, the 67-year-old archbishop of Rabat, Morocco, said after learning he would be one of 13 prelates elevated to cardinal in a consistory Oct. 5 at the Vatican.

Paraguay has never had a cardinal, he told the Madrid-based Catholic weekly, Alfa y Omega, which is why many Paraguayans have latched onto the fact he is a naturalized Paraguayan, telling him, “‘Finally Paraguay has a cardinal.’ I received hundreds, if not thousands of messages from there. I’m not exaggerating.”

Since 2018, the Spanish Salesian has headed the Archdiocese of Rabat, which has been a key city when it comes to interreligious dialogue and defending the rights of migrants.

In this country where more than 99% of the population is Muslim, the cardinal-designate ministers to a small Catholic community in the archdiocese of about 20,000 faithful — the vast majority of whom are foreigners, including many young people from sub-Saharan Africa.

He told Alfa y Omega in 2018 that his work is “to make grow, not the church, but the kingdom of God.”

“The church is not like Coca-Cola, which tries to win the Pepsi-Cola market,” he added.

Working for justice and peace is part of building the kingdom of God, he said, as well as being a “good Samaritan,” by helping others in need. The church in Morocco assists thousands of migrants with the help of local medical staff and educators, he said.

After he celebrated Mass that day, someone told him that the pope had named him a cardinal during the Angelus in Rome, but he scolded the person for “joking around.” It was only later when he saw a message from the nuncio that he understood it was real.

The news in Paraguay had “spread like wildfire,” he said, but not many in Morocco knew right away because “the media are not paying attention to these things, they may not even know what a cardinal is,” said the cardinal-designate, who studied and worked in journalism.

He told Alfa y Omega that the appointment was a sign of encouragement to the Catholic Church in Morocco and North Africa.

“The pope conveys a message with each appointment. And I think in this case he is saying: ‘I want to promote interreligious and Islamic-Christian dialogue.’ He is saying: ‘Take heart, minority churches of North Africa, your witness is important, not only for where you are, but for the universal church.'”

The cardinal-designate said he also believes it is “a nod to the Kingdom of Morocco, which has done and is doing so much to foster moderate Islam,” and which worked hard to help make Pope Francis’ visit there in March such a success.

It is also a sign of encouragement for interreligious dialogue, he said, adding that there could be no other reason to elevate a man who has only been a bishop for one-and-a-half years.

Cardinal-designate Lopez told Alfa y Omega that he does not want people seeing his new role as a promotion. It is very important people understand that “being named a cardinal does not mean climbing one more step in a hierarchy.”

“We must banish this mentality of careerism,” which is very widespread, he said.

He said he has been telling everyone: “I cannot be promoted because I am already at the very top. I am a child of God by baptism. Is there anything higher than that?”

Through baptism, everyone has the same “diploma,” the same stature and the same “distance from the center, which is Christ. If we do not change this mindset about the church, we will always have problems,” he said.

If people believe there is a “ladder” in the church and women can only go up one or two steps, “they will rightly feel discriminated against. But if it turns out that the highest point is to be a child of God, we all have the same dignity.”

He was born May 19, 1952, in Velez-Rubio, Spain, near the coast facing Algeria in North Africa. He completed studies in philosophy and theology and received a degree in journalism and information science from the Autonomous University of Barcelona.

He was ordained a priest of the Salesians of St. John Bosco on his 27th birthday in 1979.

He worked in youth ministry in Spain and Paraguay. He directed the Salesian bulletin in Asuncion, Paraguay, before becoming a parish priest there. He served as provincial of the Salesian province of Paraguay and taught at the College of Asuncion.

He spent eight years in Morocco as head of the Salesian community in Kenitra and director of a number of ministries at the order’s vocational center there.

In 2014, he was elected provincial of the Salesian province of Bolivia, then went on to head the province of Maria Auxiliadora in Spain.

Pope Francis then appointed him archbishop of Rabat, where he was installed in March 2018. A few months later, the pope also made him apostolic administrator of Tangier, a see that has been vacant since May.

PREVIOUS: Vatican archivist, award-winning poet, to be made a cardinal