Vatican archivist, award-winning poet, to be made a cardinal 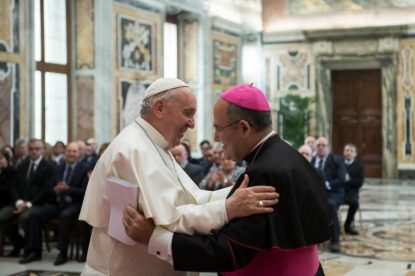 Pope Francis greets Cardinal-designate Jose Tolentino Calaca de Mendonca, archivist of the Vatican Secret Archives, during an audience with officials of the archives at the Vatican March 4, 2019. The archbishop was one of 13 new cardinals named by Pope Francis Sept. 1. (CNS photo/Vatican Media)

VATICAN CITY (CNS) — Like many others who were named cardinals by Pope Francis, Cardinal-designate Jose Tolentino Calaca de Mendonca was caught off guard when he found out about his appointment.

“I was celebrating Mass in a small chapel in Lisbon (Portugal) and, at the end of the celebration, I received the news from other people,” the 53-year-old cardinal-designate told Vatican News Sept. 2.

Cardinal-designate de Mendonca, who currently serves as Vatican archivist and librarian, was among 13 prelates from around the world whose names were announced Sept. 1 as new cardinals by Pope Francis during his midday Angelus address.

The announcement, the cardinal-designate said, reminded him of Jesus’ command to “look for the last place.”

“I felt this very clearly in the call that the Holy Father has made to me which, in fact, is a call to a more radical service and great humility in collaboration with the Holy Father and in unity with the whole church,” he said.

Born Dec. 15, 1965, on the island of Madeira, he was ordained to the priesthood in 1990. He published his first book of poems, “Os Dias Contados” (“The Days Counted”) the same year of his ordination.

In addition to being an award-winning poet, he is a biblical scholar and a consultant to the Pontifical Council for Culture.

While serving as vice rector of the Catholic University of Lisbon, he was asked to lead the meditations for the 2018 Lenten retreat with Pope Francis and top members of the Roman Curia.

Then-Father de Mendonca gave 10 talks during the retreat, beginning with a meditation titled “Apprentices of Awe.” The other presentations include examining the meaning and experience of thirst, “the thirst for nothing,” “the thirst for Jesus,” tears and thirst, desire and “the beatitude of thirst.”

Pope Francis will create the new cardinals during an Oct. 5 consistory at the Vatican.

NEXT: Red hat for Rabat gives greater visibility to minority church in Morocco