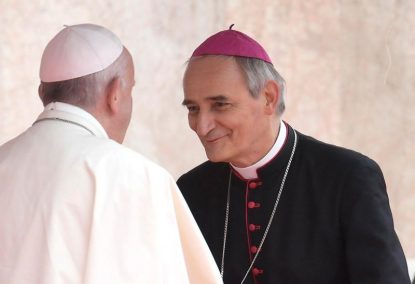 Pope Francis greets Archbishop Matteo Zuppi of Bologna, Italy, during his visit to Bologna in this Oct. 1, 2017, file photo. The archbishop is one of 13 new cardinals to be created by the pope at an Oct. 5 Vatican consistory. (CNS photo/Vatican Media)

VATICAN CITY (CNS) — Cardinal-designate Matteo Zuppi will join a 400-year-long list of archbishops of Bologna who also were cardinals, but his appointment to the College of Cardinals has more to do with his style of ministry than his job title.

A member of the Rome-based Sant’Egidio Community for almost 50 years, the new cardinal rides his bicycle around Bologna and is known for his particular care for and personal relationships with the elderly, the poor and migrants.

While still in his 30s, then-Father Zuppi was one of the Sant’Egidio members directly involved in mediating an end to the civil war in Mozambique. The peace accord, signed in Rome Oct. 4, 1992, lists four mediators: a representative of the Italian government, a Mozambican archbishop, the founder of the Sant’Egidio Community and Father Zuppi.

Returning to Rome Sept. 10 after a visit to Mozambique, Madagascar and Mauritius, Pope Francis told reporters that every peace process has highs and lows, but what is important is to get people talking and to persuade them to keep talking to one another no matter what arises.

Speaking specifically of the Mozambique peace process, the pope said, “From the beginning, in a cafe in Rome, there were people who were talking to each other; there was a priest from the Sant’Egidio Community who will be made a cardinal Oct. 5.”

Matteo Zuppi was born in Rome Oct. 11, 1955, as the fifth of six children. He has one sister and four brothers. Answering questions from students in 2016, he said that growing up he’d think how great it would be just once to have a new coat, instead of a hand-me-down, but his large family “is where I learned to share.”

He also told those students that although his parents were very religious, he was not that interested until he encountered the Sant’Egidio Community “and I began to understand the Gospel in a more living and personal way.”

He entered the Palestrina diocesan seminary, about 25 miles east of Rome, and studied at the Pontifical Lateran University, earning a degree in theology. He also earned a degree in the history of Christianity from Rome’s La Sapienza University.

Ordained to the priesthood for the Diocese of Palestrina May 9, 1981, most of his pastoral work took place in Rome, and he was incardinated into the Diocese of Rome in 1988.

Always close to the headquarters of Sant’Egidio, he served for almost 20 years as rector of the nearby Church of the Holy Cross and as assistant pastor of the Basilica of Santa Maria in Trastevere from 1981 to 2000 before becoming pastor of the parish. On a diocesan level, he served on the priests’ council and as prefect of the Trastevere area parishes.

In a 2015 interview with the magazine Famiglia Cristiana, then-Archbishop Zuppi said his experience and formation within a lay community led to having a “role of priesthood that isn’t very clerical. And, as the pope says, clericalism is an illness in the church. I learned to live my ministry together with my lay brothers and sisters, discovering the enormous richness of the church, which has different charisms that are all necessary for communion.”

In 2012, he moved out of Rome’s historic center to become pastor of one of the largest parishes on the outskirts of the city, Sts. Simon and Jude in Torre Angela.

Pope Benedict XVI named him an auxiliary bishop of Rome in early 2012, and Pope Francis named him archbishop of Bologna in 2015.

Italian newspapers have reported that Cardinal-designate Zuppi’s maternal great-uncle was Cardinal Carlo Confalonieri, who was dean of the College of Cardinals at the time of his death in 1986.

The only archbishop of Bologna not named a cardinal in the past 400 years was Archbishop Enrico Manfredini, who led the archdiocese for only eight months in 1983 before he died at the age of 61.

When Pope Francis made his Sept. 1 announcement of the names of the new cardinals, Cardinal-designate Zuppi was in Lourdes, France, with a pilgrimage of sick people from his diocese.

He thanked the pope for his “trust and esteem” and said the nomination was “a recognition of the church of Bologna and of the community to which I have belonged for many years.”