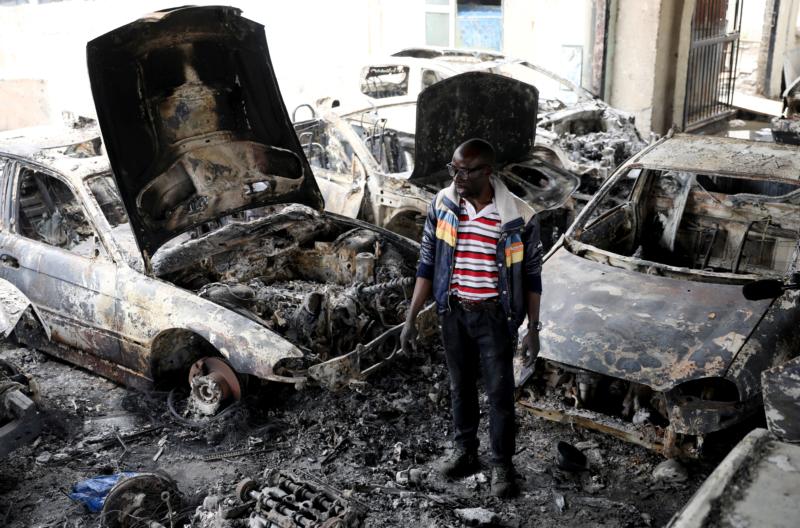 Nigerian entrepreneur Basil Onibo, one of the victims of the latest spate of xenophobic attacks in South Africa, looks at the burned cars at his dealership in Johannesburg Sept. 5, 2019. (CNS photo/Siphiwe Sibeko, Reuters)

UPDATED – LUSAKA, Zambia (CNS) — Zambia’s bishops urged South African leaders to do more to stop xenophobic attacks, and a South African archbishop warned of a rising tide of hatred and violence in the country.

“Xenophobia and its resultant chaos are not just criminal but cruel, barbaric and abominable,” Zambia’s bishops said in a Sept. 7 statement titled, “You were once foreigners in a foreign land.”

At least 10 people were killed, two of them foreign nationals, in a wave of riots and xenophobic attacks that began in late August in Pretoria and spread to nearby Johannesburg.

Pope Francis, speaking to journalists on the flight from Madagascar to Rome Sept. 10, also made a reference to the Nazis.

A journalist from Mozambique asked Pope Francis to comment on recent expressions of xenophobia afflicting the continent.

The pope said he had read about the violence in the newspapers, “but it is not just an African problem. It’s a human sickness like measles. It’s an illness that enters a country, a continent” and causes people to try to build walls. “Walls leave those who build them all alone; yes, they keep a lot of people out, but those who build walls end up alone and, at the end of history, defeated.”

“Xenophobia is an illness” that those infected try to justify, he said. They say they are acting for “‘the purity of the race,’ to mention a xenophobia from last century. And the (forms) of xenophobia often hitch a ride on so-called political populism. A week or so ago, I said that sometimes I hear things in some places that remind me of the speeches of Hitler in ’34.”

Africa also has the cultural problem of tribalism, he said, and Africans must learn to resolve it. “What is needed is education,” he said, and ways of “bringing people together so that from different tribes a nation can be formed.”

“We just commemorated the 25th anniversary of the tragedy in Rwanda; it was an effect of tribalism,” he said. Tribalism is “domestic xenophobia, but xenophobia nonetheless.”

Zambia’s bishops said they were “deeply saddened” by the attacks.

“We fear that if this trend is not curtailed, it may lead to … alienation of the citizens of South Africa from the rest of the continent,” they said in a statement signed by Bishop George Lungu of Chipata, president of the Zambian bishops’ conference.

South Africa’s leaders should not exacerbate the situation by turning a blind eye to the attacks or making inflammatory statements against African immigrants, they said. “What we are witnessing is a violation of the fundamental human rights” that everyone has, regardless of “religion, race, color, ethnicity and nationality.”

While “respecting people’s right to hold peaceful marches,” Zambia’s bishops urged “all Zambians to restrain themselves from any acts of violence or vengeance against South African nationals and their property or businesses.”

In early September, students in Zambia’s capital, Lusaka, protested outside the South African high commission and also targeted South African-owned shops. In Nigeria’s capital, Abuja, and largest city, Lagos, South African-owned businesses were targeted by protesters, who started fires and looted properties. Football federations in Zambia and Madagascar announced that they will not be sending teams to play South Africa, and Air Tanzania has suspended flights to Johannesburg because of the violence.

“We received reports of police standing by idly in Pretoria while shops were looted and people attacked,” he said.

“Let us be absolutely clear — this is not an attempt by concerned South Africans to rid our cities of drug dealers” nor “the work of a few criminal elements,” he said. “It is xenophobia, plain and simple.”

Church teaching “is direct and uncompromising,” Archbishop Tlhagale said, noting that God “isn’t just concerned about the foreigners. He loves them.”

Contributing to this story were Bronwen Dachs in Cape Town, South Africa, and Cindy Wooden aboard the papal flight from Madagascar to Rome.

PREVIOUS: Amid economic growth, pope urges Mauritius to care for the young, poor

NEXT: Congo’s cardinal-designate has lifelong passion for human rights