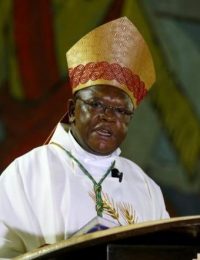 Congolese Archbishop Fridolin Ambongo Besungu of Kinshasa was one of 13 new cardinals named by Pope Francis Sept. 1. He is pictured celebrating Christmas Eve Mass at the cathedral in Kinshasa in this Dec. 24, 2018, file photo. (CNS photo/Baz Ratner, Reuters)

OXFORD, England (CNS) — Congo’s new cardinal will use his position to highlight Africa’s problems, while also bringing a lifelong passion for human rights to the international stage, said Catholic associates.

Msgr. Donatien Nshole Babula, secretary-general of the Congolese bishops’ conference, called Cardinal-designate Fridolin Ambongo Besungu of Kinshasa “a zealous pastor and a direct, straightforward man, who holds to the truth and knows what needs doing for the good of those entrusted to him.”

Pope Francis announced Sept. 1 that Archbishop Ambongo, 59, would be one of 13 new cardinals installed at an Oct. 5 Vatican consistory.

Msgr. Nshole told Catholic News Service that the cardinal-designate had gained extensive contacts and a deep awareness of conditions across Africa while heading the Congolese church’s Justice and Peace Commission, 2008-2016.

The monsignor said the appointment also was a tribute to Cardinal-designate Ambongo’s “strength of personality” and “intellectual capacity to see wider perspectives beyond the here and now” as well as a sign of the pope’s “concern for the poor and disadvantaged.”

“He’s already done very important work for peace and human rights, insisting everything must be founded on justice. This is what he’ll most seek to highlight now on the international stage,” Msgr. Nshole said.

Born into a rubber tapper’s family in Boto Jan. 24, 1960, Cardinal-designate Ambongo took final vows with Capuchin Franciscans in 1987 and was ordained in 1988 after studying moral theology at Rome’s Alphonsianum Academy. He taught at Kinshasa’s Catholic university and became superior of the Capuchins’ Congolese province.

In 2004, he was appointed bishop of Bokungu-Ikela and apostolic administrator of Kole, becoming archbishop of Mbandaka-Bikoro in November 2016 and archbishop of Kinshasa in December 2018 after nine months as coadjutor to Cardinal Laurent Monsengwo Pasinya.

Msgr. Andre Masinganda, the bishops’ conference deputy secretary-general, told Catholic News Service that Cardinal-designate Ambongo’s reputation for “frank speaking and firmness” had not prevented him from showing “pastoral openness to all” and a “shrewd capacity for synthesis in any given situation.”

“He’s certainly ready to receive and consider the views of others, and able to calm and unify,” the priest said.

“His motto, ‘Omnia Omnibus’ (All things for all people), implies his doors are open to all, whether in power or opposition. I think he’ll extend this into the world of politics and diplomacy,” he added,

Father Clement Makiobo, who studied with the cardinal-designate, told France’s Catholic La Croix daily his colleague had remained “passionate about justice and law issues” since opposing dictator Mobutu Sese Seko, who ruled then-Zaire from 1965 to 1997. He said the cardinal-designate also focused on defending democracy and legality rather than directly “opposing the power in place.”

“However, when the elementary rights of the Congolese people need protecting, and when it’s necessary to denounce the authoritarian drift of those in power, he’ll show himself intransigent,” Father Makiobo predicted.

“His appointment fulfills a life of commitment to human dignity, in a country where the church remains the only institution able to face up to power.”