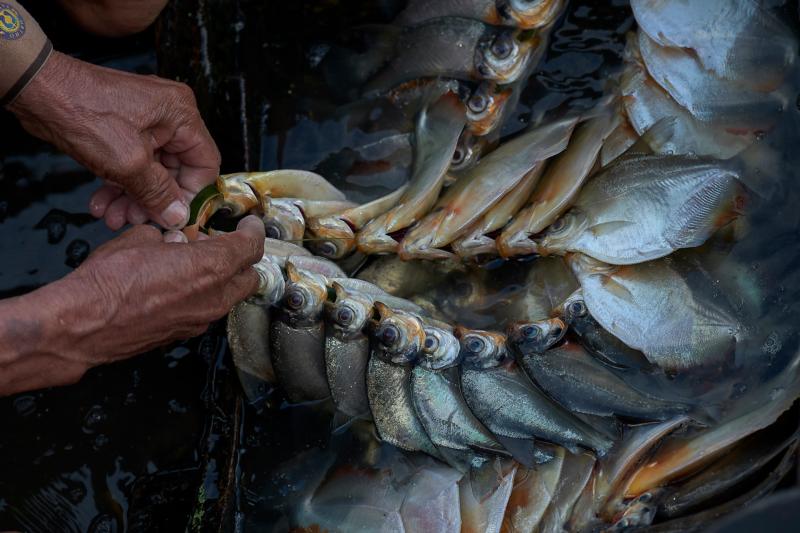 A fisher strings together fish he has caught in Santarem, a city alongside the Amazon River in Brazil’s northern Para state. (CNS photo/Paul Jeffrey)

VATICAN CITY (CNS) — The forests, rivers and swamps of the Amazon basin do many things. They lock away carbon and methane, two key greenhouse gases. They produce half of the rain that falls over the region. They are a source of timber, fruit and medicines.

But amid the forest of statistics — tons of carbon dioxide, inches of rainfall, export value of acai palm fruit pulp — people risk losing sight of the wonder St. Francis of Assisi felt when contemplating his brothers, wind and air, and his sisters, water and Mother Earth.

Many people have “a very disconnected view of creation and of humanity right now,” said Josianne Gauthier, secretary-general of CIDSE, a consortium of Catholic development agencies.

“We have detached emotion and faith and wonder and awe and recognizing the divine in all that surrounds us, and we’ve boxed everything into neat categories,” Gauthier, a special guest at the Synod of Bishops for the Amazon, told Catholic News Service.

Since the synod opened Oct. 6 participants, especially indigenous observers, have spoken of their deep bond with the earth. But where can Catholics turn to recover that sense of connection with all of creation, especially amid the concrete and traffic of cities far from the Amazon?

For Marie Dennis, it’s a single dogwood tree that she visits through the seasons in Washington, D.C., where she lives.

“I wait for it to flower in the spring and turn to this gorgeous red color in the fall,” said Dennis, former co-president of Pax Christi, who lives in the Franciscan-inspired Assisi Community in the capital.

“It is so easy for us to be completely alienated from the rest of the natural world” and just see it as resources to be used, she told CNS.

Look carefully, though, and connections with nature are visible almost everywhere, even where urban pavement seems to have steamrolled over the natural world.

“It’s the food we eat, or it’s the weed that pushes up through the crack in the sidewalk, or it’s the one tree on the block that manages to survive and to grow every year and to produce beautiful leaves,” Dennis said. “Or it’s the sun, or it’s the rain.”

Water is the great shaper of life in the Amazon basin, where rivers overflow their banks during the annual flood season, fertilizing the forest and filling the lakes with fish. It also connects all humans with the Amazon and with one another, Gauthier said.

“There has been no new source of water on this earth, ever,” she added. “It’s the same water that’s running through the earth and traveling, going up into the clouds and back again, and it’s been traveling through our bloodstreams and through our systems forever.”

That makes it more difficult to “deny the connection between ourselves and the water that we’re consuming,” she said. “If you recognize that you have value, then you have to recognize that the other elements of creation have value and have a right to be protected.”

Water flows through Pope Francis’ encyclical “Laudato Si'” and has been a theme at the synod. Indigenous participants carried a dugout canoe — the most basic form of transportation for peoples of the Amazon — in a procession to the synod hall during the opening prayer Oct. 7.

But water not only keeps people and ecosystems alive, it also links the past and the present, said Christiana Zenner, a theology professor at Fordham University in New York City.

When she encounters a river, she says, “I look at the way it plays, and how its force runs.” She also thinks about the things it has absorbed —nutrients for the forest, contaminants dumped by humans and the memory of peoples who live along its banks.

The synod also has highlighted the ways in which closeness to water, and to the earth, forges a common bond among indigenous people — a relationship that synod participants have emphasized repeatedly.

Although all people once shared that bond, the concept of progress embraced by industrialized countries has distanced many people from their ancient roots, Dennis said.

Pope Francis acknowledged that during his trip to Peru in January 2018 when he told Amazonian indigenous people that the church wanted to listen to them. From that encounter flowed the synod, where indigenous people from the nine Amazonian countries are participating as observers.

“We have an opportunity now,” she said, “to sit at the feet of so many indigenous communities who (historically) have had those relationships with water and earth and trees and sky that we lost along the way” and learn from them.