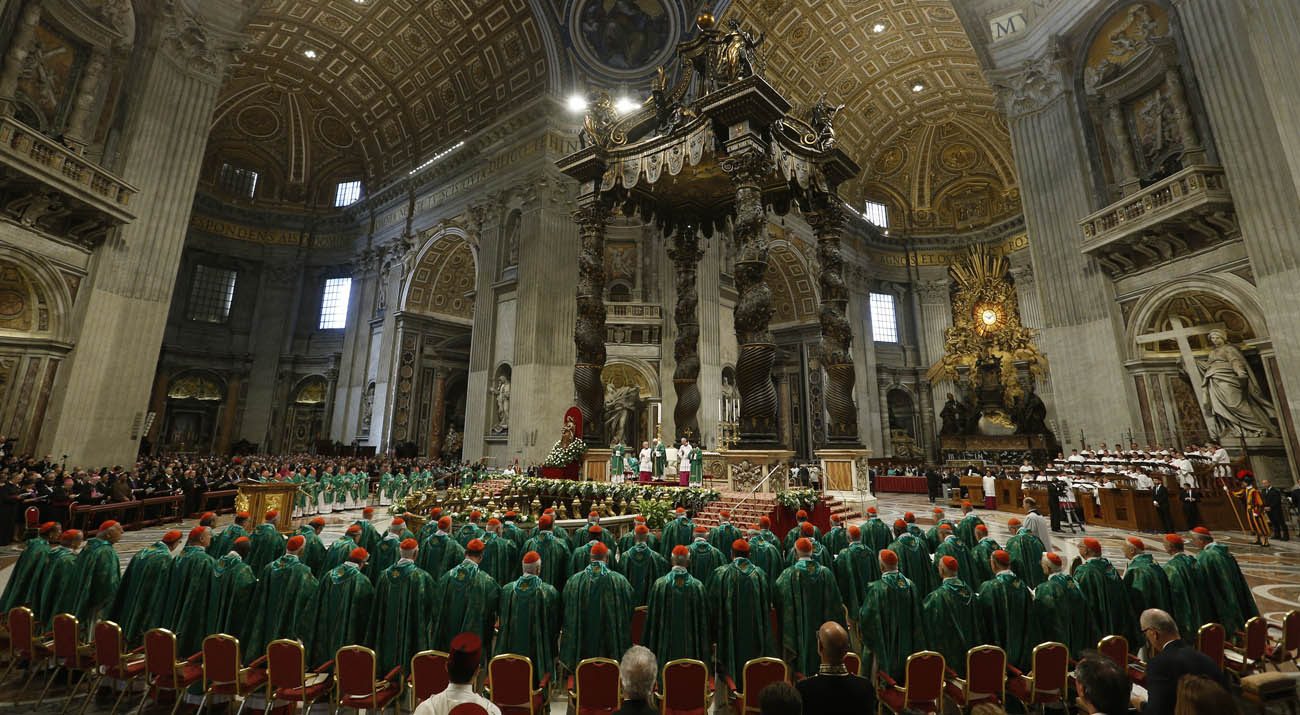 Pope Francis celebrates the opening Mass of the Synod of Bishops for the Amazon in St. Peter's Basilica at the Vatican Oct. 6, 2019. (CNS photo/Paul Haring)

VATICAN CITY (CNS) — The Catholic Church’s mission in the world is to spread the fire of God’s love and must not be limited to the “‘ordinary maintenance’ of those who already know the Gospel,” Pope Francis said.

Celebrating the opening Mass of the Synod of Bishops for the Amazon Oct. 6, the pope said, “Jesus did not come to bring a gentle evening breeze, but to light a fire on the earth.”

“If everything continues as it was, if we spend our days content that ‘this is the way things have always been done,’ then the gift vanishes, smothered by the ashes of fear and concern for defending the status quo,” he said.

Among the thousands filling St. Peter’s Basilica were members of various indigenous communities from the Amazon region. Some wore traditional headpieces while others painted their faces with ornate designs, proudly displaying the artistry of their cultures.

Several were chosen to present the offertory gifts during the Mass, solemnly walking up to the altar, some barefoot, and reverently bowing after presenting the gifts of bread and wine to the pope.

Jair Reis, one of about 1,200 Maragua Indians living in Brazil’s Amazonas state, attended the Mass. He told Catholic News Service he has received threats from miners who have entered his people’s lands illegally.

“We want our voices to be heard,” he said. “Not for me, but for all the indigenous people of Brazil.”

Jeremias Oliveira dos Santos, a Mura Indian also from Amazonas, said, “We need the support of the synod.” A large mining company has invaded the Mura lands. He hopes the synod will help call attention especially to the need to demarcate indigenous territories. His people’s demarcation is still in process, but Brazilian President Jair Bolsonaro has said his government will not give another centimeter to indigenous peoples.

“We are living peoples” who depend on the forest and rivers for survival, he said. “People living along the entire course of the Amazon are threatened.”

In his homily, the pope reflected on the day’s second reading from St. Paul’s Letter to Timothy. In it, the apostle reminds Timothy to “stir into flame the gift of God that you have through the imposition of my hands.”

Bishops, the pope said, have received the laying on of hands so that ” we in turn might be hands raised to intercede before the Father, helping hands extended to our brothers and sisters.”

The Holy Spirit, which “is not a spirit of timidity, but of prudence,” stokes the flames of God’s gift, he said.

“Some believe that prudence is a ‘customs control’ virtue that stops everything so as not to not make mistakes,” the pope said departing from his prepared remarks. “No. Prudence is a Christian virtue, a virtue of life. It is the virtue of governance. And he has given us this spirit of prudence.”

Citing the catechism of the Catholic Church, Pope Francis said that prudence should not be confused with fear; it is a “virtue that disposes practical reason to discern our true good in every circumstance and to choose the right means of achieving it.”

“Prudence is not indecision; it is not a defensive attitude,” he said. “It is the virtue of the pastor who, in order to serve with wisdom, is able to discern, to be receptive to the newness of the spirit.”

Fidelity to the newness of the spirit, he added, “is a grace that we must ask for in prayer.”

“May the spirit, who makes all things new, give us his own daring prudence; may he inspire our synod to renew the paths of the church in the Amazon so that the fire of mission will continue to burn,” the pope said.

“So many of our brothers and sisters in the Amazon are bearing heavy crosses and awaiting the liberating consolation of the Gospel, the church’s caress of love,” the pope said.

However, the pope also said that in the church’s history, there were times when peoples and cultures were “devoured without love and without respect.”

“How many times has God’s gift been imposed, not offered; how many times has there been colonization rather than evangelization!” the pope said. “May God preserve us from the greed of new forms of colonialism.”

Recalling the fires that devasted the Amazon region in August, the pope said that such fires are “set by interests that destroy” and “blaze up when people want to promote only their own ideas, form their own group, wipe out differences in the attempt to make everyone and everything uniform.”

Speaking off-the-cuff, Pope Francis recalled a conversation he had with Brazilian Cardinal Claudio Hummes, who often would visit the tombs of missionaries who died in the Amazon.

“With a bit of shrewdness,” he said, Cardinal Hummes told him, “‘Do not forget them. They deserve to be canonized.'”

PREVIOUS: Synod is a time to listen, discern, not despise, pope says