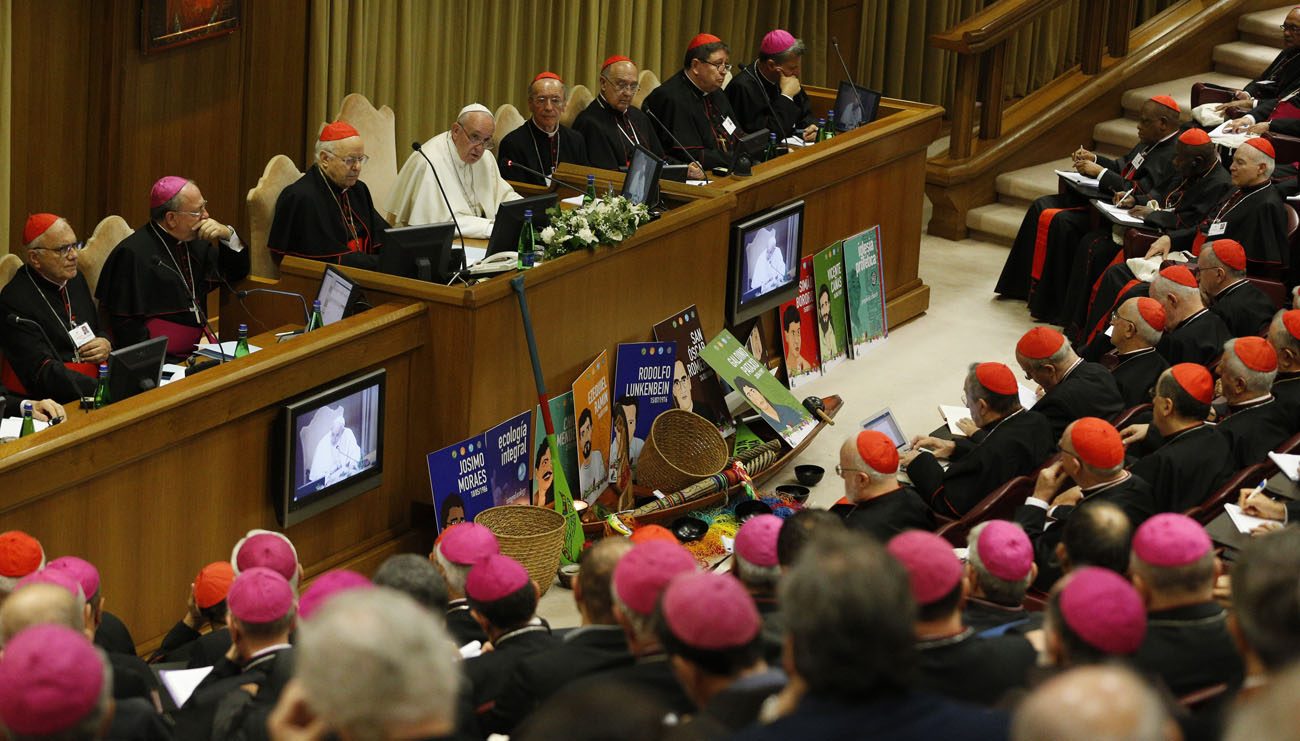 Pope Francis speaks at the start of the first session of the Synod of Bishops for the Amazon at the Vatican Oct. 7, 2019. (CNS photo/Paul Haring)

VATICAN CITY (CNS) — Climate change, water resources, inculturation and indigenous practices were among the topics discussed during the first afternoon session of the Synod of Bishops for the Amazon.

A few presentations also focused on the question of ordaining married “viri probati,” or men of proven virtue, as one possible way to help Catholics access the sacraments in very remote locations.

During the general sessions of the Oct. 6-27 synod, bishops have a maximum of four minutes to talk about one topic treated by the synod’s working document. The Vatican press office published a general summary of the different topics discussed during the closed-door session Oct. 7.

A few speeches touched on the role of “viri probati,” the press office summary said, adding that offering more frequent access to the sacraments where there was a lack of priests was a legitimate need. However, the summary said, such a provision could not be part of changing the essential nature of the priesthood and celibacy.

A different suggestion was to have vocational programs for young indigenous men in order to promote evangelization in remote areas so that there would not be “first-class Catholics” who have easy access to the Eucharist and “second-class Catholics” who go without the sacrament, sometimes even for two years at a time.

Another topic was the need to avoid the forms of “colonialism” that had characterized early missionary efforts, it said.

Cultural identities in the Amazon should be preserved since every culture makes its contribution to the “catholicity” of the church, which is built on respect and complementarity, the summary said.

Synod fathers recalled St. John Paul II’s teachings that Christ is able to reach and “animate” the heart of every culture; some described the church as being like a complex ecosystem with “wonderful spiritual biodiversity” expressed in so many different communities, cultures, forms of religious life and ministries.

Other presentations focused on indigenous practices, which, when they are not tied to superstitious beliefs, are looked upon with “benevolence” so long as they may become in tune with “the true liturgical spirit,” the Vatican summary said.

A synod member, it said, suggested collecting and sharing the different “inculturated celebrations” indigenous communities use with the sacraments of baptism, marriage and priestly ordination. Perhaps there might even be a way to establish on an experimental basis — and after appropriate theological, liturgical and pastoral study — an Amazonian Catholic rite for living and celebrating faith in Christ, someone suggested.

Some synod fathers talked about the need to protect the groundwater from chemical contaminants coming from multinational companies in the region.

The huge amount of mining in the region was brought up several times, the Vatican summary said, as well as concerns about the serious consequences abusive practices were having on local peoples.

A number of bishops, therefore, highlighted how both human and environmental rights need to be respected.

Discussions also turned to climate change, with one suggestion being an end to the use of fossil fuels, especially in industrialized nations which produce the most pollutants, it said.

The Vatican summary said there was also discussion about the way many young people are taking the lead in promoting “integral ecology” with special mention of the Swedish activist, Greta Thunberg, and the “school strikes for climate” campaigns.

The need to reach out to young people on issues dealing with safeguarding creation as well as promoting their efforts was mentioned several times, it said.

Young people today are more likely to recognize the need to develop a less “predatory” relationship with the environment, it said, so the church should take this as a positive opportunity to engage with them and help them see it as “a question of life or death” and not a passing trend.

Cardinal Reinhard Marx of Munich-Freising, president of the German bishops’ conference and member of the pope’s Council of Cardinals, focused his talk on the climate and the Christian understanding of having responsibility for creation.

“The climate is a global public good and we have the mission to protect it and preserve it for future generations,” he told the synod. His office released his text Oct. 7.

“This requires a rapid phaseout of fossil fuels and comprehensive ecological change,” which can come about only with certain international political and social frameworks and the adaptation of sustainable consumption and production.

“If we want to rescue the Amazon territory,” he said, “we need an integral ecology and a change of perspective that leads us to a new balance between mankind and nature and a peaceful coexistence of people.”

This also demands “an end to corruption, exploitation and global indifference and to review our actions again and again for the effects they have on nature and on people in the world,” the cardinal said.

PREVIOUS: Stress of fighting for land takes toll on indigenous peoples in Brazil