Synod must give hope to indigenous, not hollow words, participant says 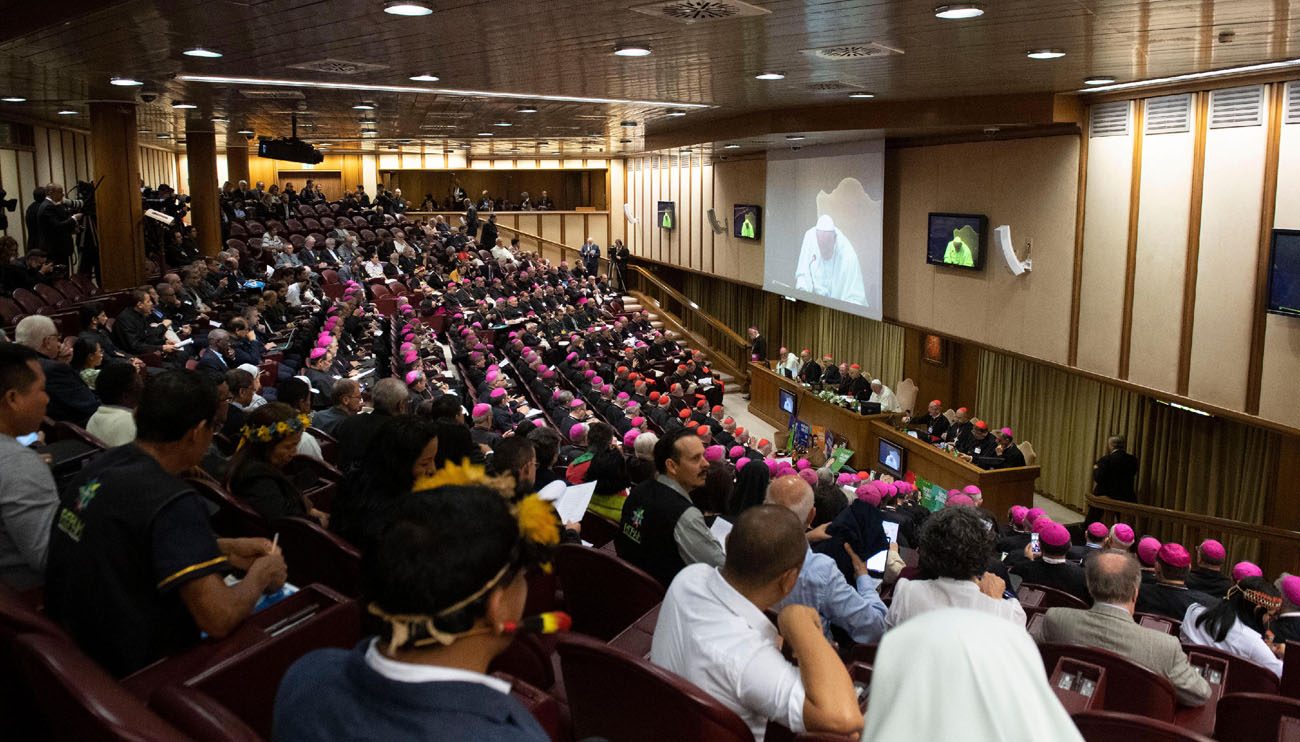 Pope Francis attends the first session of the Synod of Bishops for the Amazon at the Vatican Oct. 7, 2019. (CNS photo/Vatican Media)

VATICAN CITY (CNS) — Indigenous people are hoping that the Synod of Bishops for the Amazon will awaken the world’s conscience to their plight and not simply offer them lip service, an indigenous participant told Pope Francis.

During a Vatican news briefing, Yesica Patiachi Tayori, a member of the indigenous pastoral office for the Apostolic Vicariate of Puerto Maldonado, Peru, told journalists that her address at the synod hall Oct. 15 centered on the discrimination against indigenous people as well as the indifference they face from those who claim to fight climate change.

“We told the Holy Father that we are afraid because we are forgetting our language; it is being extinguished because we are asphyxiated by the models of development that come from outside that do not respect life,” she said Oct. 16.

In her speech, Patiachi said she “asked the pope to bring a message to the national and international organizations … so that they will not extinguish us a people, that our customs, our language are respected, and (they) let us live in self-determination.”

While social networks have offered a platform for many people who raise the alarm on the dangers of climate change, she continued, many of these “new defenders” rarely speak of “the reality of indigenous people” who have borne the brunt of environmental crimes.

“Our grandmothers, our mothers had already warned us about this climate chaos a long time ago,” Patiachi said. “The problem was that they were invisible. Why? Because not one journalist reported on their protests. On the contrary, they were persecuted and murdered.”

Patiachi said she expressed her and her people’s hope that the Synod of Bishops will awaken “the human conscience” and call attention to the threats against their territory, health and education because “currently, we have no court to denounce these crimes.”

“Where is the U.N.? Where are the OAS (Organization of American States) and other international organizations?” she asked. “The abuses, murders, so many victims of human trafficking, sexual abuse, the mistreatment of women; where do we go to report these crimes?”

She also expressed her hope that the synod does not “end up becoming a mercantilist discussion or just one of many political discourses in the world.”

“We want this to be the result of the human conscience so that we can start using renewable resources without placing any risks against humanity and the common home,” Patiachi said.