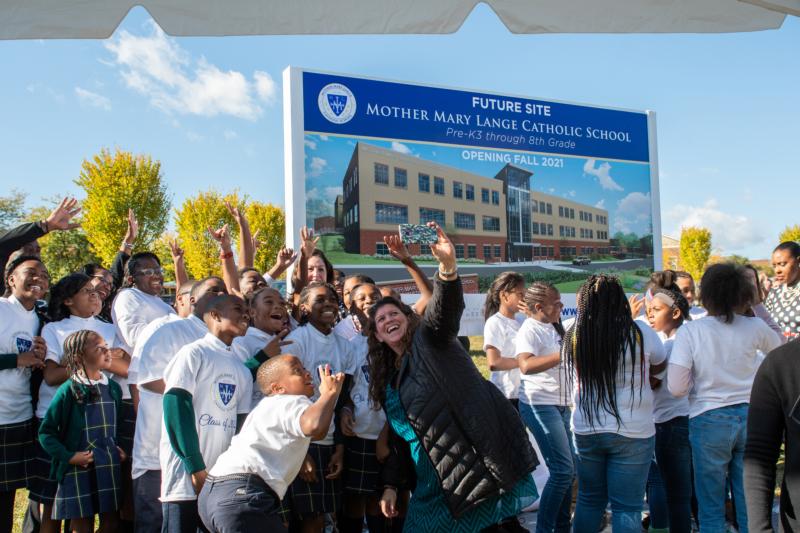 It’s a bold prediction, since none of the students attends the school — because it hasn’t been built yet.

The sixth graders currently attend Baltimore’s Holy Angels Catholic School and Ss. James and John Catholic School. Their schools will be combined and they will be joined by other students from the area when the new Mother Mary Lange School opens in the fall of 2021.

Jaylah Golder, a sixth grader who will be in the first class to graduate from Mother Mary Lange, said it will be great to have a new school in the community. She currently attends Holy Angels, hopes to spend a lot of time in the planned robotics lab, since she is in the robotics club at her current school. She may want to be a computer engineer.

Breanna Ervin, of Ss. James and John, said before the ceremony that she hopes to get to know the other students who will attend the school and has her career sights set, as well, as a courtroom lawyer. “I can’t wait until I win my first case,” she told the Catholic Review, Baltimore’s archdiocesan media outlet.

The two students are expected to be among 400 students on the campus when it opens; the school can eventually accommodate 520 students in pre-kindergarten to eighth grade with two classrooms per grade.

The 65,000-square-foot facility will include a chapel, a STEM (science, technology, engineering and math) suite, state-of-the-art classrooms, a gymnasium and athletic fields. The project is expected to cost $24 million, of which $20 million has been raised from foundations, businesses and individuals.

The archdiocese also wants to create two $2.5 million endowments — one for tuition grants and aid and the other for operating expenses and facility maintenance.

Baltimore Archbishop William E. Lori welcomed donors, civic leaders and community partners to the groundbreaking ceremony. He recalled how, four years ago, he walked the nearby neighborhood the morning after unrest in the city following the death of Freddie Gray after injuries sustained in police custody.

He said in talking with area residents, just blocks from the site of the new school, “It was clear to me then that people weren’t upset just at the death of Freddie Gray” but also of “being marginalized, of being cast aside, of being expected to settle for what was presumed to be a life predetermined for them by others, by circumstances outside of their control.”

“If the church and other institutions can’t stand with them in protesting these inequities, can’t help them envision a better life for themselves and for their children, then why are we here?” the archbishop said he asked himself.

“That is why the archdiocese is making a bold statement and an even bolder investment of $24 million in Baltimore City and in this neighborhood because we believe it is the right thing to do for our children and for this community,” he said to applause.

The archdiocese, along with public and private partners, expects to provide tuition assistance for 80% to 90% of the student body, most of whom will not be Catholics. He said the school would appreciate the continuation of the state BOOST program, which stands for Broadening Options and Opportunities for Students Today, and support from the archdiocese’s Partners in Excellence and Women’s Education Alliance, which aid low-income families.

Baltimore City Council President Brandon Scott, one of several civic leaders speaking at the ceremony, said he hears people say that Baltimore is dying or dead, but he doesn’t know what Baltimore they are talking about. Referring to the students with “Class of 2022” shirts sitting on the grass nearby, he said, “These young people will be the people who will build a better Baltimore.

The school is named for Mother Mary Lange, a woman of color who came to Baltimore from the Caribbean before the Civil War.

“Even in a city that had Southern sympathies and where slavery was still sadly practiced, she opened up a school for young women of color, St. Frances Academy, which exists today,” the archbishop said. Mother Lange founded the first school in her Baltimore home in 1828.

In 1829, Mother Lange also founded the Oblate Sisters of Providence “to do this work on a grander scale, as they continue to do,” Archbishop Lori added. It was the first religious order for women of African descent.

“I couldn’t think of a better patron for what we’re trying to do at this school which is to embrace and love young people, particularly young people of color, who live in our city and to offer them a place of safety and place a love, a place of respect and a place where they can flourish,” he said.

Sister Rita Michelle Proctor, an Oblate Sister of Providence and superior general of her order, founded by Mother Mary Lange, said the groundbreaking was one of the happiest moments in the 190-year history of the religious community.

The new school will be “a way of continuing Mother Lange’s legacy,” she said.

She said the canonization cause for Mother Lange is “in God’s own time, but that would be the greatest day in our community life for the school to change from Mother Mary Lange to St. Mary Lange.”