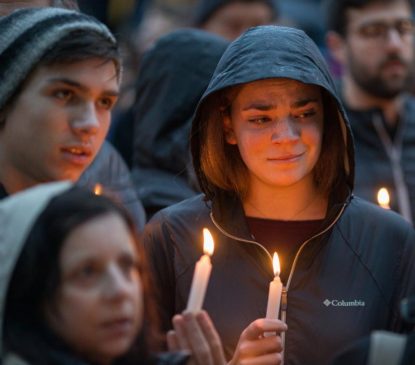 People mourn during a candlelight vigil Oct. 27, 2018, for victims of the shooting that killed eleven people at the Tree of Life Synagogue in Pittsburgh. In light of continued attacks on houses of worship and holy sites around the world, the U.S. Commission on International Religious Freedom held an Oct. 23, 2019, hearing at the Capitol to learn ways to deter such attacks. (CNS photo/John Altdorfer, Reuters)

WASHINGTON (CNS) — In light of continued attacks on houses of worship and holy sites around the world, the U.S. Commission on International Religious Freedom held an Oct. 23 hearing at the Capitol to learn ways to deter such attacks.

Easy and immediate solutions, though, were elusive.

“Houses of worship and religious sites are places that should be sanctuaries for believers to practice their faith,” said the commission’s chair, Tony Perkins. “States must ensure that religious sites are respected and protected” instead of “turning the sacred spaces into unimaginable sites of bloodshed.”

Sam Brownback, the U.S. ambassador at-large for international religious freedom, who testified at the hearing, said: “There’s an ongoing worldwide crisis,” calling it a “war on faith.” He cited reports that “dozens of Uighur cemeteries and mosques have been destroyed” by a hostile Chinese government.

“We hope we can usher in a new time of respect” for holy sites for all people of all faiths, Brownback added. “Humanity will be better off if they (sacred sites) are respected, protected and restored,” noting that Russia still has former churches being used as “hay barns.”

Too many, though, declare, “We destroyed this site,” Brownback said, “as if they were proud of what they’d done.”

The United Nations in September issued a plan of action to safeguard religious sites, hoping to fully implement the plan next year, according to Miguel Moratinos, high representative for the U.N. Alliance of Civilizations.

It is “an urgent task for all of us,” Moratinos said, adding implementation will be one of the most challenging tasks of his diplomatic career.

“The first component is education,” he said. “If we don’t furnish education, we will not be able to prepare a new generation” to honor and respect holy sites, Moratinos added.

Commission members and panelists alike discussed houses of worship and sacred sites being “hard targets” or “soft targets.” Moratinos noted some sites are “particularly vulnerable to violence because of their accessibility.” They rejected the notion of closing off access, he said, and then exclaim, “But we need protection!”

“We live in a complex world,” Moratinos added, “but we cannot neglect the religious aspect of our society.”

Hassan Abbas, a professor of international relations at the National Defense University in Washington, said houses of worship are supposed to be “a center for spirituality and peace,” but the attacks over the past year in New Zealand, Sri Lanka and the United States “suggest the trend is going in a different direction,” adding that many still remark that such attacks were “never supposed to happen in the United States.”

For survivors of such attacks, fear and “waiting for the next attack” are the main reactions, Abbas said, adding, “They can be sitting ducks in front of these terrorists.”

“There is something different now,” he said. He theorized that, because “religion has increasingly become the currency of dialogue,” that forces keyed more toward separation and isolation seek them out as the enemy. “All major shrines in Pakistan have been faced with suicide attacks,” Abbas said. The attackers, he added, “believe in their own God. … They just want their own version of Islam to be true.

Search for Common Ground, a nongovernmental organization, developed a “Universal Code of Conduct on Holy Sites,” which declares that “holy sites shall be preserved for present and future generations, with dignity, integrity and respect for their name and identity.” In one article dealing with expropriation, it says, “Where parts of a holy site have been nationalized in the past, the restitution of such property to the religious community should be encouraged.”

“It’s more of a normative agreement” than “the major focus of getting global sign-ons,” Katie Smith, the organization’s policy officer, told Catholic News Service Oct. 24. The Code of Conduct has been applied in Nigeria, Bosnia, Indonesia and Jerusalem, in partnership with other organizations to quell tensions.

During the hearing, Sharon Rosen, the Jerusalem-based global director of religious engagement for Search for Common Ground, outlined the organization’s work in Nigeria. There it engaged Christian and Muslim community religious leaders, both men and women, “to build consensus within their communities around the principle that holy places are sites for peace and reconciliation, and not targets for attack,” calling the effort itself “a unique step.”

Rosen quoted a Nigerian sheikh who observed that once a religious site is destroyed or a conflict is tagged as religious in nature, “everybody takes sides. If we can find a way of keeping religious sites, sacred places, out of the conflict and have an agreement about that, it becomes more easy to diagnose and treat the problems.”