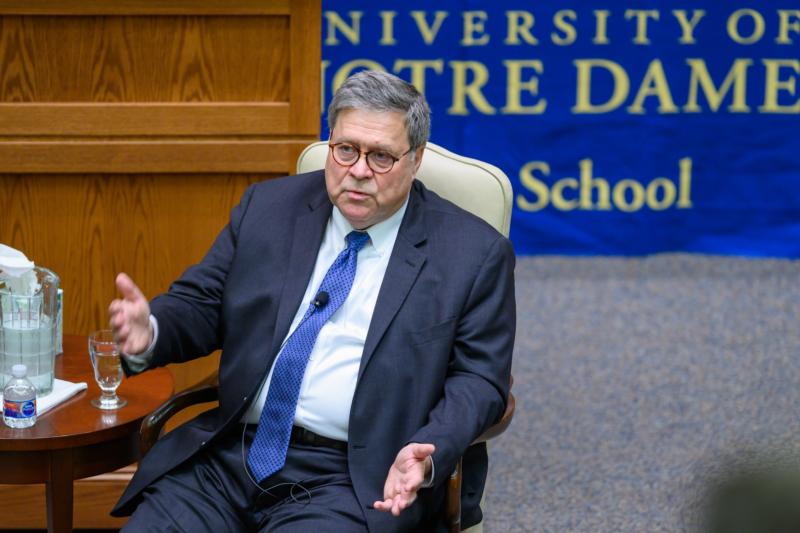 “Religion helps frame moral culture within society that instills and reinforces moral discipline,” he said, but “over the past 50 years religion has been under increasing attack” by secularists.

There has been a “steady erosion of our traditional Judeo-Christian moral system” and “a comprehensive effort to drive it from the public square,” he added.

He made the comments in an Oct. 11 address on religious liberty in America, which he called “an important priority” for the Trump administration and the Department of Justice.

Barr, a Catholic, spoke to the law school and Notre Dame’s de Nicola Center for Ethics and Culture. A text of his prepared remarks was posted on the Justice Department website.

He said a new task force within the department meets regularly and includes representatives from its various entities, including the Solicitor General’s Office, the Civil Division and the Office of Legal Counsel.

The group is alert to “cases or events around the country where states are misapplying the Establishment Clause in a way that discriminates against people of faith, or cases where states adopt laws that impinge upon the free exercise of religion,” Barr explained.

Today, he said, there is “a growing refusal to accommodate the free exercise of religion,” when “just 25 years ago, there was broad consensus in our society that our laws should accommodate religious belief.”

He pointed to the Religious Freedom Restoration Act, called RFRA, which passed by Congress in a bipartisan vote in 1993.

From the founding of this country onward, Barr said, “there was strong consensus about the centrality of religious liberty in the United States. … The imperative of protecting religious freedom was not just a nod in the direction of piety. It reflects the Framers’ belief that religion was indispensable to sustaining our free system of government.”

The U.S. Constitution “provides for limited government, while leaving ‘the people’ broadly at liberty to pursue our lives both as individuals and through free associations,” he continued, adding that underpinning a free society and self-government was the Founding Fathers’ trust “in self-discipline and the virtue of the American people.”

“Self-government,” he said, did not mean “primarily the mechanics” of selecting a representative government but “referred to the capacity of each individual to restrain and govern themselves.”

Religion promotes “the moral discipline and virtue needed to support free government” by first, giving us “the right rules to live by,” Barr said.

As Christians, the Founders believed Judeo-Christian moral standards were “the ultimate utilitarian rules for human conduct,” he added.

“They are like God’s instruction manual for the best running of man and human society,” said Barr, adding that “no secular creed has emerged capable of performing the role of religion.”

“We are told we are living in a post-Christian era,” he continued. “But what has replaced the Judeo-Christian moral system? What is it that can fill the spiritual void in the hearts of the individual person? And what is a system of values that can sustain human social life?”

Secularists promote “humane values,” he said, but “what undergirds these values? What commands our adherence to them? … (They) are really nothing more than mere sentimentality, still drawing on the vapor trails of Christianity.”

He sees “an unremitting assault on religion and traditional values” taking place today, which he described as “organized destruction” of religious values through mass communications, popular culture, the entertainment industry and academia.

These venues “promote secular orthodoxy” and “drown out and silence opposing voices,” Barr said, adding that the “high-tech popular culture” distracts people from the moral chaos going on around them. But this constant connectivity offers “limitless ways of indulging all our physical appetites,” he added.

Society’s “self-corrective mechanisms” are being suppressed, according to Barr. This can be seen, for example, in safe injection sites being promoted as the answer to drug addiction and abortion promoted as the solution for sexual irresponsibility, he added.

“Christianity teaches a micro-morality. We transform the world by focusing on our own personal morality and transformation,” Barr said. “The new secular religion teaches macro-morality. One’s morality is not gauged by their private conduct, but rather on their commitment to political causes and collective action to address social problems.”

Religion has never been forced on nonbelievers in this country, Barr stated, but today “irreligion and secular values” are being forced on people of faith.

He said he considers the nation’s schools “ground zero” for the attacks on religion. He pointed to states like New Jersey requiring by law that public schools adopt an LGBT curriculum “that many feel is inconsistent with traditional Christian teaching.” In many of these states, parents who object on religious grounds to this instruction for their children cannot opt out, he noted.

He also raised concerns about the Archdiocese of Indianapolis being sued over directing one of its high schools to fire a teacher in a same-sex marriage because such unions are contrary to Catholic teaching.

“I do not mean to suggest that there is no hope for moral renewal in our country,” Barr said. “But we cannot sit back and just hope the pendulum is going to swing back toward sanity.”

“As Catholics,” he said, “we are committed to the Judeo-Christian values that have made this country great. We know that the first thing we have to do to promote renewal is to ensure that we are putting our principles into practice in our own personal private lives. … It is hard to resist the constant seductions of our contemporary society. This is where we need grace, prayer and the help of our church.”

He urged a greater emphasis be placed “on the moral education of our children,” called for promoting and supporting “authentic Catholic education at all levels,” and asked all to “be vigilant” to keep secularization from driving religious viewpoints from the public square and impinging “on the free exercise of our faith.”

NEXT: With political will, countries can meet needs of refugees, speakers say