With political will, countries can meet needs of refugees, speakers say 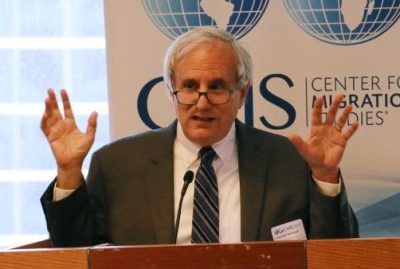 NEW YORK (CNS) — The plight of the world’s refugees will be solved by politics, not by appeals to conscience or awareness of the tremendous scope of the issue, said speakers at an Oct. 17 New York symposium on migration.

“You move states by forcing them to act,” said T. Alexander Aleinikoff in his keynote address.

“Stop calling this a humanitarian crisis. This is a totally manageable situation,” said Aleinikoff, director of the Zolberg Institute on Migration and Mobility at The New School in New York. “There are 25 million refugees and 7 billion people in the world.”

He said if the political will is present, it is realistic to “let career civil servants deal with it.”

Aleinikoff said refugees need the option to move from place to place so they can care for themselves, rather than being confined to camps. “We have to think beyond the traditional three responses to refugee situations. Resettlement, repatriation and integration into the host community are not working,” he said.

The daylong 2019 annual “Academic and Policy Symposium on Forced Migration, Protection and Border Control” was organized by the Center for Migration Studies. The center is a think tank and educational institute established by the Congregation of the Missionaries of St. Charles, also known as Scalabrinians.

Bishop Nicholas DiMarzio of Brooklyn told Catholic News Service the conference underscored that “facts and the truth have to form our policies, and not myths and misinformation about immigration and its impacts.”

The bishop, a member of the center’s board of trustees, said: “We have to speak truth to power, understand the issues and get to people who make a difference and be advocates.”

Rick Towle, acting director of the New York office of the UNHCR, the U.N. refugee agency, said the global system of refugee protection is based on two principles. First, refugees are an exception to state sovereignty and border control. The second, honored primarily in the breach, is the burden of caring for the world’s refugees should be shared in an equitable way.

Towle said, “Eighty-five percent of refugees are in countries that can least afford to look after them but do, by and large without complaint.”

He said “more privileged states” use physical and legal devices to prevent refugees from arriving legally. Subsequently, refugees turn to smugglers and traffickers. “Without rights and without solutions, you have a cocktail for human disintegration,” he said.

Towle said that “a multilateral process can yield dividends for states and people.” If the countries’ people leave and those they transit through working with the receiving countries and others that might provide financial support, a balance can be found to serve refugees in an orderly way and share the burden of their care.

“The only thing that’s normal now is chaos and confusion,” said Wendy Young, president of Kids in Need of Defense. Known as KIND, the organization aids migrants and refugees, particularly those along the southern border.

“The U.S. has relinquished its role in refugee protection,” she said.

Talk of the border wall, she said, now seems to be an archaic and rhetorical discussion in the face of a new “policy wall that is increasingly shutting down access to the U.S. asylum system.”

“The human costs of the policies are devastating,” Young added. She described a 19-year-old migrant who fled violence in her home country with her 13-year-old sister. Faced with a new system that “meters” arrivals of asylum-seekers in Mexico and can add months to the wait time, the older sister prostituted herself to get a place on the list for herself and her sister.

Bill Canny, executive director of the U.S. Conference of Catholic Bishops’ Migration and Refugee Services, described as “mean-spirited” the decision by the Trump administration to dramatically reduce the number of refugees admitted to the U.S. This deprives communities of the opportunity to interact with and welcome newcomers, Canny said, and prevents refugees from taking the opportunity to build and enrich the country.

Speakers said leadership is critical to improve the prognosis for refugees.

“People are looking for a sense of order in our process,” Young said. “There are lessons to be learned from the last two years.”

She said the government “manipulation of the law is frankly breathtaking” and the administration used loopholes to shut down the asylum system.

Legal representation is a key to successful claims, Young said. “Kids are five times more likely to be granted protection if they have a lawyer,” she said.

Susan Miller said of the 70 million people currently displaced by conflicts or human rights situations, most are in a situation of “protracted displacement,” that is, lasting more than five years. Miller is the Donald G. Herzberg professor emeritus in the School of Foreign Service at Georgetown University.

“Failure to address this global crisis of protracted displacement will waste human potential and lead to the irregular movement of people from poor to rich regions,” said John Thon Majok. He is a refugee from South Sudan and senior program analyst at the Woodrow Wilson International Center for Scholars.

Msgr. Robert Vitillo, secretary-general of the International Catholic Migration Commission, said: “In protracted situations refugees are seen not as people, but crises and emergencies. Their personhood is lost.” In addition, he said, “mental health issues get more complicated, people lose hope and feel there is no way out.”

Speakers said it is important to identify and address the “drivers” that lead people to make a mass exodus from their home country. It also is prudent to provide education to displaced people and job opportunities while they wait to return home or resettle.

Programs can help receiving countries develop a culture of integration and not just assimilation. International organizations can offer a debt moratorium for refugee host governments to free up money for public services and recognize the public good they provide.