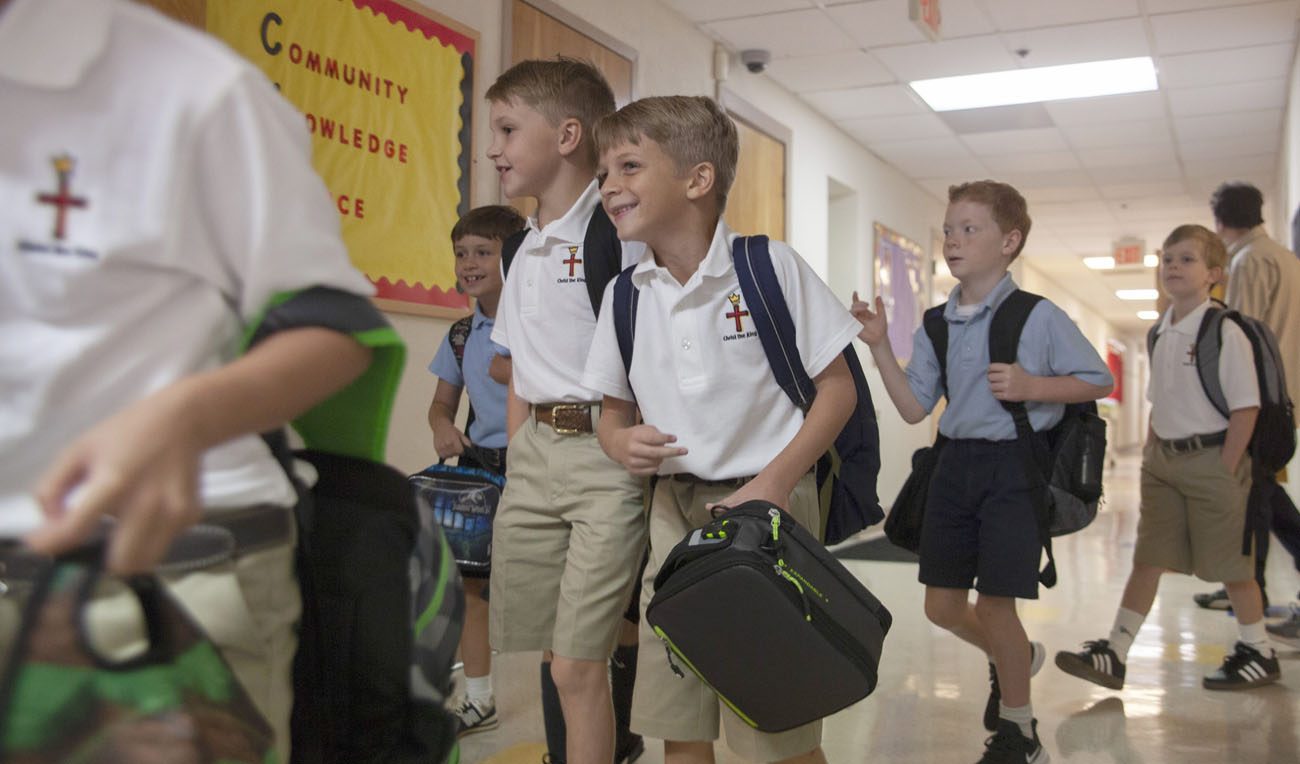 Third-graders walk through a hallway at Christ the King School in Nashville, Tenn. The mission and foundation of Catholic education are directly related to evangelization, said Thomas Burnford, head of the National Catholic Educational Association. (CNS photo/Rick Musacchio, Tennessee Register)

WASHINGTON (CNS) — The mission and foundation of Catholic education are directly related to evangelization, said the head of the National Catholic Educational Association.

Catholic schools are obligated to evangelize simply because that is the core and mission of the Catholic Church, according to Thomas Burnford, president and CEO of the NCEA.

“The apostles told the good news of Jesus Christ, and Catholic schools are an essential and integral ministry of the Catholic Church,” he told Catholic News Service.

Nationwide, 1.8 million students are enrolled in 6,300 Catholic schools, he noted. Additionally, 80% of students are Catholic, and the remaining 20% are non-Catholic.

Despite the percentage difference, the mission of Catholic education is the same for Catholic and non-Catholic students, Burnford explained.

“The teaching of the faith, the way we witness the Catholic faith fully to Catholic students is the same for all students. All students are invited and welcomed to participate fully in the whole culture of the school, the formation of the school and the life of the school,” Burnford said.

Evangelization is present within schools because students are presented with a Catholic worldview that reveals the reality of God and the Gospel through the curriculum, he said.

“In that way, we are evangelizing students by giving them a real understanding of the world and society. Everyone in a Catholic school is being moved along in the process of evangelization and outreach,” Burnford said.

Acknowledging the inherent relationship between Catholic education and evangelization in the presence of faith, community and identity, Pope Francis in a June 2018 address said: “Schools and universities need to be consistent and show continuity between their foundational mission and the church’s mission of evangelization.”

He delivered the address to members of the Gravissimum Educationis Foundation, which he established in October 2015 at the invitation of the Congregation for Catholic Education to commemorate the 50th anniversary of the Second Vatican Council’s Declaration on Christian Education.

In that same address, Pope Francis proposed a challenge to members of the foundation, which aims to renew the church’s dedication to Catholic education, saying: “To fulfill your mission, therefore, you must lay its foundations in a way consistent with our Christian identity, establish means appropriate for the quality of study and research and pursue goals in harmony with service to the common good.”

Elisabeth Sullivan, executive director of the Institute for Catholic Liberal Education, identified roles within Catholic schools that help bring Catholic and non-Catholic students together. “I think Catholic schools have a unique opportunity to provide hope in a world that is increasingly beset by hopelessness. A world without God is a world without hope,” Sullivan said.

Sullivan believes that Catholic education is uniquely distinct from other education systems due to its long tradition of conveying the inherent and inseparable relationship between faith and reason. Consequently, Catholic schools “restore what the industrialized model of education has stripped from the classroom — an understanding of the meaning and purpose of things,” she told CNS.

Catholic education asks the deeper questions, regarding the nature of something and its purpose, according to Sullivan. “Secular education can’t offer that, can’t decide on a meaning or a purpose, so it has to stay away, and therefore, it’s incomplete,” she explained.

Mary Pat Donoghue, executive director of the Secretariat of Catholic Education at the U.S. Conference of Catholic Bishops in Washington, expressed a similar viewpoint regarding evangelization efforts within Catholic schools. Donoghue said because formation in a Catholic school is integral, students are not solely taught religious doctrine in a religion course.

“What we seek to do is bring forward the church’s intellectual tradition and form their minds in all of the content and areas that they study. This is an excellent tool of evangelization because it exposes kids not just to Catholic practices, regarding prayer and liturgy, but also to a Catholic understanding of reality.”

Donoghue is hopeful that Catholic schools will continue to fulfill their mission of bringing children and young adults into a relationship with Christ.

As populations shift, she said, many Catholic schools will be located in new areas, creating a changing landscape. However, Donoghue said that Catholic education in America has been around for centuries and “will renew itself by turning toward the church’s own tradition and that can be the way forward in the future.”

PREVIOUS: Catholics among those arrested at protest over low refugee cap