Catholics among those arrested at protest over low refugee cap 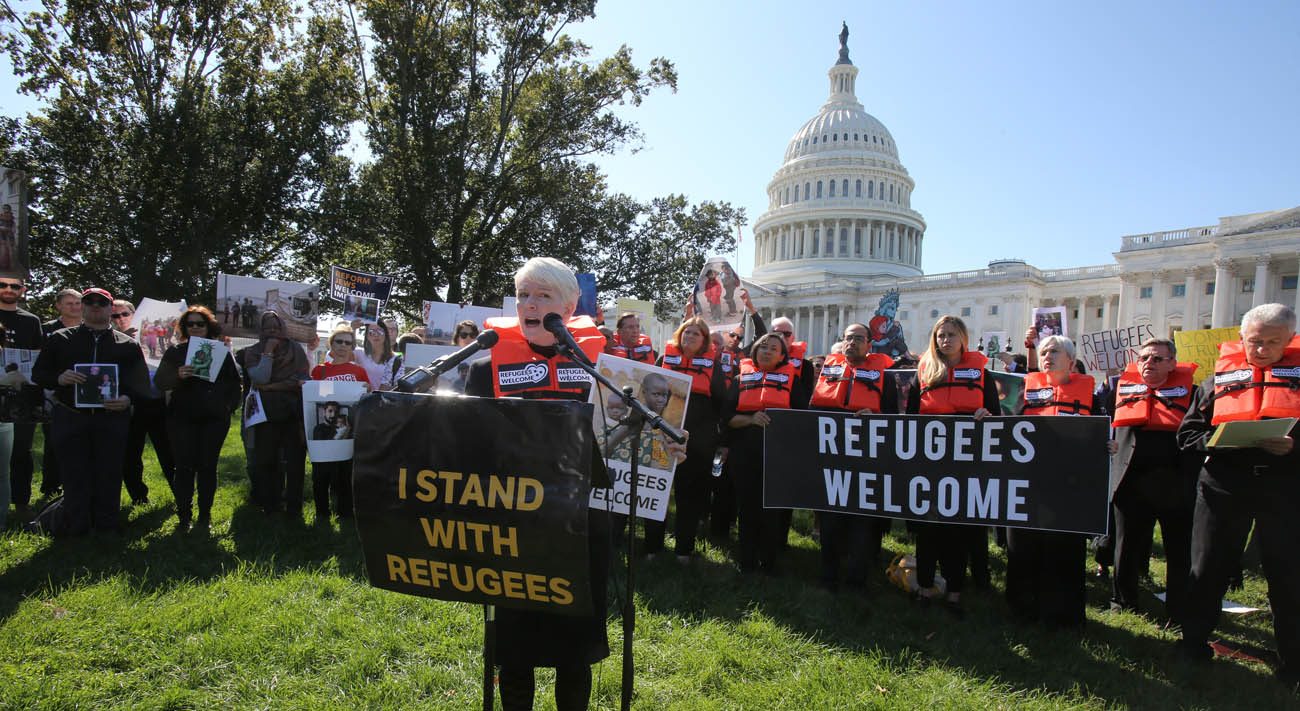 Susan Gunn, director of the Maryknoll Office for Global Concerns, speaks during a protest Oct. 15, 2019, outside the U.S. Capitol in Washington against the Trump administration's cuts in the number of refugees to be admitted under the U.S. resettlement program. (CNS photo/Bob Roller)

Some shouted “Jesus was a refugee” toward the Capitol as others, including a former U.S. assistant secretary of state for population, refugees and migration, were led from the steps of the U.S. Capitol in handcuffs in an act of civil disobedience.

Catholic groups, including the Franciscan Action Network and Maryknoll Office for Global Concerns, joined other Christian organizations, along with Jewish and Muslim groups demanding that the refugee cap be set at 95,000 for the upcoming fiscal year, and not the expected 18,000 the Trump administration has asked for. They also took issue with past characterizations by the administration insinuating some refugees enter the country to do harm.

“We are loyal citizens, we love this country,” said Nihad Awad, a Palestinian born in a refugee camp in Jordan, who is the co-founder and CEO of the Council on American-Islamic Relations.

Being allowed to live the U.S. “changed my life,” he said. “It moved me from despair to hope.”

He said efforts to shut the door to those like him, seeking safety, were “immoral and un-American.”

Jason Miller, of the Franciscan Action Network, participated in the event and showed up to support the program, as he once worked with refugee resettlement through Catholic Charities in Nashville, Tennessee.

“Refugees are some of the most generous, hard-working, and patriotic people I have ever met,” Miller said. “Despite the rhetoric, they are not terrorists. They are escaping war and persecution. We have a moral imperative as a nation of immigrants to reach historic norms of 95,000 refugees for Fiscal Year 2020 and, as Christians, we must reject any rhetoric that demonizes refugees and stokes fear and division.”

“I am happy to be here today and stand with others of faith and goodwill in solidarity for refugee resettlement. The refugees in camps and squalid conditions around the world are so desperate for a solution that we too need to take extraordinary action to make our leaders hear their cries,” he told Catholic News Service.

“As Pope Francis has said, welcoming the other, the migrant, is as much about us as it is about them,” Canny said. “While we have international legal obligations to adjudicate the asylum claims of those who come to our border, we do not have the same legal obligation to welcome those who languish homeless in refugee camps and often squalid ghettos.

“Our obligation to welcome them is moral, grounded in love and compassion, and that is why the refugee resettlement program, a legal pathway to be welcomed in the U.S. is about us, our convictions as a country, as a people — like refugees — also made in his image and likeness.”

Susan Gunn, director of the Maryknoll Office for Global Concerns, was one of the 18 arrested, along with Sister Maria Orlandini, of the Sisters of St. Francis of Philadelphia, who is a member of the Franciscan Action Network.

Gunn said that with so many crises and emerging displacement around the world, she couldn’t “stand by idly” as the United States turns its back on refugees.

“Our commitment to offer refuge to those fleeing violence and persecution, rooted in our faith and more than 100 years of Maryknoll mission, requires our government to demonstrate the moral leadership upon which our nation was founded,” she said. “To arbitrarily restrict tens of thousands of people from seeking safety would be to forsake our nation’s values of compassion, hospitality and welcome.”

Frank Sharry, founder and executive director of America’s Voice, which supports immigrants, also was arrested at the Capitol steps. He said he wanted to take the part in the event, even though he knew speaking out wasn’t likely to change the mind of the president, but he at least wanted Congress to know others were watching their actions.

Sharry said he also wanted to “take a stand,” and “say no to closed doors” for people seeking safety.

“Opening our hearts and our arms to refugees from around the world is foundational to the American experiment. Ours is a nation defined not by blood and soil but by shared ideas and ideals,” he said. “I am proud to stand up for one of America’s finest traditions, and I am heartbroken that this administration recklessly trashes it.

“It is actions like today that renew my faith that we the people will overcome the aberrant administration in power to restore our commitment to welcoming those who come to infuse the nation’s bloodstream with a profound love of freedom.”

Among some of the most notable arrested was Anne C. Richard, who was assistant secretary of state for population, refugees and migration from 2012 to 2017, under the Obama administration. She pleaded with lawmakers and touted the policy benefits to the U.S. that have come about because of the resettlement program.

“The program once had strong bipartisan support, since policymakers on both sides of the aisle understood that by resettling refugees, the United States serves as a moral leader and annually renews a promise on which our country was founded,” she said.

“Resettlement also supports U.S. foreign policy interests, including the fragile regional stability in the Middle East,” she continued. “Supporting the countries that host refugees through investment, humanitarian aid and resettlement is essential as globally more than 70 million people are displaced, including nearly 26 million refugees.”

She added: “By taking in some refugees, the U.S. can encourage other countries to keep their doors open and allow refugees to work and refugee children to attend school. That’s key to mitigating conflict, restoring dignity to those who’ve fled and ensuring a future for millions of young people.”