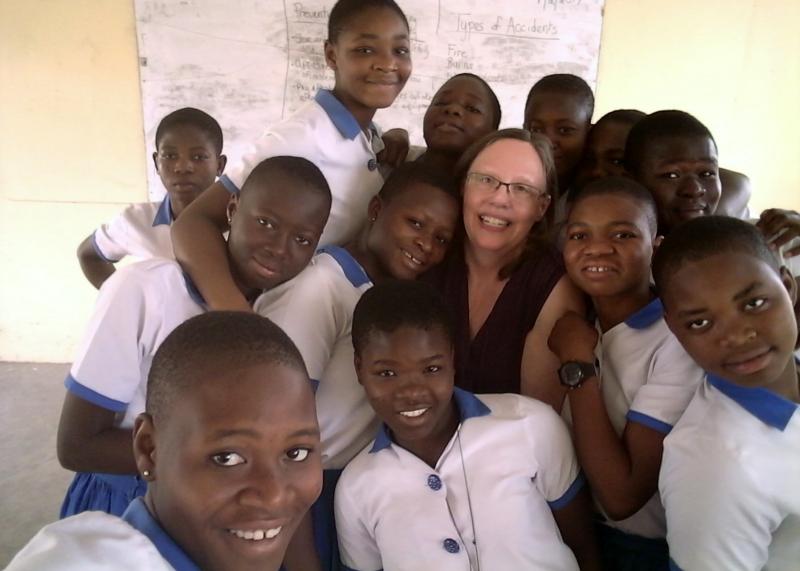 Diane Yonga, a Catholic from St. Paul, Minn., poses for a photo Feb. 7, 2019, with students at St. Anne’s Girls Senior High School in Damongo, Ghana. Her calling to be a missionary is being fulfilled through the Lay Mission-Helpers Association in Los Angeles and the Center for Mission in the Archdiocese of St. Paul and Minneapolis. (CNS photo/Diane Yonga, courtesy The Catholic Spirit)

ST. PAUL, Minn. (CNS) — Since learning about the Peace Corps in high school, Diane Yonga felt a tug that never went away to help the poor and hungry in Africa.

Decades later, her calling is being fulfilled through the Lay Mission-Helpers Association, a Catholic organization based in Los Angeles, as well as assistance from the Center for Mission in the Archdiocese of St. Paul and Minneapolis.

Yonga, a parishioner at the Cathedral of St. Paul, is about nine months into a three-year stint in Ghana in West Africa, teaching food and nutrition to students at St. Anne’s Girls Senior High School, a boarding school about three miles outside the town of Damongo, on a rutted, bumpy dirt road.

She also is the school secretary and the school’s storekeeper — keeping inventory and distributing food, household cleaning, office and school supplies.

Yonga lives in a bungalow with a missionary from Pennsylvania, also there through the Lay Mission-Helpers Association. Together, they shop in the open air market and attend church and school events and celebrations.

Yonga shared her story in emails and in a telephone interview with The Catholic Spirit, newspaper of the Minnesota archdiocese.

She believes she already is making a difference. For example, a girl sitting in the back of class wasn’t participating, her grades were not strong, and Yonga puzzled over how to bring her outside of herself and into the classwork.

So Yonga asked the students to present more information in class.

“She blossomed, presenting the information, showing what she knows,” said Yonga, who turned 60 Oct. 20, which was World Mission Sunday. “The last class of the semester she gave me a big hug. It made me feel like I did something to help her out.”

At the same time, she also is adjusting to cultural differences that include people placing relationships before making appointments on time.

“It’s a good value, people are important and time is not,” she said. But coming from the United States, where punctuality is prized, it has been an adjustment.

Ghanians also have traditional ways of addressing one another to show proper respect, and learning those nuances has been a challenge, Yonga said.

Yonga’s dream of serving in Africa was put aside when she got married. She learned more about the continent from her husband, who was from Cameroon, West Africa, and their network of friends.

They raised three children and when their youngest son started college, her dreams of missionary work were reignited. (The couple divorced in 2014.)

Yonga also had begun placing God at the center of her life with daily Mass, an hour of eucharistic adoration and adult religious education courses. She graduated last year from the Archbishop Flynn Catechetical Institute at the St. Paul Seminary School of Divinity in St. Paul, volunteered at a Catholic Charities’ homeless shelter and made the St. Paul cathedral parish her home.

One day, praying in bed, she heard God speak in her heart: “Now is the time.”

“I immediately grabbed my laptop and googled the Catholic Volunteer Network to find out more about long-term, overseas mission opportunities,” she said.

Within 24 hours, she connected with the Lay Mission-Helpers Association and began the complicated preparations for going overseas: medical checkups, immunizations, psychological testing and contacting references.

One month later she applied, attended a three-day discernment weekend at the association’s house in Los Angeles and was invited to a four-month formation and training program. She lived in community with “three other people who were feeling a similar calling,” she said. They did everything together — praying, going to Mass, cooking and eating meals, cleaning and attending classes.

Friends, family and cathedral parishioners are among her sources of financial assistance, as well as a $1,000 grant from the Center for Mission’s Mustard Seed Mission Endowment fund, which she can seek each year she serves.

Everything fell into place and appeared to be God’s will, Yonga said. That gave her the courage to leave her family and friends, her parish and venture across the Atlantic to Damongo.

It’s not been easy, but it’s been good, and full of surprises, Yonga said.

The heat is a challenge, with highs ranging from 99 to 112 and lows in the upper 70s and upper 80s. “Loss of electricity happens more frequently than I like; when there is no fan, one sweats all the time,” she said.

“They carry everything on their heads. You never see a woman carrying anything but a handbag in her arms — everything goes to the head,” she said. “Most of the farming is done by hand. We have one tractor with a small plow, but planting and harvesting is mostly done by hand.

“Animals: cows, goats, sheep, chickens are wandering all over. Everything is free range. Even in town, the animals can wander about. I often wonder how they know who is the owner of the various animals,” she added. “There appears to be no fear of someone stealing them.”

Belief in God is very evident, among Christians and Muslims, she said.

“Television is full of religious programming. Prayer is allowed and starts all meetings — even those government-sponsored events. I am not bringing God to these people. God is here.”

In fact, Yonga said, she is convinced that God called her to mission work not to change others, but to broaden and strengthen her own faith, so she could contribute to the need for everyone to reach out with more love to others.

She is learning that simple life can be fulfilling and that people all over the world want to be loved. Yonga also learns as much from the people in Ghana as they do from her.

“Sending me to Ghana — away from everything I am comfortable with — is stretching me to be a more rounded person, to become the best version of myself, to become the person God created me to be.”