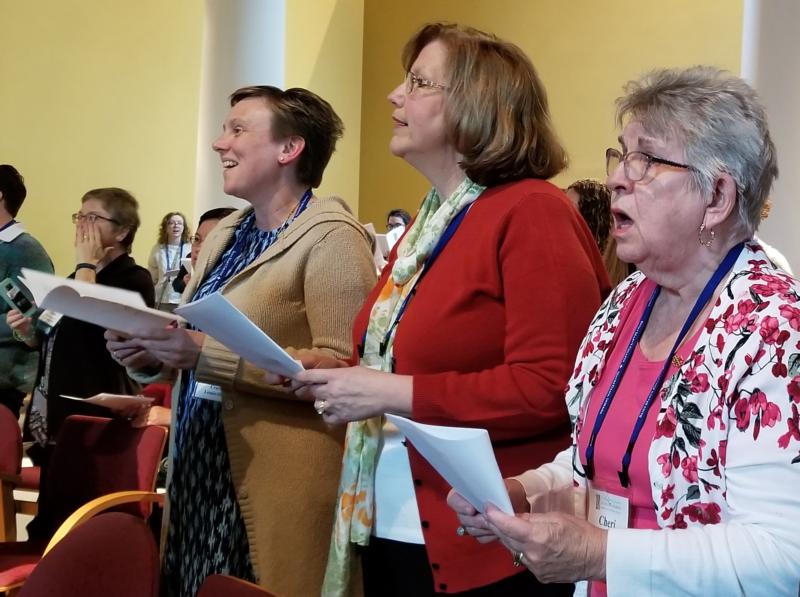 Women from the Archdiocese of Louisville, Ky., sing during Mass Oct. 19, 2019, at the Women of the Church Conference at St. Mary’s College in Notre Dame, Ind. Pictured are: Jane Cruthirds of Sacred Heart Academy; Janet Millen, who helped organize the 2016 Women of the Church Conference and a volunteer at St. Patrick Church; and Cheri Hall, who serves in prison ministry and is a deacon’s wife. The conference drew about 150 women and a handful of men to discuss the leadership of women in the church. (CNS photo/Marnie McAllister, The Record)

SOUTH BEND, Ind. (CNS) — The church needs the voices of women wherever important decisions are made — and it needs their voices now more than ever, speakers said during the three-day Women of the Church Conference.

The national conference, held Oct. 18 to 20 at St. Mary’s College in South Bend, drew 150 women of all ages — from college students to elderly religious — and a handful of supportive men.

The sexual abuse crisis and its cover-up by some bishops and other leaders has hobbled the church, said Kim Daniels during an Oct. 19 panel discussion on promoting women in church leadership positions. Daniels is the associate director of Georgetown University’s Initiative on Catholic Social Thought and Public Life.

“Catholic women have credibility in spades,” Daniels said. “We need to use that credibility to recover our voice in the public square” and elsewhere.

Daniels, who also is a member of the Vatican’s dicastery for communication and a consultant to the U.S. bishops on religious liberty, described herself as “right of center.” Promoting women in church leadership transcends right and left, she said, adding: “It’s something people agree on across lines.”

Daniels and other speakers also emphasized the need to encourage and form young women to become church leaders.

Kerry Robinson, founding executive director of Leadership Roundtable and a conference speaker, said young women must feel welcomed and see examples of female leadership in the church, if the church hopes to retain them.

Robinson said it is difficult to be Catholic right now, noting that the church “has ennobled me and at times broken my heart.”

She encouraged conference participants to consider why they remain Catholic.

“What do you love and value about your faith?” she asked them.

She noted that the Leadership Roundtable, a network of senior leaders in the church, believes the perspectives of lay leaders, especially women and other marginalized people, are important for good decision-making.

“Diversity matters; who is at the decision-making table matters,” she said, pointing to studies that have shown better decisions are made when there are diverse viewpoints.

Another speaker, Cecilia Gonzalez-Andrieu, associate professor of theology at Loyola Marymount University in Los Angeles, offered an impassioned presentation on what she called the broken, wounded and charred Catholic Church. Her talk was titled “#MineToo.”

Whether it’s a “perfect storm” or a “dumpster fire” engulfing the church — both phrases she deemed inadequate — the church is nevertheless a mess, she said.

People on society’s margins, including people in poverty and indigenous people, have the gift of “clear-eyed perspective,” Gonzalez-Andrieu said.

“The poor of the world can see most clearly what is wrong because they are close to the ground … and rely on God and each other,” she noted.

Gonzalez-Andrieu encouraged women to align themselves with them, to “immerse yourself in ‘la realidad’ (the reality) of the powerless.”

“Reach for Christ so it’s his power,” Gonzalez-Andrieu said.

Women are theology teachers and preachers, they lead social service and health care organizations, they are presidents of colleges and universities and lead critical diocesan ministries, as well as parishes in some dioceses.

“There are parishes that would hardly function without women,” Rosenhauer said, adding it’s important to “honor the already highly effective ministry women do in the church.”

“We cannot let our impact be diminished,” she told her listeners. “We need to own and lift up our place in the church.”

Rosenhauer also highlighted the role clericalism has played in what she called the church’s “unimaginable failure in leadership” during the abuse crisis.

Participants left the conference with a renewed sense of commitment to the church.

Jane Cruthirds, a theology teacher at Sacred Heart Academy in Louisville, Kentucky, asked several questions of speakers that were aimed at helping her as an educator of young women.

“It was important for me to attend the Women of the Church Conference to hear from female theologians and church leaders,” she said. “I have a renewed image of the church that values the wisdom of women as much as it loves and honors Mary, our mother.”

Layla Karst, both a presenter and participant from Loyola Marymount University, said she found the conference refreshing.

“After Dr. Cecilia Gonzalez-Andrieu’s talk, one participant stood up and thanked her by saying, ‘I just feel so seen.’ This, to me, captured the primary importance of the conference, an opportunity to gather together, to tell our own stories and listen to others, to see other, diverse women in leadership roles in the Catholic Church and to be seen ourselves,” Karst said.

“In a church that often encourages women’s leadership as long as it is done quietly and behind the scenes, being seen and heard allows us to begin to contemplate together the question of ‘what’s next’ for women in the church.”

The event was the second Women of the Church leadership conference. The first was held in 2016 at Monastery Immaculate Conception in Ferdinand, Indiana. It was organized in response to Pope Francis’ call for a “more incisive female presence” in the church in his 2013 apostolic exhortation, “The Joy of the Gospel.”

McAllister is editor of The Record, newspaper of the Archdiocese of Louisville. Contributing to this report was Jennifer Miller, who writes for Today’s Catholic, newspaper of Diocese of Fort Wayne-South Bend, Indiana.

PREVIOUS: Groups call for end to use of aborted fetal tissue in animal research

NEXT: Indiana Catholics share experiences of racism at listening session