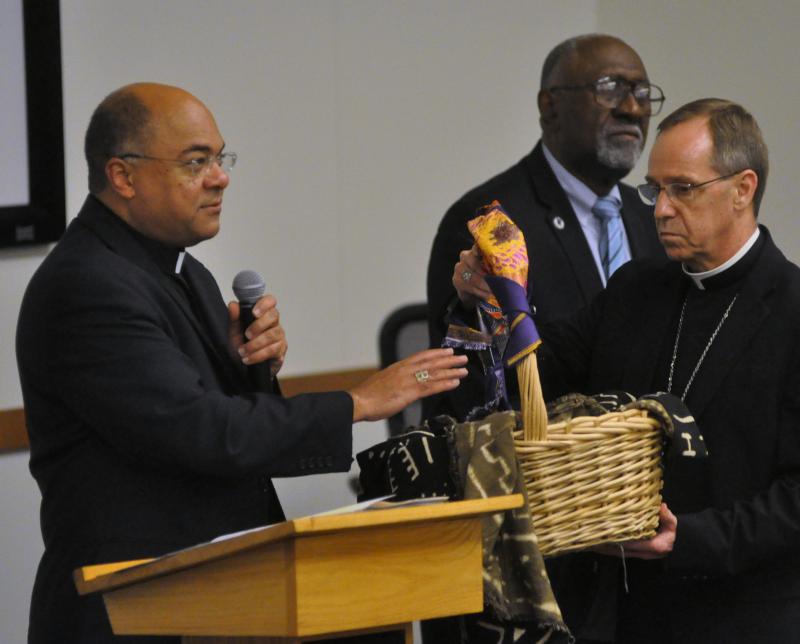 Indianapolis Archbishop Charles C. Thompson holds a basket containing people’s written accounts of experiences of racism as it is blessed by Bishop Shelton J. Fabre of Houma-Thibodaux, La., in Indianapolis Sept. 30, 2019. The blessing by Bishop Fabre, chairman of the U.S. Conference of Catholic Bishops’ Ad Hoc Committee Against Racism, came during a listening session on racism at Marian University. (CNS photo/Sean Gallagher, The Criterion)

INDIANAPOLIS (CNS) — It wasn’t easy for Daryl Whitley to stand before a diverse audience of listeners as he prepared to share his experiences of racism.

But he knew that doing so could promote justice and racial healing. So, crediting the Holy Spirit, Whitley told about 100 people at an Indianapolis archdiocesan listening session how he experienced racism as a teenager during a sporting event some 40 years ago.

Sharing the experience “was pretty liberating and kind of helped me to heal a little bit, because I normally don’t talk about this,” said Whitley, a black Catholic who is a member of Holy Angels Parish in Indianapolis. “I’ve never had to write it down and actually read it and share it with a large group of people, especially a diverse group of people.

“I was a little reluctant at first, but the Holy Spirit was there to help me to get through that.”

Those he addressed included teenagers, senior citizens and people of all ages in between; black, Hispanic and white Catholics; and laity, religious and ordained, including three bishops.

All were gathered Sept. 30 at Marian University in Indianapolis for a listening session on racism.

Whitley was one of 15 Indiana Catholics to discuss their experiences of racism. Each related how racism has affected them in schools, the business world, sports and the church.

White participants also testified how they have witnessed and been affected by discrimination against racial and ethnic minority groups.

The event was co-sponsored by the Archdiocese of Indianapolis’ offices of Human Life and Dignity and Intercultural Ministry in coordination with the U.S. bishops’ Ad Hoc Committee Against Racism.

The committee was established in 2017 following racial violence in Charlottesville, Virginia, and racial strife in other cities.

As the event started, Bishop Fabre reflected on the purpose of the listening session and others like across the country. He said such events can help the bishops “grow in our understanding of the aching pain of communities affected by racism and aching bewilderment of people who sometimes feel powerless to do something about it or wonder if they are unknowingly a part of the problem.”

“It is our prayer that we, as the Catholic Church, will not listen without being changed, that we will no longer see without being called to action,” Bishop Fabre said. “It is our hope that these listening sessions will be a part of an intentional decision on the part of dioceses in the country to continue or to begin to deal with the evil of racism.”

Beyond a time for people to share their stories, the listen session also was a spiritual event, beginning and ending with prayer.

Pearlette Springer, archdiocesan coordinator of Black Catholic Ministry, reflected afterward that “the environment changed” once the participants started sharing their stories. “It was almost like a sadness that this (racism) actually happened,” she said.

Hearing people’s stories and speaking with those attending the session was helpful for Whitley.

“What gives me hope is if one heart can be touched at a time and then that one person takes action,” she said. “I had a gentleman from Columbus come up to me afterward and said he was inspired by what I said. Then he told me what he’s trying to do to help battle … racism.”

Some people related experiences of discrimination against Hispanics in the U.S.

Saul Llacsa, archdiocesan coordinator of Hispanic ministry, was glad that a diverse group of storytellers took part in the listening session.

“It was a reality check,” he told The Criterion, newspaper of the Indianapolis Archdiocese. “Sometimes I don’t know about the suffering of my African-American brothers and sisters. Sometimes, we see our struggles and issues, but we don’t see what is going on in our neighbors’ house.”

At the end of the listening session, the written accounts of experiences of racism shared by those in attendance were collected and brought forward in a basket.

He also prayed that God might “ignite in all of us and open wide our hearts to hearing the stories of one another and to seeking to overcome racism as it continues to wound the family that you call together as one.”

The courage and thoughtfulness of the speakers at the event impressed Archbishop Thompson.

“Amid the sadness and woundedness of what we heard, we also heard passion and compassion,” he said. “Those who spoke did not speak out of despair or bitterness, but out of a great sense of hope and trust in the grace of God and what is possible for us as the family of God.”

“Open Wide Our Hearts: The Enduring Call to Love,” the 2018 pastoral letter of the U.S. bishops on racism, and resources to help promote justice and racial harmony are available online here.