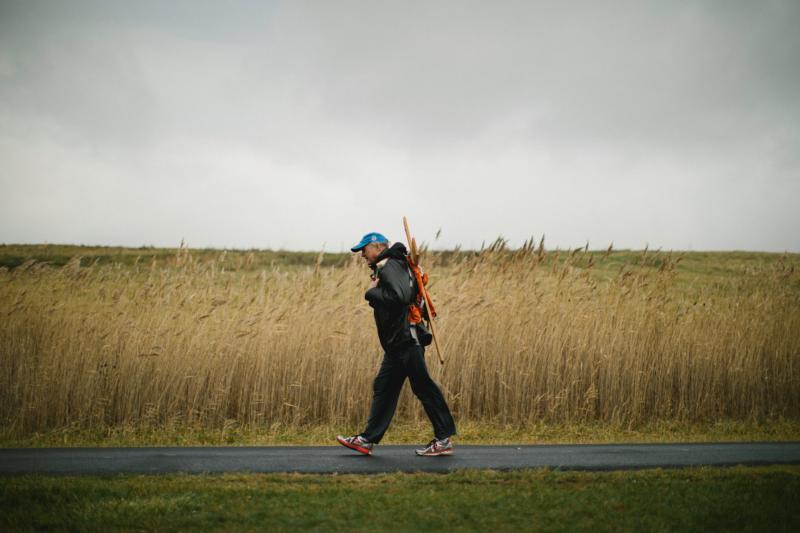 John Moore, a Knight of Columbus and past Grand Knight of Fray Marcos Council 1783 in Gallup, N.M., walks by a wheat field Dec. 3, 2018, near Dyer, Ind., during his cross-country pilgrimage to the 2019 March for Life in Washington. Moore walked 2,800 miles from San Francisco to Washington to pray for the unborn. His journey began April 8, 2018, and ended at the March for Life in Washington Jan. 18, 2019. (CNS photo/Spirit Juice, Knights of Columbus)

For John Moore, each step is a prayer. And when you’re walking the 2,800 miles from San Francisco to Washington, that’s a lot of prayer.

Last January, Moore completed a cross-country walk to pray for the unborn. Accompanied by his youngest daughter, Laura, who drove along in a support vehicle, he carried two crosses as he walked through deserts and mountains, rain and snow. The journey began April 8, 2018 — Divine Mercy Sunday — and ended at the national March for Life in Washington Jan. 18, 2019.

Moore is a member of Knights of Columbus Fray Marcos Council 1783 in Gallup, New Mexico.

“The reason I did the walk is because I wanted to thank and pray for the Knights and the March for Life because of all they’ve done, how they’ve brought awareness, and I wanted to give them those crosses,” Moore said.

Moore’s journey, his commitment to the faith and the unborn, makes him an everyday hero and the subject of a video series produced by the Knights of Columbus. The series highlights men and their families who do extraordinary things.

At age 67, Moore saw this pilgrimage as something he needed to do.

“I felt like I was called upon to do this walk, to humble myself before God, to be a witness for Christ,” Moore says in the Everyday Heroes video, shot while he was on his pilgrimage.

Moore’s daughter played a critical role in the journey, booking hotel rooms along the way, and standing ready to pick him up if he should find himself in need. Each day, Laura Moore drove him to where he left off the previous day.

“We have a lot of bonding time,” Moore said during the pilgrimage. “So, nine months of getting to be with one of your family members is a real treat, something I value.”

On any given day, logistical plans could change several times. The largest interruption occurred just after their arrival in Utah in June 2018, when they were forced to return home to take care of the family business.

“We weren’t able to return to the walk until August, which meant Dad had to walk further and harder every day than he planned,” Laura Moore said.

Despite some frustrations and miscommunications between father and daughter at times, Laura Moore said she is happy to be able to help her dad achieve his dream, one that she sees as very meaningful.

“I think that the pro-life struggle is a spiritual battle,” she said. “I think that when we stop respecting life at its purest, most innocent, no life matters, right?”

Moore first attended the March for Life six years ago and was inspired that one person — founder Nellie Gray — could initiate such a massive event for the pro-life cause. He wanted to do something to pray not only for the unborn but for all involved in the pro-life movement.

Having previously completed a 630-mile walking pilgrimage from Santa Fe, New Mexico, to Pilsen, Kansas, in honor of Father Emil Kapaun, a Korean War hero and chaplain, he decided to do an even longer one for the pro-life movement.

While the journey was a team effort between father and daughter, it also mandated a degree of solitude. For Laura Moore, the silence of being alone in the car provided an opportunity for prayer. By spending time praying the rosary and the Divine Mercy chaplet, she found it changed the way she viewed her own struggles.

“It’s all about how much love you put into it. And you can turn everything into a prayer,” she said. “And for me, I find that when I’m cold and I don’t want to be in the car, I can turn that into a prayer for somebody.”

In addition to praying novenas for life, supporting the Special Olympics and organizing Masses for people with special needs, the Knights recently donated their 1,000th ultrasound machine for pregnancy centers around the world. Such machines give women the opportunity to see their babies developing and help them choose life.

The Moores’ pilgrimage provided an opportunity to support the ultrasound initiative. Many people gave him a thumbs-up when they learned what his pilgrimage was all about, and some even offered him money. Moore accepted it but never kept it for himself — he donated it to the Knights so that more ultrasound machines could be installed.

“Being a Knight increases your faith,” he said. “If I wasn’t a Knight myself, I doubt if I would be walking right now.”

Of all the pilgrimages he’s made — he’s been doing them for 15 years — he sensed something special about this one in the way it affected people. His daughter speculates that prayer has a lot to do with it.

“When we did the walk, we weren’t holding signs, or screaming at anybody, or saying crass things to people who disagreed with us,” she said. “My dad walked, and we prayed every day and I just feel like I’ve seen those prayers come to life.”

Laura Moore works with her father at their family’s hotel business in Colorado. John Moore is a husband and father of six, one of whom helped manage the business during the pilgrimage. When he turns 70, Moore hopes to semi-retire and make more pilgrimages to Ireland and Spain.

Moore’s story shows that an ordinary Catholic man can apply his faith in an extraordinary way.